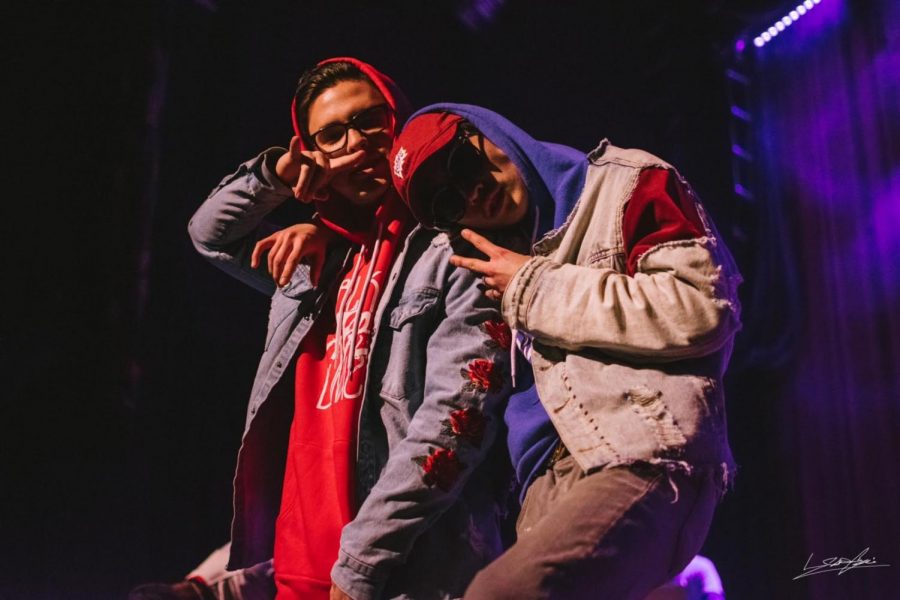 Colly & Whomptie perform at The House of Blues on January 21.

In college, it seems as though the smallest similarities with others can result in the greatest relationships. For rap duo Colly & Whomptie what sparked their connection was as simple as spelling the name Colin with only one “L.”

When communication junior Colin Monasterial, who is Whomptie in the duo, and marketing junior Colin Moe, who is Colly, met while rushing the Sigma Phi Epsilon fraternity, the two immediately knew they had a lot in common.

“After the one “L” conversation the rest was history. We’re low key actually the same person,” Colly said.

The San Diego based rap duo writes and creates hip hop and EDM music centered on the stories and experiences they have faced throughout their lives.

They said their diverse upbringing separates them from the normal rap stereotype and is one of the biggest influences on their music.

“A big difference is I’m white and Whomptie is Filipino. It breaks the stereotype compared to others,” Colly said.

The two have put a strong focus on releasing their music on Soundcloud and performing shows around the San Diego area. With the help of San Diego State and its Greek life, Colly & Whomptie were able to generate a fan base of their own.

“We were rushing Sig Ep and I don’t think either of us really intended on rushing a fraternity. We rushed, you know what happened out of that? We ended up networking with hundreds and hundreds of people that gave us the opportunity to grow our network,” Whomptie said. “We would have never met without SDSU.”

The Soundcloud rappers’ melodic verses that build off one another are what drive the spirits of their music. The lyrics relate to a modern day audience as the themes of their music coincide with partying, success and Gucci—the duo is known for wearing intricate, and some would say, boujee outfits.

Some of their biggest Soundcloud hits include the singles “Gucci Snakes” and “Shawty Wanna,” both produced by Nicky Glassez.

The twenty-year-old musicians sat back on the warn down couches on their house patio dressed in casual sweats, unlike their normal fashion seen while performing, and discussed their goals and dreams for the future.

On April 24 the duo will drop their first EP titled “The Pregame” that has been 9 months in the making.

The eight track project is the first of many that the rappers will be releasing independently. Although the sounds of the tracks are trying to be party hits, Colly & Whomptie say it is important to listen to the lyrics that lie behind the beats.

“The title ‘The Pregame’ not only reflects it being the kind of album you play at a party, but it also signifies where we our in the journey,” Colly said. “The project is essentially a pregame for what is to come for us.”

While their career is just at the starting line, the two still have a long road of work to come.

The positive and modest attitudes they induce on one another is what makes their stage presence and their music so enjoyable, and it helps them continue to push boundaries and pursue the unique sound they aim to achieve. Based on the passion they relay about the music industry, it is clear that they will settle for nothing less than achieving their goals in the future.

“It’s all about creating,” Colly said.

“The Pregame” can be found on Soundcloud at the end of the month on Colly & Whomptie’s profile. The duo can also be found on Instagram @Colly&Whomptie and can be contacted at CollyWhomptiemusic@gmail.com.