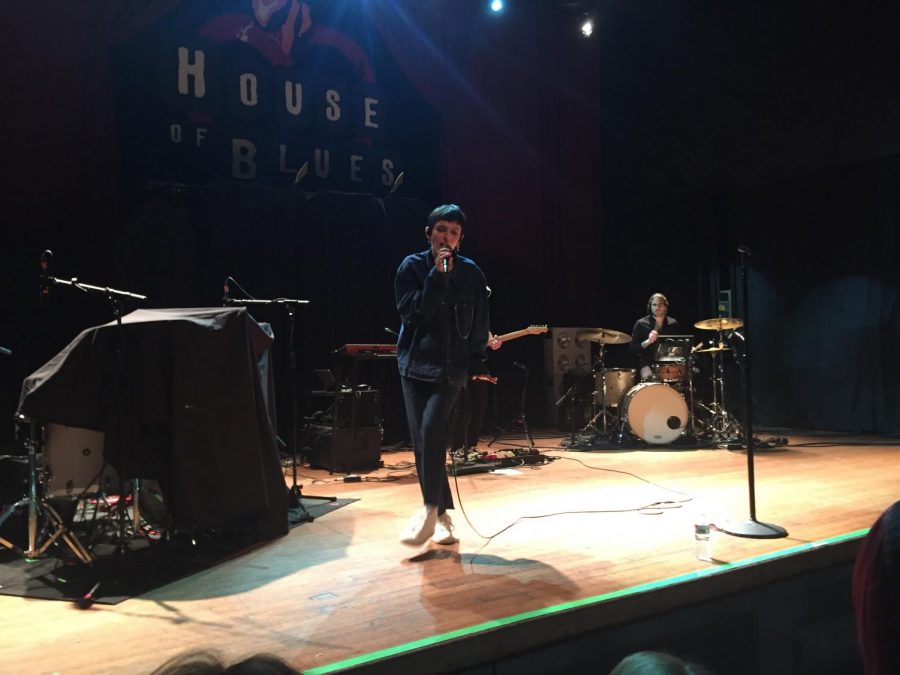 Singer, songwriter Morgan Saint performs at the House of Blues in San Diego as she opens for MISSIO on Thursday, March 29, 2018.

With a voice reminiscent of Lorde, Maggie Rogers and Lana Del Rey paired with a vaguely Karen O sense of style, musician Morgan Saint is touring the West Coast prior to the release of her first full-length album this summer.

As the rare exception in the pop music realm, her debut EP “17 Hero” features lyrics that are just as catchy as they are emotionally-packed. The video for the opening track “You” has more than 130,000 views on YouTube, and the EP’s “Glass House” touts more than 120,000 views.

Hailing from Mattituck in Long Island, New York, Saint was raised in a very musical family and has been playing piano since the second grade. She enjoyed playing instruments, but wasn’t fond of learning music, so she started making her own songs.

“I always tell this story because I was the worst piano student. I’d never practice what I was supposed to, but I loved it,” Saint said. “I loved playing. I’m an Aries, so I really have no patience when it comes to learning things—I want to be good at something immediately. I’d sit down to practice, and I’d be frustrated with reading music, so I’d just end up making my own stuff up on the piano.”

Eventually she taught herself to play the guitar, and started pairing her songs with lyrics. Saint went on to study visual art at The New School’s Parsons School of Design in New York City, and eventually pursued a career in music after her graduation in 2016.

During a show at the House of Blues on March 29, Saint opened for the pop rock duo MISSIO with a high energy performance full of soul and swagger.

“Just Friends” is one of Saint’s favorites to perform because of it’s upbeat energy, which makes it perfect for a dance party or road trip playlist. “Glass House” is another one of her favorite songs on “17 Hero” because it ties the rest of the album together.

“I think what’s special about (‘Glass House’) is that it tells like a really big, overarching story that sort of takes all of the other songs on the EP and shoves them into one song,” she said. “I think it also breathes a new light into the other songs that you maybe wouldn’t feel if you hadn’t heard ‘Glass House’ with them.”

Through both her musical endeavors and visual arts, she is inspired by both the people in her life as well as visual expressions of art.

“What motivates me most is the relationships in my life, and my experiences within those relationships inspire me,” Saint said. “I’m constantly looking at visual artwork to inspire my music, rather than other people’s music, because I feel like that helps me to be inspired without mimicking what someone else is doing and kind of just stay in my own space when it comes to making music.”

Aside from music and visual art, Saint’s personality and individuality also shine through in her choices of vintage clothing and jewelry.

“I love fashion—it’s just an extension of how I like to express myself—and I like unique things that other people don’t have,” she said. “I like hunting for things and finding cool stuff. I don’t like what other people have, so it makes it more convenient to shop vintage, because you know that no one is going to have what you found.”

After signing with Sony’s Epic Records, she said the label executives have been supportive and have allowed her to continue to have creative license over her sound.

“They’ve been really hands-off. I make everything myself, and they’ve just been super supportive,” Saint said. “I just finished my album and I put exactly what songs I wanted on, I chose them, I wrote them myself.”

Joined by her mom for the Southern California portion of her tour, Saint said that having her mother with her on and off while touring has been comforting.

“It can be really lonely on tour — my whole band and crew are guys, so it’s nice to have some feminine energy once in a while,” Saint said.

This summer, Saint will release her first full-length album with Epic Records. It will feature music that is a marriage of her various influences and musical tastes.

“I think my sound is always evolving,” Saint said. “I’m always trying to push myself and make better work than I have released previously. I think you’ll notice some subtle R&B, hip hop-like vibes in the songs to come. I think I just try to stay in my own lane, and whatever I’m enjoying making, it just kind of comes out of me, and whatever that may be is the direction I go in.”