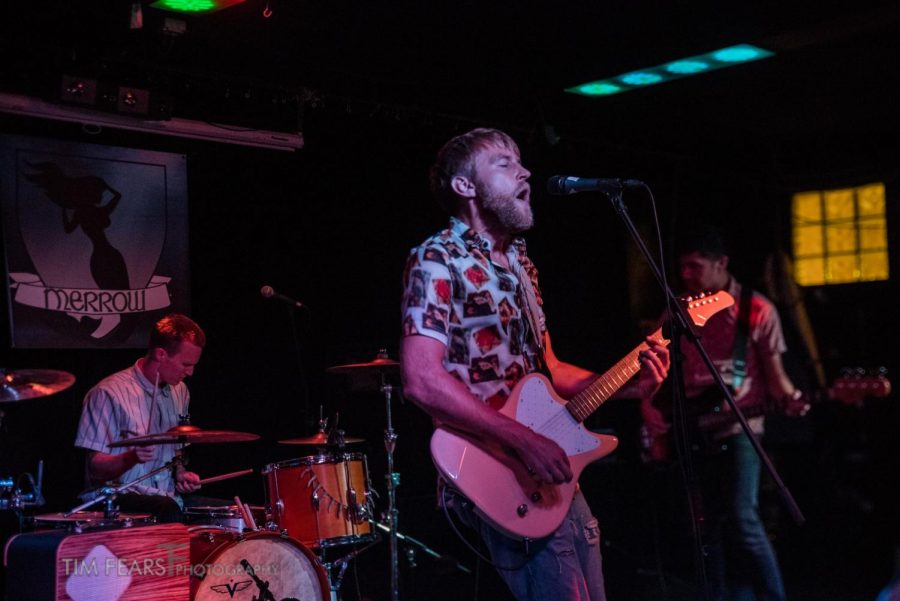 DAYTRIP performs at The Merrow in San Diego September 2017.

San Diego State alumnus Declan Halloran can and has been seen working with various acts around the San Diego music scene, but with his most recent project, under the name DAYTRIP, he just wants to have fun.

Halloran, who graduated in 2016 with a degree in sociology, said an affinity for music is hereditary for him, especially since his father has been working with bands and radio stations since the late 1970s.

“My dad’s been in the music industry for longer than I’ve been alive,” he said. “But even before I was really conscious of what my dad did, I’ve just always wanted to play drums for as long as I can remember.”

“Pumphouse is punk rock related, like ‘70s punk,” the drummer said. “And (DAYTRIP) has influences from Nada Surf to Pixies to Buffalo Tom. It’s more alternative. It’s definitely more poppy in the sense that we write catchier choruses.”

With the emphasis on catchiness, DAYTRIP’s main focus is to make audiences remember it via earworm hooks and melodies.

“We want people to walk away (from our shows) humming the words,” Halloran said. “We’re looking for people to remember the songs rather than showing off how good we are at our instruments. We’ve all been playing our instruments since we were 10, 12 years old but we’re focusing on just writing songs that people would want to remember and listen to.”

This approach to songwriting has so far been successful for the group. SDSU alumnus Ryan Nolen describes the band as energetic, nostalgic and fresh and praised its energy.

“(DAYTRIP has) great tones,” he said. “(It’s) music that’s indicative of good times. All the songs have their own dynamic.”

Halloran said that the band also differs from his past projects in that he’s not in his usual role as the main songwriter. However, he has no problem with someone else filling that position, and still feels he maintains a creative voice in the band.

“What I’ve learned about being in a band is that people carry different weights, but as long as everybody carries their own weight, even if one person is carrying more than other people, then the band can move forward,” he said. “Todd (Anderson) brings most of the songs and then (Loc and I) basically come in, tear it apart, look at it, analyze it and just say, ‘What can we do to make the song sound better?’ Then it morphs into something the band made.”

DAYTRIP released its self-titled debut EP on March 9 via Bandcamp, Spotify and iTunes, and the members’ main focus is now on performing live.

Halloran finds that, even in the age of constantly updated Spotify playlists, the best way to find out about new bands is to see them perform live.

“Instead of looking at music as an accessory, like ‘I’m going to have this song for my playlist and it’s going to be for my studying or for my workout music,’ people who really like bands and actually want to follow a band and grow up with them, will find out when they’re playing live and when there’s new music,” he said. “There’s nothing wrong with discovering bands on Spotify, but the people we’re trying to engage are the people who will want to see us live.”

Concert-goers looking to attend a DAYTRIP show can expect a setlist featuring far more than the band’s four track EP, but to still be encouraged to sing along to the infectious choruses.

“We want people to feel that they don’t just have to watch us, they can dance if they want to, sing along if they can figure out what the words are,” Halloran said. “We keep it exciting because the more we play the songs the better we understand them and the better we can play them.”

DAYTRIP can be found performing at Title TK April 7, the Che Café on April 18 and Merrow on April 24.