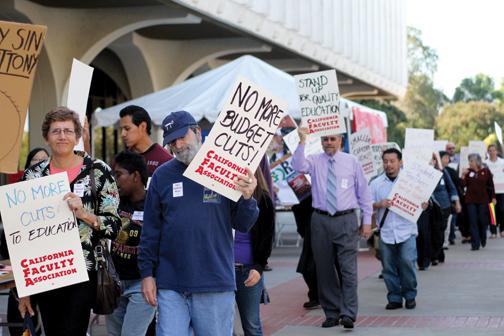 Tthe rally, hosted by the California Faculty Association and Students for Quality Education, was organized to urge Gov. Jerry Brown to increase his budget proposal for the CSU’s 2018-2019 fiscal year.

The rally comes just months after the CSU system’s request for a $282 million budget increase was denied. In January, Brown released his plan for a $92.1 million budget, which is over three times less than the original amount requested by CSU officials.

“All the CSU allies agree that the public university system needs stronger state support than is proposed in the governor’s budget plan if it is to play a key role in California’s future,” the association said in a press release.

In May, the CSU Board of Trustees will vote on whether or not to increase next year’s tuition to help buoy the system’s finances, the press release said.

“The governor is shifting billions of dollars into the state’s ‘rainy day fund’ but for those of us in the CSU, especially our students, it is raining right now,” Eagan said.

“If the state continues their disinvestment in the CSU, they’re just perpetuating harm on our students and hampering what’s going on in the classroom,” Fritz said.

CSU Sacramento sociology professor Kevin Wehr said the rally was also a space for students and leaders to address other issues facing the CSU system besides budget.

“The event is about funding the CSU, but it’s also about freeing students from high tuition, discrimination, racism and hatred,” Wehr said.

Some of the key speakers at the protest were CSU Chancellor Timothy White, Board of Trustees Chair Rebecca Eisen and CA Senate President Pro Tempore Toni Atkins.

Wehr said students and speakers also wanted to honor Dr. Martin Luther King Jr. on the 50th anniversary of his death by discussing the importance of equal opportunity in schools and the value of public higher education.

One highlight of the event was the augmented reality gallery created by local Sacramento art group Sol Collective.

Fritz said the installation included large mounted electronic banners featuring the faces of various human rights leaders. With the help of the free HP reveal app, people could point their phones at the banner and watch the image come to life on their screens. Each image was transformed into a one-minute video of the person speaking about education and the significance of activism.

“There’s nothing like it that’s been done before at the capitol, so we we’re pretty excited about it because it’s really powerful and inspiring,” Fritz said.