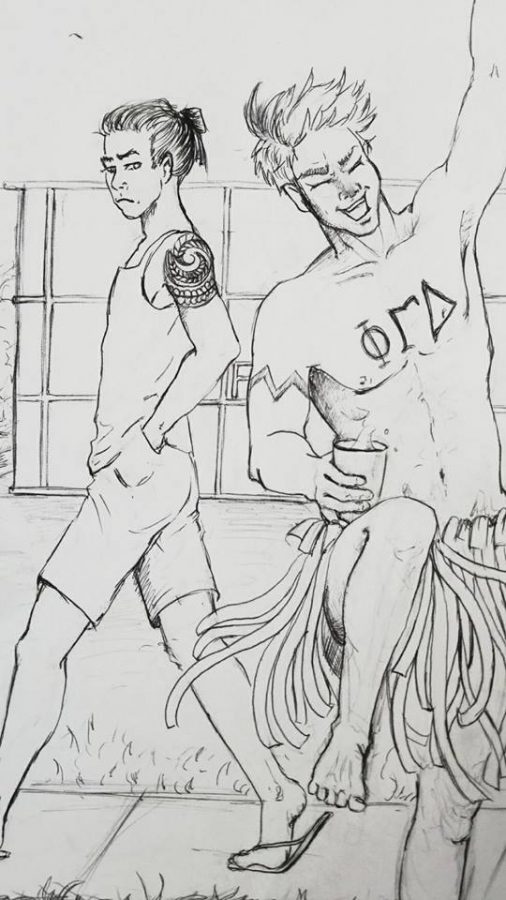 The San Diego State chapter of the Phi Gamma Delta fraternity recently held a series of events part of its annual “Islander Week.”

While members of the fraternity might have had good intentions, appropriating island culture as part of a gimmick to attract donations is insulting to the Pacific Islander community.

Members of fraternities often defend their participation in Greek life by emphasizing their focus on philanthropy. As a woman of Samoan descent and an active member of the Pacific Islander community, I can appreciate this. No other people is as giving, uplifting or welcoming as Pacific Islanders.

However, using island culture as a branding mechanism and a ploy to promote fundraising opportunities is wrong. Too many people are ignorant of Pacific Islander culture and the struggles that the community continues to face.

Phi Gamma Delta is predominantly made up of white men and people of color of non-Pacific Islander descent. People from the Pacific islands include those from the indigenous areas of Melanesia, Micronesia and Polynesia. The frat’s nickname is misleading to those unfamiliar with Greek life. From an outsider’s perspective, people might think that Fiji would be referring to the South Pacific nation, where the indigenous people there have a rich cultural heritage.

“When I first walked on campus and saw the letters F-I-J-I on the fraternity’s house, I immediately thought ‘oh cool, a Fijian club.’ I thought it was an organization focused on Pacific island culture,” said Leiana Lepule, who is of Samoan descent and a freshman majoring in liberal studies. “Now that I know the majority of the members – or none of them –are Pacific Islander, it’s honestly kind of weird. People shouldn’t be calling themselves ‘islanders’ if that’s not their cultural background.”

It’s ironic that the fraternity calls itself Fiji when it was founded in 1848 by non-Pacific Islander men at Jefferson College in Pennsylvania. It’s unlikely there were any Pacific Islanders anywhere near institutions of higher learning at this time — they were busy dealing with colonizers.

If the frat insists on keeping the Fiji moniker, why not team up and support SDSU’s Pacific Islander Student Association? Only 18 percent of Pacific Islander-Americans hold a bachelor’s degree, according to the U.S. Census Bureau. Pacific Islanders at SDSU make up just 0.3 percent of the student population. Pacific Islanders are a marginalized community and we need all the help we can get. What we don’t need is ignorant frat boys perpetuating stereotypes of our culture.

The organization’s national website says that “when our fraternity is named in campus or interfraternity publications, we prefer the full spelling of Phi Gamma Delta rather than use of the Greek letters or the nickname ‘Fiji.’”

The website also notes “Phi Gam” as a common nickname for the fraternity. That sounds much more appropriate than using an island nation’s name.

If the fraternity does not want to be called Fiji in publications, why should its members continue to brand themselves as islanders on social media and in advertisements?

SDSU is a university that prides itself on diversity and cultural understanding. If this fraternity is a part of our community, it needs to be more culturally sensitive and get rid of its nickname.

“As someone who is of Pacific Islander descent, it disappoints me that there are people who continue to appropriate and disrespect the culture without realizing how it would negatively impact members of the community,” he said. “I respect them for raising awareness towards a humble cause, but am disappointed that it was done at the expense and inconsideration of someone else’s culture.”

On its social media, Phi Gamma Delta prides itself on being the first frat to hold “a week-long philanthropy event since 2012.” However, its good deeds are overshadowed by a lack of cultural understanding.

This past year, I was awarded the title of Miss Pacific Islander of San Diego. As an ambassador for my community with access to a platform like The Daily Aztec, I am obligated to stand up for those who have been traditionally silenced.

Phi Gamma Delta’s persistence in using Fiji as a nickname for its organization is hurtful to Pacific Islanders and it needs to be eliminated from campus. Our community continues to face discrimination in higher learning. On behalf of SDSU’s Pacific Islander Student Association, I urge Associated Students and administration to pressure the chapter to drop the moniker.