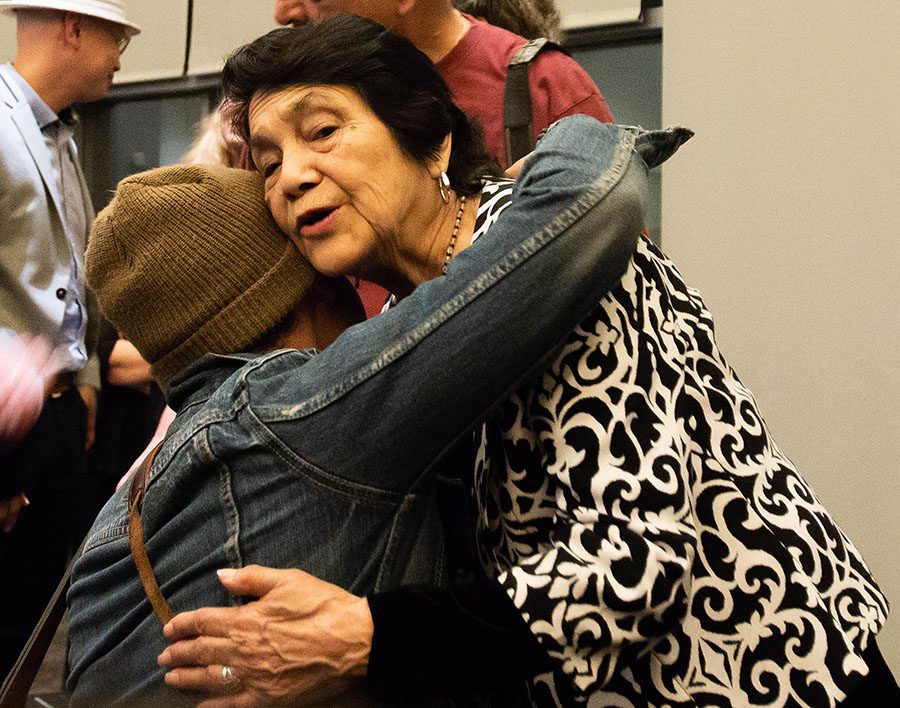 Civil rights activist Dolores Huerta encouraged the next generation of activists to continue striving for change during a panel in San Diego.

The now-88-year-old activist — she celebrated a birthday a few days after the panel — spoke about her experiences as an advocate and addressed the social and economic issues facing Americans today, encouraging the crowd to remain active in their communities and advocating for their own needs.

She continued on explaining that it’s not enough to simply march and hold demonstrations, saying that people have to vote if they want to see change.

“We cannot have a democracy if people do not engage,” said Huerta during her talk.

While she’s remained an activist throughout most of her life, Huerta is most notable for her collaboration with in Cesar Chavez in the 1960s when they establish The United Farm Workers of America which championed farm workers’ rights.

Huerta also advocated for a number of laws that benefited the Latino community, including a 1962 bill allowing Californians to take the California Driver’s examination in Spanish and the 1962 legislation repealing the Bracero Program.

In 2002 Huerta created her own foundation named the Dolores Huerta Foundation, that self-describes as focusing on creating leadership opportunities for community organizing, leadership development, civic engagement.

Ten years later, she was awarded the Presidential Medal of Freedom for her work in activism by then President Barack Obama.

But despite her extensive work and involvement in various civil rights movements, not many Americans are familiar with Huerta’s story, including some in the Latino community.

“I grew up knowing about Cesar Chavez but Dolores Huerta, I actually didn’t really know who she was until college,” San Diego State alumna Melanie Mijares, who was at the event, said.

SDSU alumnus Carlos Salinas also said he recently learned about Huerta, but said that she’s inspired him to become more involved in his community.

“Even though we are individual, small communities, we can come together and actually effect some change,”

Mijares agreed, saying she stays involved as an activist in her own community.

“I think it’s my duty as a citizen to continue educating myself and continue being a part of these conversations,” Mijares said.

While Dolores spoke on her past work as an activism, she also gave advice to the new generation of activists.

“This is not a short game, this is a long game,” Huerta said. “We have to hang in there, because ultimately we will win if we don’t give up.”

A new documentary about Dolores Huerta and her activism titled “Dolores,” premiered on March 27 on PBS, and is able to watch online until April 24.