Take Back the Night brings awareness to campus 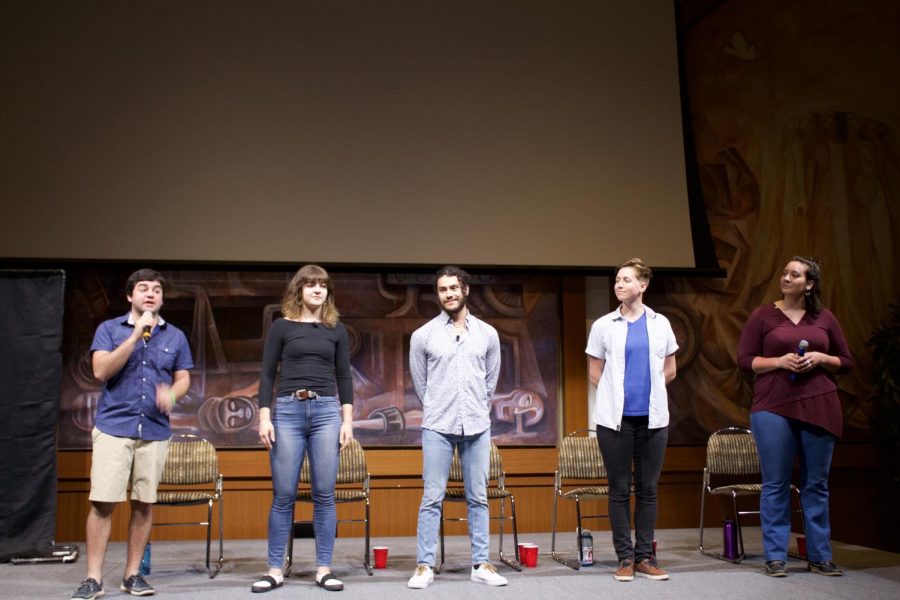 David Picariello, Francesca Morabito, Mario Roberge-Reyes, Megan Mackenzie and Alana Cooper speak at the Speak About It event on April 10 in Montezuma Hall.

Sexual violence and assault awareness has had an increase in visibility due to movements like #MeToo. These movements tie into San Diego State’s fourth annual Take Back the Week event taking place April 9-13.

There will be events centered around sexual violence held every day on campus during the week.

As shown by surveys detailing how students have been victims to sexual assault, college campuses are an easily targeted population. In a survey for the San Diego State campus, it was found that around 20 percent of students have encountered sexual assault.

“We want to raise awareness about sexual assault,” Women’s Resource Center coordinator Jessica Nare said. “We also want to destigmatize this issue and make it a more open issue to talk about.”

Originally the idea for this week came from the one Take Back the Night solo event. However, SDSU student organizations decided to stretch the idea, and one of the main organizations to first get involved was the Women’s Outreach Association on campus.

The month of April is already nationally recognized as Sexual Assault Awareness Month, and students on campus wanted to do more.

“We started Take Back the Week because we wanted more things for people to go to and get educated about sexual violence,” graduate student Queena Tran said. “The events are also giving survivors support and bring awareness to the issue of sexual violence.”

Queena Tran is one of the students to first start Take Back the Week. She was involved in student organizations as an undergraduate and wanted to do more than the one night of awareness. Her organization and others built off the idea of that night and expanded it into a week.

There are 14 events in total throughout the week with at least two events per day.

The events are a broad range of activities that include trauma yoga, conversations between students about gender issues and the anti-violence movement, support groups for victims and a march on campus.

Most of the events will emphasize different aspects of sexual violence. People who participate in the events will be exposed to this current issue and the way it is related to other forms of suppression and violence.

“I’m looking forward to the Men as Allies event because it shows solidarity between men and women and that we, as men, recognize that there are problems including sexual violence and the glass ceiling, to name a few,” political science junior Dom Glenn said.

Glenn is also a member of the Delta Sigma Phi fraternity that is volunteering at the event.

Last year there was an estimated 1,500 students who attended the events, and volunteers are expecting a similar turnout this year.

“I’m expecting it to be a really powerful week with meaningful dialogue,” Nare said. “Students will leave with ideas of where they can be involved in next and how to be involved in putting an end to sexual violence.”

This is the fourth time this event has happened on SDSU’s campus, but Take Back the Night can be traced back to as early as the 1970s and ‘80s.

Some of the groups that will be volunteering throughout the week are academic departments, student organizations, Greek communities and the Sexual Violence Task Force.

Delta Sigma Phi is one of the fraternities that is volunteering for the event and they will be making in-class presentations to promote the events.

“We strongly encourage men to be a part of this, especially in the Greek community, and to come to these events to see what the speakers have to say and to understand the magnitude of these issues,” Glenn said.

Students can find out more information about Take Back the Week on the Women’s Resource Center’s website.