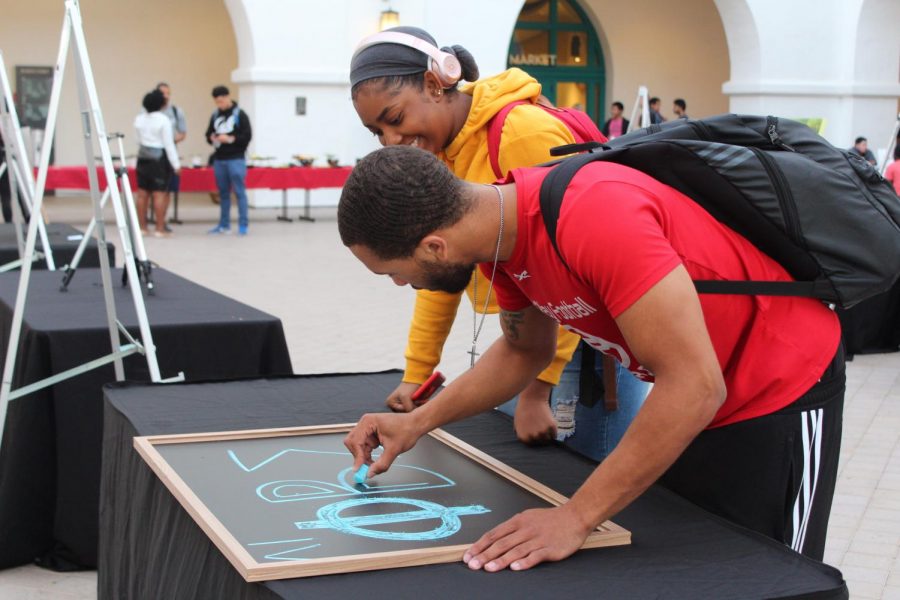 Students at the Aztec Art Contest admire the work.

Associated Students took advantage of the later light hours to put on a night of food, music and various forms of visual art. The Live Art contest was held in the Conrad Prebys Aztec Student Union on Wednesday April 11 during the early evening.

“I think it’s really awesome, the music is great, the food (is) good and everything is very artistic” marketing senior Linda Dawood said.

While passer-byers perused the pieces of art, they munched on cheese, vegetables and cookies. The booming sounds of French Montana, Lil Pump and Cardi B fueled the atmosphere. Some students looked at the works of art while others created small dance parties. People using the Aztec Student Union as a place to study were given what seemed to be a welcomed distraction.

“This is a chance for students to showcase different types of art of any mediums,” political science sophomore Tiana Loving said. “We have just a couple of paintings up right now.”

The three pieces of artwork were given titles of one, two or three. Students voted for the number they thought best represented the night’s theme of “SDSU Culture.”

The paintings were all very different. Number one showed a bloodied hand holding a fresh heart, but the heart was also a face with many eyes all over it. Number two showed two star-filled silhouettes of a couple kissing almost being melted together. Number three depicted a human eye with the image of Hepner Hall in the iris.

While number one ended up with the most votes students had a few things to say about the other paintings.

“It’s passionate, like they can’t be a part because there is this glue on their faces,” marketing senior Sophia Jedrysik said while speaking of painting two. “It makes me feel good though, like there’s a lot of love like that in the world.”

Daywood spoke about painting number three and how it represented what new students who have the goal of coming to SDSU must be thinking. She also said that it probably represents the current vision students have of cherished times at the school, much like herself.

The A.S. Culture Arts and Film Committee plan on having this type of art showcase and contest next year as well.

“We want more students to come out and submit their art next year,” management information systems junior Grayson Saulnier said. “We only had a few come out this year but we hope for better turn out next year.”

A.S. has a calendar of all upcoming events and other information on their homepage.