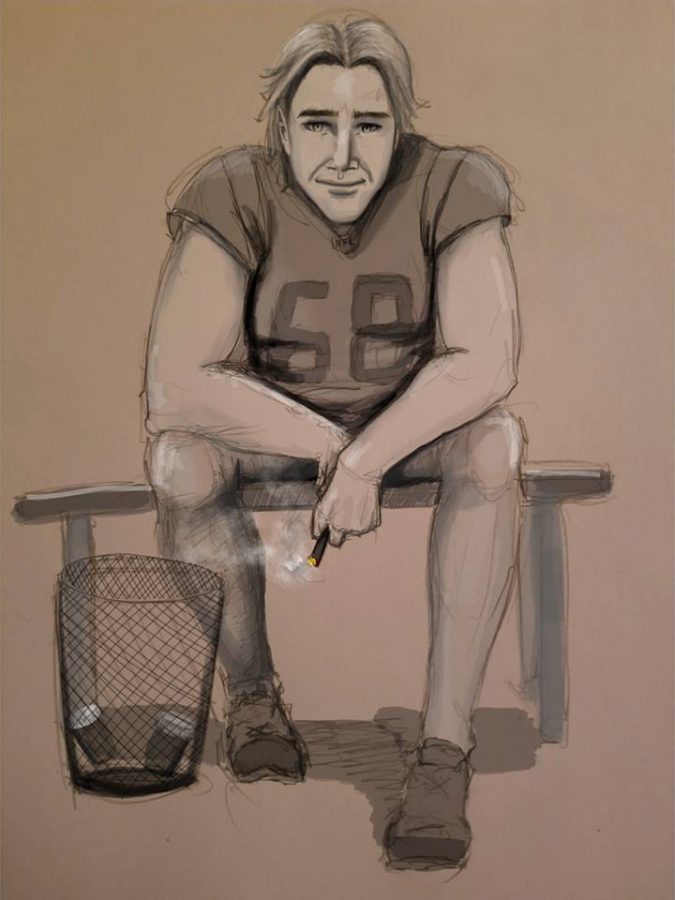 Kyle Turley is a retired NFL football player who played for San Diego State during the 1993-97 seasons, and was inducted into the Aztec Hall of Fame back in 2010.

The seventh overall pick in the 1998 NFL draft, Turley played for three different teams in nine years, before retiring due to health issues in 2007.

Turley now suffers from the effects of chronic traumatic encephalopathy, as well as a seizure disorder and early onset Alzheimer’s disease, which he was diagnosed with in 2015.

Working with a variety of organizations, Turley is a staunch advocate for cannabis use as a way to alleviate pain and cognitive issues that come from playing contact sports like football.

In 2015, Turley founded the Gridiron Cannabis Coalition, a group of former pro athletes who attend conferences to discuss the positive effects of cannabis.

The Daily Aztec spoke to Turley over the phone on April 7, when he discussed a variety of topics ranging from his time at SDSU, his health, his time in the NFL and after, his past addiction to painkillers, his use of cannabis and how he hopes to continue championing for a world where cannabis use is an accepted form of medicine for athletes and all individuals.

“I had a pretty unique experience with cannabis. I went to San Diego State… came out of Moreno Valley, was around it constantly, high school into college, I mean San Diego State, come-on. I refrained. I was committed to playing football, honoring my scholarship, trying to make it to the NFL, that was the dream.”

“I didn’t use marijuana at all until my second year in the National Football League when a player saw that I was really struggling with some on field pressures… as well as some off field issues that everybody can end up having along the way.”

“What it was introduced to me as was something that could help my mind. I wasn’t sleeping, I wasn’t eating, I was being prescribed all these medications from the team doctors, I didn’t want to sacrifice getting kicked out of the NFL.”

“I’d done all that had work and stayed away from spring breaks and everything else going to San Diego State for five years, that’s a pretty hard feat. I didn’t want to give all that dedication up because of weed. That wasn’t going to be me.”

“It was explained the marijuana policy of the NFL, which was a once a year test, which I didn’t understand because the NCAA is random marijuana testing and the NFL’s a one-time-a-year test. So once you take it at the beginning of the year you can freely use any street drug without risk of testing positive.”

“I was pretty desperate at the time for some relief, going through (the transition to the NFL) was quite difficult, and being able to manage that stress and leave the onfield persona and the demand to be a violent individual. It was very difficult for me to leave at the job… so it was offered to me as a solution. A player saw me in struggle and was like ‘KT you’re not sleeping right, you’re not eating right, you’re suffering at work here, we can all tell something is going on. You need to smoke this weed.’”

“It’s very cliche, but that seems to be how God chose to speak it to me in the beginning, and it was undeniable the relief that I received, and subsequently went on to All-Pro seasons after that and was able to manage on the field and off the field issues using that periodically, but not enough. So there still was issues, but cannabis was always there for me… it was very apparent that this was helping me and would heal my brain and help me to deal with things that I could not deal with on a sober mind.”

“I never used (weed) for painkilling, I bought into the painkillers. I was unfortunately sucked into that because it was so freely given to us.”

“I wasn’t taking twenty Vicodin a day like some of my friends got up to and were able to do. Literally eating Vicodin like candies. I didn’t have that tolerance to those drugs because those got you really high, and I guess probably because I wasn’t a drinker I didn’t understand or like that real f—– up level. And I still to this day I don’t use cannabis to get high, I use it to address ailments. I just smoked a joint before talking to you. It allows me to articulate, to stay focused, and not be high.”

BAD CONCUSSION IN THE NFL

“I had (a concussion) in 2003 where I was hospitalized, It was a bad one. I was knocked unconscious. I had to get woken up off the field with the ammonia caps, the whole deal. I lost the rest of that day to my memory, I don’t remember much at all, just splashes.”

“(Going to the hospital following the concussion) was the first time that I was informed by other doctors that weren’t NFL doctors that something was wrong on this brain scan. And they were quite concerned. I stayed the night and then the next day the Rams doctors… took over, I never saw those doctors again from that hospital that were concerned about me. I was back in the care of the Rams and was back on the field that week practicing through migraine headaches and just felt horrible. Didn’t feel like myself at all, kept telling them that, but I went out to practice and I could show them that I wasn’t going to pass out again and that’s all they really cared about at that time.”

WALKING AWAY FROM THE NFL

“I walked away for many reasons, and one of them (was) I couldn’t even hit myself in the face anymore before I went out to the field, or get smacked in the head by anybody. You know how you get fired up playing football you do stupid things like that, but we didn’t know any better. I was making myself almost go into full vertigo just doing that. So it was a fine line to walk, I knew there was some serious cognitive issues that were starting to feel alive, but I didn’t understand the seriousness until that.”

MENTAL ILLNESS AFTER THE NFL

“We understand the disease (CTE) now where it affects us and what we’ve done to our brains as football players. That frontal lobe deals with decision making and emotions and all of these other things you need to be able to control to function in society, and I wasn’t able to control that. I couldn’t go to McDonalds with my kids anymore. I couldn’t be in public with people. Everything bothered me. All of these symptoms that were now what we understand as precursors to Alzheimer’s dementia were starting to surface, and it wasn’t until I found the right strains of cannabis to deal with this that those things stopped. And I don’t have to deal with them anymore.”

“I have been prescribed all these medications, on top of the painkillers then, because I was having these neurological issues keep surfacing, passing out, having seizures and all that.  They sent me to these neuropsychologists, neurologists and all these people started prescribing me more drugs… the only thing that saved me from any of that shit was marijuana.”

“I wish I could have my body of 10 years ago right now, because now I have this mental stability and I have this power to tap into me again. I guess that’s the one thing I can say is that it has brought me back to being me, and I believe that that speaks to the science of the cannabinoid system.”

“There are studies immediately that are ready to come out that prove marijuana can stop the progression of Alzheimer’s and potentially reverse it. We’ve seen what it does for the seizure kids, we understand how its addressing the opiate addiction with soldiers and football players and all these other athletes that are out there dealing with pain and injury and the aftermath of traumatic brain injury, etc. (They) are benefiting from this, let alone the myriad of other ailments that are being cured.”

“(Athletic doctors) should be  in Washington, D.C., lobbying for marijuana reform and the descheduling of cannabis, to get government money to study it, and to first and foremost give their athletes a proper opportunity to recover from injury through the scientifically proven system that we have inside of us that deals with our immune system and our central nervous system like I’ve never experienced.”

“I realized that if I put more guys around this it’s not just going to be Kyle Turley up there again hollering about something new to get attention… it was this message of that this plant saved my life, and I can’t deny it, I can’t argue against it whatsoever. It is fact. I’ve stolen the last three years of this life that I’ve lived because of this plant, because what I’ve found in it.”

“Honestly it was just a vision I had, to say look if I rallied more people around this it’s going to turn into something bigger, and it’s going to open conversation up, and that’s what it did.”