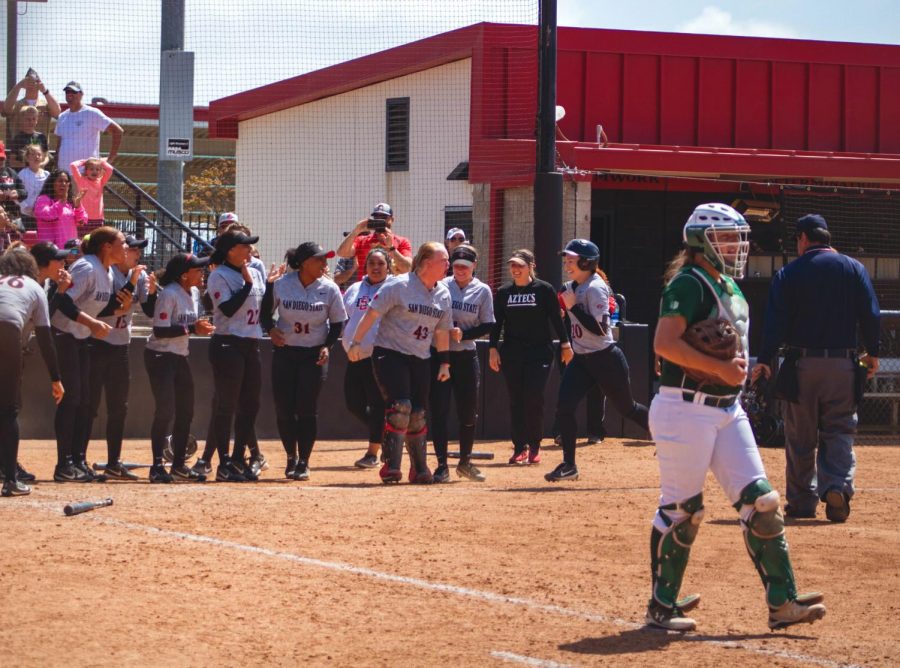 Sophomore shortstop Shelby Thompson runs towards her teammates at home plate after hitting a walk-off home run during the Aztecs 3-2 victory over Colorado State on April 29 at SDSU Softball Stadium.

San Diego State softball battled its way to a 3-2 victory in a 10-inning game over Colorado State University on April 29 at SDSU Softball Stadium.

“I was trying to get it for my team,” Thompson said. “I know they were all getting tired and we really wanted to win this game. I just wanted to come through for my team.”

Senior pitcher Alex Formby also had much to do with the team’s overall victory, and she came up clutch in the most intense, crucial moments of the game. With runners in scoring position and several full counts, Formby found ways to survive the innings.

Formby said it feels to good to walk into the dugout after getting through an intense inning.

“It feels really, really good,” Formby said. “Especially knowing that your teammates deserve it. You can’t let the emotions get to you because there’s a lot of yelling, a lot of stuff going on mid-inning, you have to stay focused. So, after the inning it gives you a chance to feel the emotion of it and now I can be really excited.”

Senior first baseman Taylor Stewart was also a huge asset to the team’s victory. With a runner on third, Stewart hit a single RBI to tie the game up 2-2 in the bottom of the sixth.

“It’s great, honestly,” Stewart said. “When you’re going up there, it’s kind of like the pressure is on. You always want to be that person, you always want to be in that position. So when you come through it’s amazing, it’s just a really great feeling.”

The win led to the Aztecs first home series win of the season.

“It’s really nice,” Stewart said. “We have amazing fans that always have our back. It’s nice winning at home because it’s our house.”

Head coach Kathy Van Wyk said all games are important, but it is nice to finally win at home.

“We get these great crowds, it’s nice to come out here and perform,” she said. “These girls work their tail ends off so it’s important to give them something to show for.”

Despite a rocky season which has led to a overall record of 16-29, the Aztecs have managed to keep their heads up and continue to fight.

“It shows people that we have a lot of heart, even though the year has been really hard,” Formby said. “I think that honestly shows more about or character than anything else and that’s what is important. When you’re losing, it’s really easy to get down and be like ‘what are we playing for anymore?’, but now you can just tell that we’re playing because we love the sport and we have a lot of heart, we have nothing to lose anymore.”

Only two series remain in the season, and Formby said she wants to give it her all for what is left.

“I’m going to give it everything I have,” she said. “On the last game I want to look back and be able to say that I didn’t have any regrets.”

Formby said the entire team will continue to battle for what is left of the season.

“When the going gets hard, we do have a lot of heart and we can fight back,” Formby said. “We’re not going to give up, we’re just going to keep fighting.”

SDSU travels to New Mexico May 4-6 to go head to head with the Lobos, and will play their final series at home May 10-12 against Utah State University.