The Daily Aztec • May 24, 2018 • https://thedailyaztec.com/89908/sports/baseball-defeats-san-jose-state-2-1-in-opening-round-of-mw-championship-tournament/ 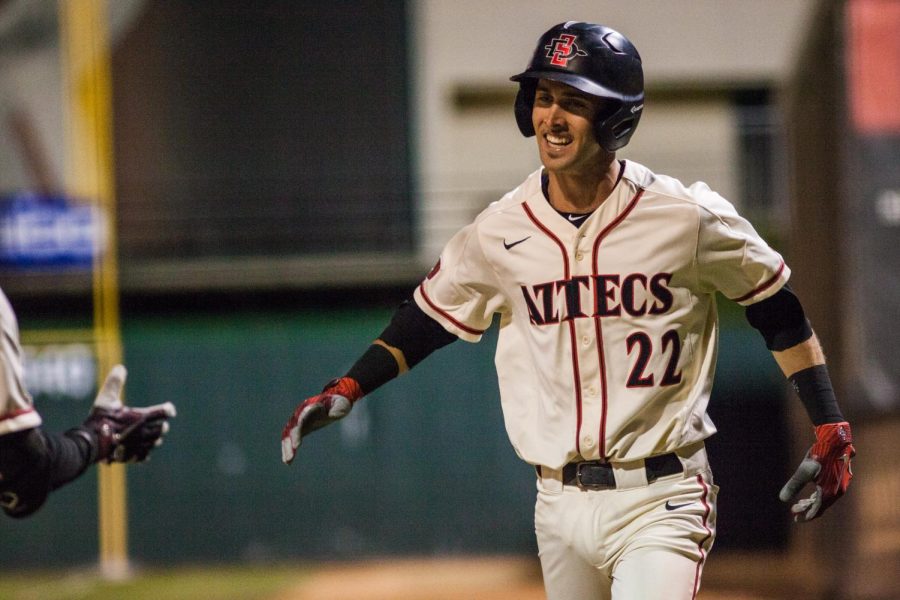 Senior infielder David Hensley celebrates after hitting a sacrifice fly during the Aztecs two-run seventh inning in a 2-1 victory over San Jose State on May 24 at Tony Gwynn Stadium.

San Diego State baseball escaped with a 2-1 victory over No. 3-seed San Jose State in the opening round of the Mountain West Baseball Championship double-elimination tournament at Tony Gwynn Stadium on Thursday night.

“It was great baseball, it was hard for me to watch, but we’re very fortunate to get out of here with a win,” head coach Mark Martinez said.

No. 2-seed SDSU now moves on to play No. 4-seed UNLV tomorrow in the winner’s bracket, and Martinez said that the win puts the Aztecs in a fortuitous spot moving forward.

“I think you have to win the opening round,” he said. “It kind of gets yourself in a position to have the opportunity to get into Saturday and the championship round.”

SDSU trailed 1-0 late, but was able to break through on offense with a two-run seventh inning which included three hits and a game-winning RBI by senior outfielder Chase Calabuig.

“It was an all around effort, pitching was amazing, set us up in that position,” Calabuig said. “There was a lot of ways that game could have gone wrong, and they held us in there tight, but in the seventh inning there (we) just battled.”

Hill and Mitchell were named Co-Mountain West Pitcher’s of the Year following the end of the regular season.

Senior pitcher Jacob Erickson came on in relief of Hill in the seventh inning, and pitched the rest of the way without giving up a hit to earn the victory.

“(Erickson’s) huge. He bailed me out of that last inning that I went in and then just went the rest of the way just like hes done all year,” Hill said. “He’s been awesome for us. “

Mitchel struck out nine in the game, but was charged with two runs after junior Fineas Del Bonta-Smith was unable to get out of the seventh inning jam.

Mitchel had just escaped a bases-loaded jam an inning earlier after SDSU sophomore outfielder Julian Escobedo struck out to end the threat, but Martinez said he was not surprised the Spartans stuck with their starter as long as they did.

“That’s their guy so it didn’t surprise me,” Martinez said. “They are going to find a way to get him out of there and just give up one run, or try to throw a zero up there.”

The Spartans scored their lone run on a two-out double in the top of the fourth inning from senior third baseman David Campbell, which scored senior first baseman Shane Timmons.

The Aztecs have now won 12 of their last 14 games against SJSU.