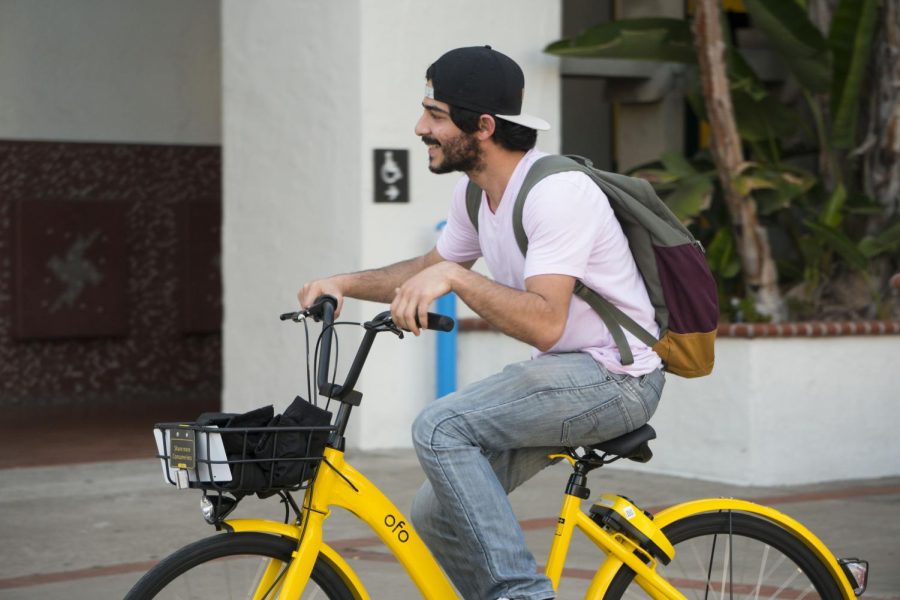 Just a few months after dockless bikes and scooters were swiftly introduced to the San Diego area, the San Diego Police Department has been issuing citations for unsafe and illegal activities such as multiple people on one scooter and riders not wearing helmets.

Herriott added that local legislation restricts cyclists from riding on sidewalks in front of commercial businesses and that “electric scooters may only be ridden on a street that has a speed limit of 25 mph, or less.”

Companies such as the electric scooter-sharing company Bird have worked to make these kinds of citations more avoidable. On the Bird app, riders can obtain one free helmet after signing up for an account.

While these rules have presented issues throughout other areas of San Diego, Herriott said they have yet to affect SDSU.

“The University Police Department has not issued any citations or arrested persons relating to the described incidents,” Herriott said in an email response.

Dockless transportation was introduced to the SDSU community with the bike-sharing company Ofo. Last April, Ofo began an exclusive contract with SDSU to place dockless bikes on campus.

Tom Abram, assistant director of sustainability at SDSU said 200 bikes were placed on campus at the start of the program. During the first month of the program, he said there were 4,653 active users who logged a total of 37,542 rides.

“There has been a lot of excitement and interest from students around the Ofo bikes,” Abram said in an email response. “When school was in session, our ridership numbers were excellent.”

However, Abram said there has been a problem ensuring Ofo users leave bikes on bike racks.

“There has been support from faculty and staff, but also some concerns – primarily around Ofos that are not placed at bike racks,” Abram added. “We are working with Ofo to develop a system to encourage users to park in approved locations while on campus.”

The program is still being perfected, but the students seem happy. Following the introduction of Ofo bikes on campus in April, some students have credited the program with transforming their campus transportation experience.

Following the introduction of Ofo on campus, aerospace engineering senior Karl Parks said he began riding the bikes every day to cut down the time it took to get between classes.

“I rode it from one of my classes at Peterson Gym all the way to the engineering department frequently, and that’s normally a 10 to 12 minute walk that I can now do in two minutes,” Parks said.

Parks said that the $8 per month unlimited plan for students makes using the bikes regularly affordable for students on a budget.

As somebody who had previously rode their personal bike around campus, Parks said another benefit of the bike sharing program is not having to worry about having a bike stolen or forgetting it on campus.

While many frequent riders may opt for the $8 monthly fee for unlimited bike usage, the Ofo app indicates that rides usually run at $1 per hour, with possible discounts for students.