Red and Black Shuttle expands off campus, to be accompanied by new transportation options 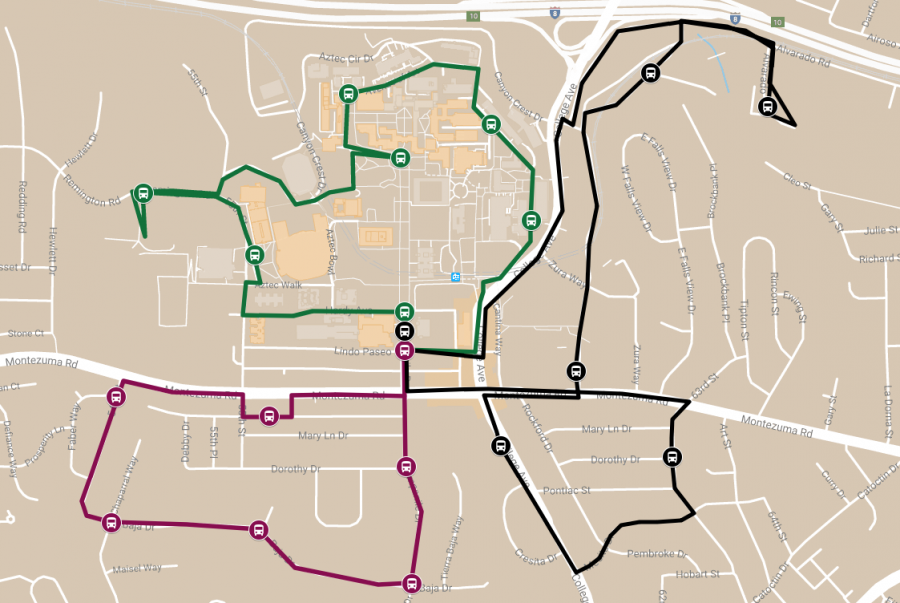 The Red and Black Shuttle will now service riders on three lines, some of which have off-campus stops.

Big changes are in store for San Diego State’s Red and Black Shuttle service, in an effort to attract more student riders.

The shuttle, a service that has long offered students a transportation option between different locations on campus, is expanding in size and absorbing the safety escort program and library shuttle.

“There are going to be 18 (shuttle stops) instead of the 12 we had before,” Parking and Transportation Services Director Debbie Richeson said. “Five of those locations are going to be off-campus.”

Despite the increase in shuttle stops, Richeson said students can expect these changes to make the shuttle more efficient. The shuttle used to serve 12 stops on one route, but will now serve 18 stops on three routes. These routes will be served by five shuttles from 5:30 p.m. to midnight, Monday through Friday.

“There will be three routes: the green line, the red line and the black line,” Richeson said. “They will all intersect at Speech, Language and Hearing Sciences.”

Speech, Language and Hearing Sciences can be found on the southern end of campus, just north of the intersection of Campanile Drive and Montezuma Road across from the KPBS building.

Richeson said students will be able to see where the shuttle is at all times through a phone application.

These updates to the shuttle program will be accompanied by efforts to make the campus a safer place to be in the late hours of the night. With the exception of parking structure 14, Richeson said students will be allowed to park in faculty-designated parking spots between 6:30 p.m. and 1 a.m.

For those who may study late in the library, Richeson said parking structure 6 will be the safest location to park.

“Because we are allowing students to park in faculty parking after 6:30 p.m., we’re going to designate (parking structure 6) as the library parking lot for people who are staying late because we have such good lighting between the areas,” Richeson said. “It is a designated path of travel that our police will know about.”

For those who don’t drive to campus, university police spokesperson Raquel Herriott said SDSUPD is working to develop a program with Lyft.

“What we are trying  to do is work with Lyft so that we can provide SDSU community members with a subsidized rate so that they can utilize that service so they can get around,” Herriott said.

She said the program would allow SDSU students, faculty and staff three rides from Lyft at a reduced rate.

While Herriot said the program is currently still in the works, she said she estimates the cost will be $5 less than the standard cost of a ride.

The Lyft program will be offered Sundays through Thursdays from midnight to 4 a.m. to assist those who need transit during hours not served by the Red and Black Shuttle.

The push for change within campus transportation comes following many years of underutilization. Throughout the year of 2017, a University police report shows that the library shuttle hosted 3,018 rides, the Red and Black Shuttle had 1,148 rides and community service officers conducted 1,225 safety escorts.

One of the issues that Herriott said needed to be addressed was the excessive stress on university police staff. She noted that many students had complained of long waits for safety escorts.

“The problem that we were having with the escort program was that people wanted an escort off campus and we were only allowing for escorts within campus and within certain jurisdictions,” Herriott said. “It became a little bit more difficult to take on all of the different requests, especially with the amount of resources that we had.”

She said the main issue was related to the fact that, once the student community service officers were off-duty, police officers were forced to take on safety escorts on top of their usual calls.

The answer, Herriott said, was to empower SDSU students, faculty and staff by providing a number of safe transportation options.

“The last hour of instruction is 10 p.m. so we wanted to ensure that, if you have a late class, you have this resource available.” Herriott said.