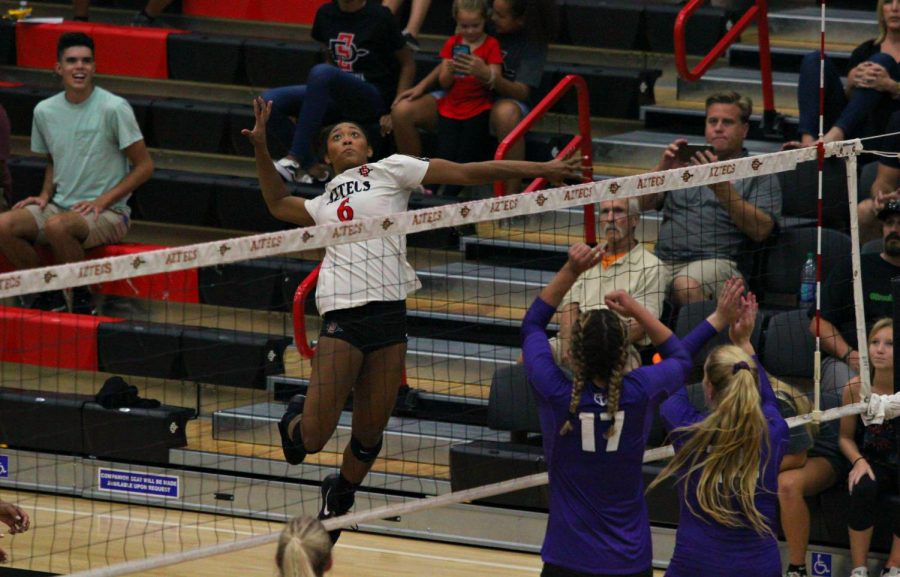 Junior outside hitter Ashlynn Dunbar goes up to strike the ball during the Aztecs 3-1 loss to Portland at Peterson Gym on Aug. 25.

San Diego State women’s volleyball finished off the Aztec Invitational with a four-set loss to the University of Portland on Saturday night at Peterson Gym.

Junior outside hitter Ashlynn Dunbar led the Aztecs with a career-high 22 kills, but the team could not overcome falling behind two sets to a Portland team which won all three of its games during the invitational.

“Tonight was tough. It was a tough loss because this whole weekend we were pushing and we were improving and it’s hard,” Dunbar said.

The Aztecs were finally able to break through in the third set, handing Portland (3-0) its first set loss of the season.

SDSU got out to a fast 3-1 lead in the fourth set, but fell behind after three errors, and a service ace by Pilots redshirt junior middle blocker Katie Barker.

A kill by Dunbar got the Aztecs within 18-17, before three straight points by the Pilots put SDSU in a hole it could not climb out of.

Head coach Deitre Collins-Parker said the Aztecs are still learning as they begin a new season, and praised Portland as a tough opponent for her team to play so early on.

“We’re still growing and developing,” Collins-Parker said. “It was a great team for us to play. They have such a fast offense and they’re very good at what they do.”

SDSU went to five sets against both Bakersfield and Seattle, which Collins-Parker said made a comeback against the Pilots an even tougher task.

“I feel like we ran out of gas in game four and that’s disappointing, but part of that is we’re still developing our bench so that we can give people rest,” Collins-Parker said. “It’s hard to come back after two five-game matches and then play a really hard game against a really good team.”

Collins-Parker said there were a lot of positive takeaways from the invitational, as the Aztecs now prepare for a six-game road stretch.

“I think overall the weekend we saw a lot of good,” she said. “A whole lot of good, and that’s what we need to build on.”

Dunbar and senior middle blocker Deja Harris were each named to the Aztec Invitational All-Tournament team.

Harris made a big impact over the weekend, tieing a personal best with 19 kills against Bakersfield and setting a new career high with 12 block assists in the Aztecs victory over Seattle.

Harris said she could not have accomplished either feat without the help of her teammates.

“Them giving me the perfect passes, my (defensive specialists), my setter being so willing to take risks and give me the ball was so helpful,” Harris said. “I couldn’t have gotten 19 kills, I couldn’t have gotten my blocks if I wasn’t able to depend on them (and) trust them. They definitely gave me confidence to just keep going, keep swinging.”

Harris finished with 17 kills against Portland, with six coming during the fourth set as the team tried to make a late comeback.

“For my game I definitely don’t hold back,” Harris said. “I’m definitely going to just keep going, keep pushing, keep putting balls down. Whenever a ball comes to me I’m going to better that ball and hopefully lead my team to a victory.”

The Aztecs look to get back on track when they head to Tucson, Ariz., where they will kick off the Cactus Classic with a match against University of the Pacific on Aug. 31.