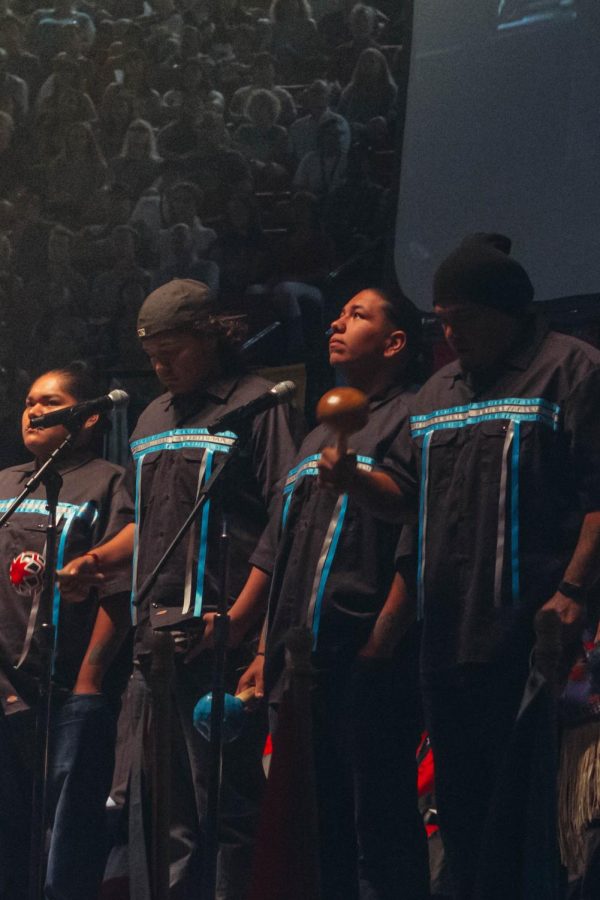 A Kumeyaay performance group was present at this year's freshman convocation.

For the first time in San Diego State’s history, traditional Kumeyaay bird singers opened the New Student and Family Convocation and the All University Convocation on Aug. 25.

The decision to include these songs in the ceremony was to teach the campus about the traditional culture of the region, said Aaron Bruce, Student Affairs Chief Diversity, Inclusion and Equity Officer.

“It’s to pay respect to the original people of the region and it was a teachable moment for our students, faculty and staff to learn about the Kumeyaay culture,” Bruce said. “The response has been very positive and I think it shows a commitment to the community.”

Though there have been requests to include bird singing in campus-wide events in the past, this was the first time that the idea was implemented. Kamper speculated that it may have been included in part because of newly-appointed President Adela de la Torre.

“The idea had been floating around previously, but there wasn’t quite the will or maybe the sort of resources to make it happen,” David Kamper, former department chair and current professor of American Indian Studies, said. “I personally feel like there are some fresh attitudes about a lot of things with the new president.”

Field said bird singing has been used to open Native American events on campus for years.

Having advocated to include bird singing in campus-wide activities for years, she is pleased that it was included in these events this year. She said that bird singing is used to open any big event or ceremony in the culture, and that it is appropriate to begin ceremonies like college convocation with it.

“I think it is always appropriate because we’re on Kumeyaay land, so I am really glad to know that the university recognized that,” Field said.

Field co-wrote a paper on Kumeyaay oral traditions and bird songs with Kumeyaay singer Jon Meza Cuero. She said those who sing bird songs serve an important role in their communities.

“If you’re a bird singer, especially if you have a group that regularly performs, it becomes a humongous responsibility where you have to go, especially if it’s for a traditional event or a death,” Field said. “I don’t think they are obligated to come to San Diego State anytime that we have an important event, but I think it is wonderful that (SDSU) asked.”

Kamper said the inclusion of bird singing should be seen as an important aspect of the overall campus culture.

Bruce said that the university hopes to continue to include bird singers in future events whenever possible.