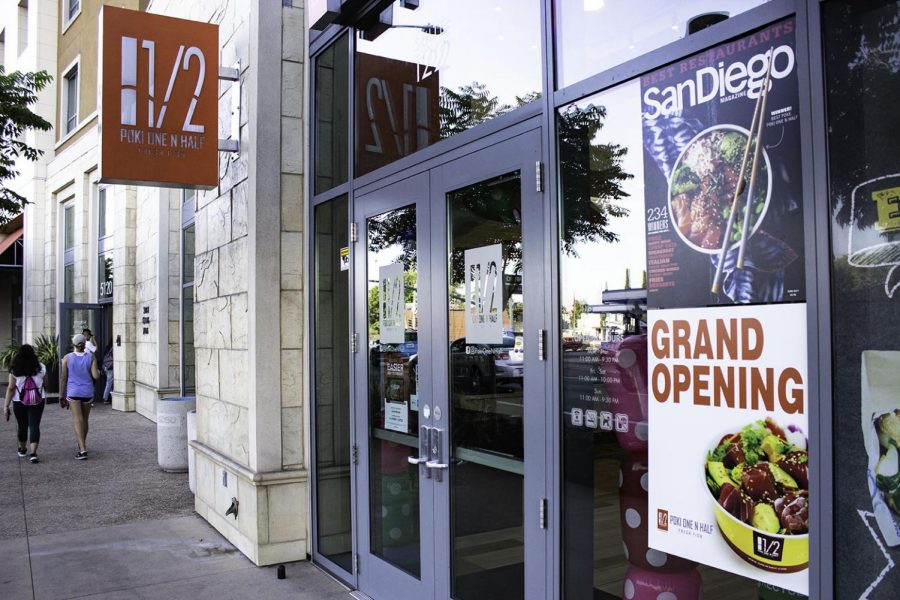 Poke One N Half is one of five South Campus Plaza restaurants that now accept meal plan.

Nearly a year and a half after the opening of the dining and housing complex, some South Campus Plaza restaurants will be added to student meal plans.

The Broken Yolk, Eureka, Epic Wings N’ Things, Poke One N Half and Which Wich Superior Sandwiches, all located below student housing at South Campus Plaza, will now be accepting payment from student meal plans.

The move to include these restaurants on student meal plans originally began after sales for the Spring 2018 semester were not as high as originally projected for all five locations, according to the The Broken Yolk’s manager Sophia Salazar.

“We had a lot of people coming in here before we were on meal plan asking if we accepted their student meal plans and we’d tell them ‘No, unfortunately we’re not,’” Salazar said. “Then they would just walk out because those were the only funds that they had available.”

Salazar said since The Broken Yolk was added to the meal plan, their sales have tripled.

Trader Joe’s is the only dining location in South Campus Plaza that was not added to the meal plan. According to SDSU Dining officials, the grocery chain is not expected to be added to meal plans any time soon, given the nature of the business.

The location, food variety and opportunity to enhance SDSU Dining were a few factors that were considered while deciding whether to add the five locations to the meal plan according to the Director of SDSU Dining, Paul Melchior.

“SDSU Dining is always looking to add more options for the students,” Melchior said. “All of the restaurants newly added to the meal plan give the students opportunities to try new things as well as healthy food options if they choose.”

While the increase in restaurants available to meal plan users has diversified campus dining options, all of these new restaurants are on the east end of campus.

Melchior said a new Aztec Market and coffee shop are expected to be added in the new student residence hall that is currently under construction on the west side of campus. According to the SDSU housing website, the new project will house an additional 800 students and is expected to be completed in August 2019.

The expansion of the Aztec Recreation Center will also provide new dining opportunities closer to the students on the west side of campus. The decision to expand the university’s gym, a project that includes plans for a healthy eatery, was passed through a student referendum in spring 2018.

Electrical engineering freshman Ruben Jaques, who is under the Flex-7 meal plan, said he is interested in exploring some of the new food options that SDSU is offering.

“I haven’t had the chance to eat at a lot of places on campus yet but there seems to be a lot of good choices,” Jaquez said. “My favorite so far is Olive Oil, but Eureka looks like it has some really good things too.”