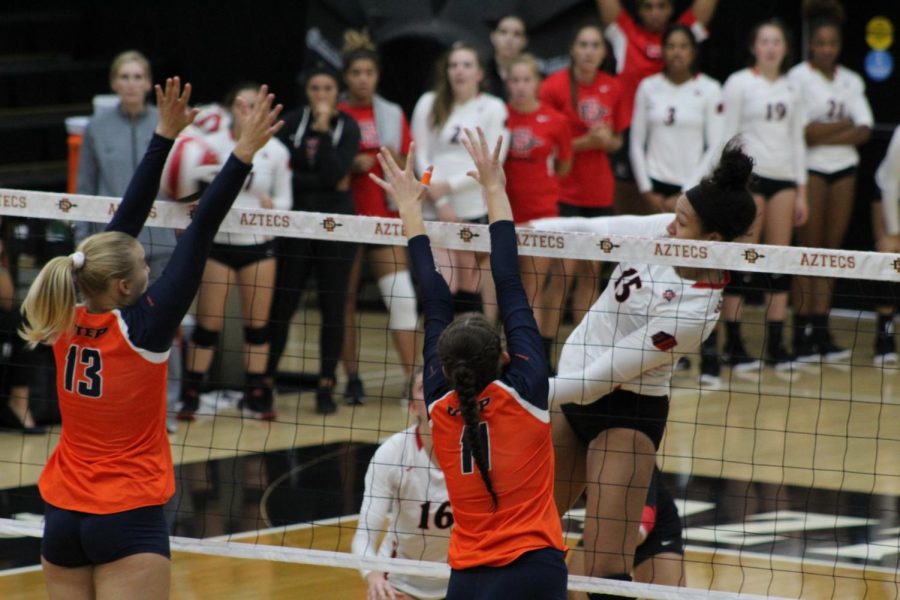 Senior middle blocker Deja Harris follows through after spiking the ball during the Aztecs five-set loss to UTEP on Sept. 15 at Peterson Gym.

Despite senior middle blocker Deja Harris setting a new career-high with 20 kills, SDSU was unable to overcome its losing streak.

Head coach Deitre Collins-Parker said it is frustrating watching a team full of potential not have things fall their way.

“I don’t think there is anything that could be more frustrating,” Collins-Parked said. “It’d be different if we didn’t have the ability, but it’s the most frustrating thing for them and me.”

The momentum was with the Miners after winning the second and third sets, but SDSU kept fighting and managed to tie up the game and force a fifth set.

Collins-Parker said she had high hopes for her team going into the fifth set.

“We really felt confident coming into set five,” she said. “We talked about what UTEP was going to do. They kind of took advantage of some things that we couldn’t do anything about at that point, which was smart on their part.”

Aztecs junior outside hitter Hannah Turnlund said that she tries to see the positive in the rough start to the season.

“It can be frustrating at times, but I think that’s really motivating us going into the season,” she said. “We know that we’re behind, but I think it’s also a good thing because the teams in conference have no idea what we’re capable of.”

Turnlund said it was nice to see her team battle to the end.

The Aztecs next chance to end their losing streak comes this evening against University of Louisiana at Lafayette at Peterson Gym.