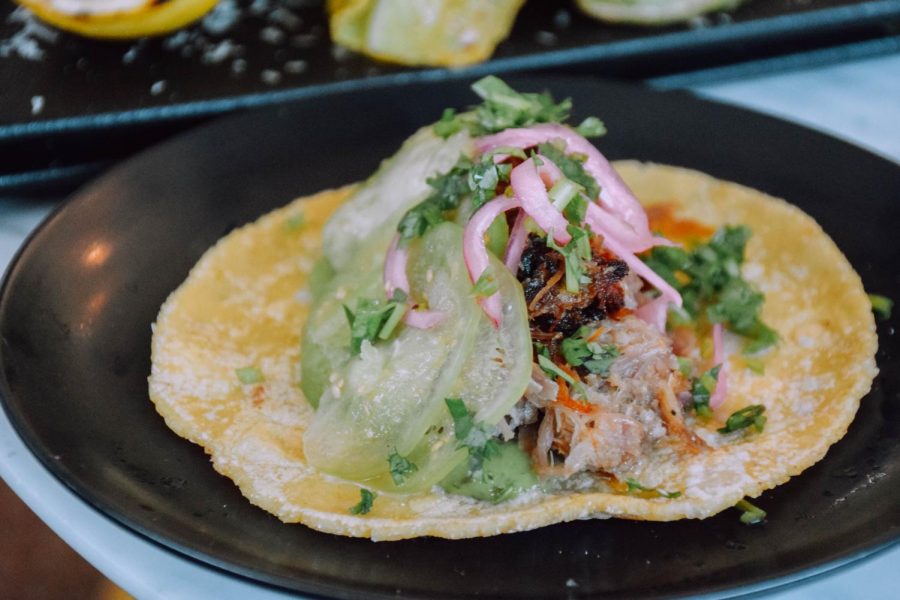 Lola 55 has only been open for a month, but in that short timeframe, it has carved out a niche portion of the gourmet taco industry in downtown San Diego. Though buzz about the restaurant began long before it opened its doors, Executive Chef Andrew Bent said he did not expect the response that they have had upon opening.

“We’ve been busier than I expected — I think more than any of us could have anticipated,” Bent said.

Plush, velvet couches and ottomans in bold colors welcome diners into the bar lounge of Lola 55, while hundreds of air plants hang in the outdoor walkway, making the space reminiscent of traveling through the streets of Peru.

Meticulous menu planning and experimentation has been one of the key elements to success for Lola 55, especially in the team’s goal of serving top-quality, gourmet foods at a reasonable price.

After being introduced to his now business partner Frank Vizcarra, they began curating the menu, in part inspired by a three-month trip to Guadalajara with his father when he was 13 years old.

“It was an absolutely mind-bending and mind-blowing experience to taste this great, old world cuisine,” Bent said. “On a personal level, I realized that growing up with a single father, I had no idea what culture was, or family, or love, or really religion. All that stuff kind of stuck with me as I grew.”

After creating and testing hundreds of recipes, Bent and Vizcarra came up with the menu that they debuted upon opening last month.

“There was about two and a half years of planning — two years of developing the menu with very extensive traveling and tons of research, tons of books, tons of failure,” Bent said. “In order to pare it down to the menu, I’ve probably made 500 iterations or more — really 1,000 iterations or builds (of the menu items).”

In creating the recipes, Bent said they also created a menu development system to ensure that each plate hit some key standards.

“Is it ‘Lola-worthy,’ is it bold flavor but light in the belly?” Bent said of his recipe development process. “It needs to meet those two criteria. If it’s like a big gut-bomb, it won’t work; if it’s too light on bold flavor, it won’t work — it has to meet somewhere in the middle and really kind of have that harmony.”

Bent’s previous fine dining and farm-to-table experience is evident in the flavor profile and quality of the menu at Lola 55.

Ingredients used in the menu are simultaneously familiar, yet presented in a completely new fashion. With spicy smoked fish, ribeye carne asada and baby carrot adobo tacos, Lola 55’s inexpensive menu has something for everyone.

Bar Director Gareth Moore had the particularly difficult challenge of creating a unique, craft cocktail menu on a budget of less than $8 a piece. Bartender Joseph MacRae said that not only did Moore succeed in doing this, but he also created housemade shrubs and cordials to echo the attention to detail in the food menu.

“Every cocktail is under $8 — in downtown San Diego, where else would you get that?” MacRae said. “All of the cocktails took a year to two years to handcraft and make, so there was a lot of time that goes into (the cocktail menu).”

With their eyes set on expanding Lola 55 into a chain of restaurants, Bent said that he and Vizcarra are careful not to rest on the laurels of a successful first month.

“There’s a lot of work still to go, and we have very lofty goals for growth and with scaling up the concept, so there’s a lot more on the organizational end that we need to button up,” Bent said. “Overall, it’s far-exceeding our wildest expectations thus far.”