Burglaries, robberies up; vehicle thefts down at SDSU 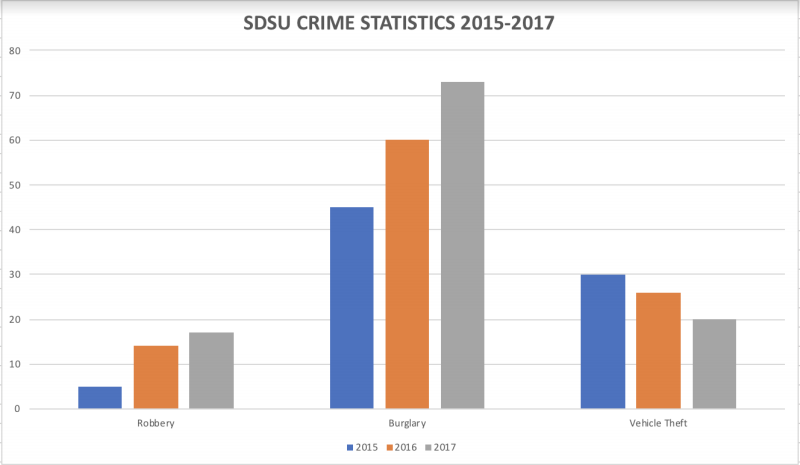 The San Diego State University Police Department has reported significant changes in the prevalence of certain kinds of crimes on campus when compared with previous years’, according to the 2018 Annual Security Report.

One of the largest changes occurred in cases of burglary. Between campus and non-campus locations, there were 45 cases of burglary in 2015. The number then increased to 60 in 2016 and to 73 for 2017, signifying a continued increase of burglary cases in the area for the second year in a row.

While burglary deals with the intrusion of somebody’s home with the intention of committing theft or another crime, robbery involves a person-to-person interacting that results in a theft.

Robbery in the College Area has been in the spotlight in recent weeks as a result of three incidents of the crime in a two-week span. The most recent incident on Sept. 8 involved an armed suspect who snatched a woman’s purse in a neighborhood near SDSU. Unlike previous incidents that occurred in the later hours of the day, the Sept. 8 crime happened in broad daylight around 11 a.m.

While cases of robbery and burglary saw increases in 2017, the reported showed that vehicle theft has decreased for the second year in a row. 2015 saw the highest number of incidents in recent years with 30 cases of vehicle theft. In 2016, the number decreased to 26 cases and then to 20 cases in 2017.

This report is released yearly in support of the Jeanne Clery Disclosure of Campus Security Policies and Campus Crime Statistics Act. The report said this act requires universities to issue timely warnings of situations that could pose a threat to the campus community and to collect and report crime data.

Editor’s Note: A previous version of this story incorrectly attributed the rates of robbery to cases of burglary. The Daily Aztec regrets this error.