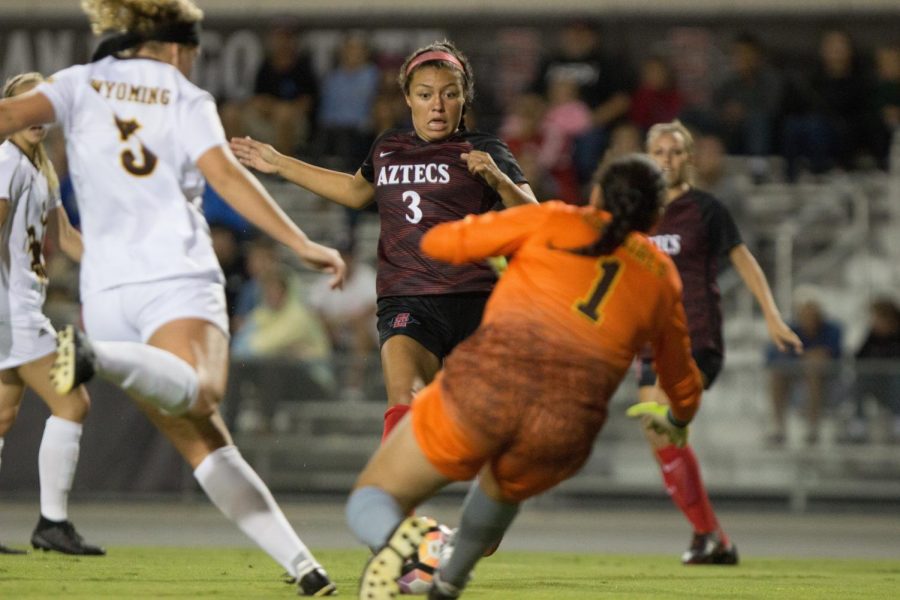 Freshman forward Taylor Moorehead reacts as she gets close to Wyoming's goal during the Aztecs 2-1 victory over the Cowgirls on Sept. 21 at the SDSU Sports Deck.

SDSU (3-6, 1-0 MW) trailed by a goal heading into the break, but broke through for two goals in a four-minute span in the second half to end a three-game losing streak and start conference play unblemished.

Head coach Mike Friesen said it was good to start conference play off with a win.

The winning goal came in the 73rd minute off the foot of junior midfielder Yasmin Ahooja, who was able to send a pass from sophomore defender Sarah Broacha into the back of the net after finding her way into the middle of the box.

The goal was the first of Ahooja’s collegiate career, and came only 11 minutes after she was subbed into the game for the first time.

Ahooja said she recognized a scoring opportunity was coming, and that her objective coming off the bench was to be in position to get off a quality shot.

“I saw my teammates sprinting, and a big point on our team recently has been to get in the box and to get shots off,” Ahooja said. “Off the bench (the) first thing in my head was go shoot on target.”

Ahooja’s goal came four minutes after sophomore midfielder Chloe Frisch scored the equalizer, sending what appeared to be a cross from outside the box into the right corner of the net, breaking a nearly-three game scoreless streak for SDSU.

Frisch said the goal, her first of the season, was actually supposed to be a pass, but ended up being just what the team needed.

“I went to cross that ball and it went a little more towards the goal than I wanted it to and just slipped in the back of the net,” Frisch said. “It ended up working out great for our team because we deserved that goal, we’ve been working hard.”

The Aztecs had been shutout in their prior two games, losses against Pepperdine and UCLA.

Frisch said she expects more goals to come, now that the drought has ended.

“I feel like we just needed to get that first goal, and then now they’re going to keep pouring in,” she said. “I think that now things will just start rolling. I think, you know, we broke the seal.”

Despite going into halftime without a goal, SDSU outshot the Cowgirls 5-3 in the opening frame, and finished the game with a 12-11 shots advantage.

Wyoming (5-2-2, 0-1 MW) took the lead in the first half following a goal by senior midfielder Annika Clayton in the 29th minute.

The Aztecs came out as the aggressor in the second half, shooting three times within the first eight minutes, including a near-goal off the foot of sophomore forward Mia Root which bounced off the crossbar in the 47th minute.

Friesen said the team did not make any real tactical adjustments at the break, focusing instead on fixing their overall mentality.

“The message at halftime was this is not an acceptable way to play,” Friesen said. “We need to play together and get after it and  be competitive and fight for everything.”

Next up for the Aztecs is a three-game road trip, starting with a quick turnaround against Colorado State University in Fort Collins on Sept. 23.

Friesen said the team is excited to continue with the conference season, but will need to keep a mentality that every game must be fought for.

“I think from a team perspective they’re excited and ready to go,” Friesen said. “They’re just going to have to grow up real quick, and learn like, ‘Oh I can’t just show up to the game and win because we might be better.’ Its got to be that we actually earn it.”