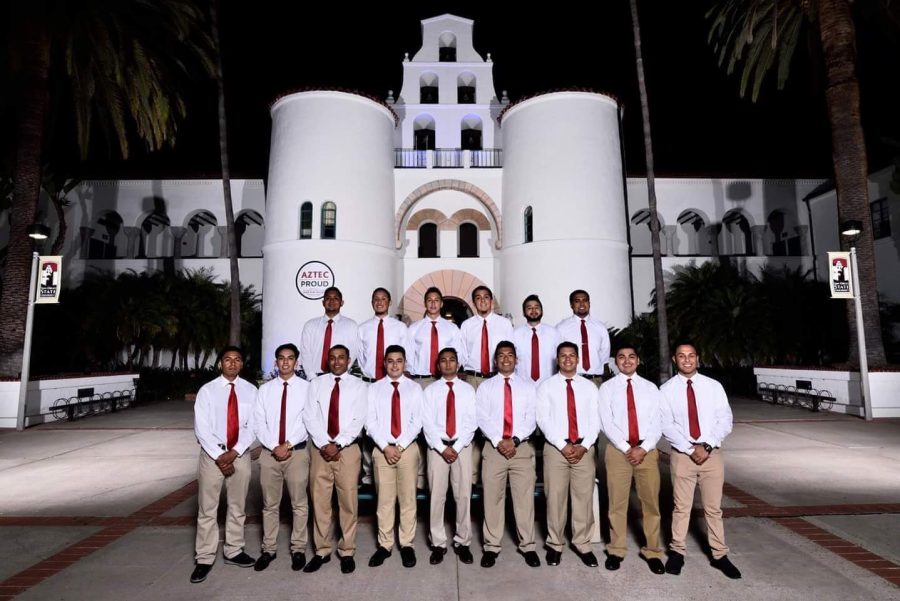 Photo of SDSU's chapter of Nu Alpha Kappa, a Latino-based organization on campus.

Psychology senior and Lambda Sigma Gamma President Valentina Valenzuela said her first months at San Diego State were met with a lot of culture shock. Coming from the Bay Area, she knew no one at SDSU, other than one other student from her high school.

Valenzuela said even though she made friends her freshman year, she was still missing that “family feeling” on campus,  until she joined Lambda Sigma Gamma, a multicultural sorority.

Lambda Sigma Gamma is one of many multicultural fraternities and sororities at San Diego State that gives focus to cultural identity while inspiring students to succeed academically.

While multicultural fraternities and sororities are still considered social Greek organizations, they place more emphasis on the cultural identities of its members and are governed under the United Sorority and Fraternity Council at SDSU.

“I was just walking around one day, and these girls approached me, and they were so comforting,” Valenzuela said.

Valenzuela, who was a sophomore when she was approached by members of the sorority, said she still had not declared a major at that point and didn’t know what she wanted to pursue before joining the sorority. Three years later, Valenzuela was able to find her major with the help of her sorority sisters and pursue an officer role within the organization.

“I’m a first-generation Hispanic student and, when I came to SDSU, I wanted to find a place where I could relate to a lot of people,” Galvan said.

It was Galvan’s desire to meet people who shared his background and goals that led him to join Nu Alpha Kappa.

“My first year, I didn’t know if I wanted to be in a fraternity,” Galvan said.

He said his hesitation stemmed from hearing about the party reputation some fraternities had. But, after learning more about Nu Alpha Kappa, Galvan decided to give the fraternity a try.

“A lot of us, I think, had the same goals of one, making our parents proud and our families proud (and) two, making sure that the future generations also have a good example going forward,” Galvan said.

According to the National Multicultural Greek Council’s website, multicultural fraternities and sororities were founded as a result of the lack of support networks for Latinos and other minorities entering college campuses.

The mission of the National Multicultural Greek Council is to promote multiculturalism within these Greek organizations while advocating justice, equality and empowering its members.

However, while some of these multicultural Greek organizations were historically founded by certain ethnic groups, many are embracing members from diverse backgrounds to make their chapters more inclusive.

“We strive to empower all women, regardless of their background or culture,” Hernandez said.