Aztecs come away with 19-13 road victory over Boise State 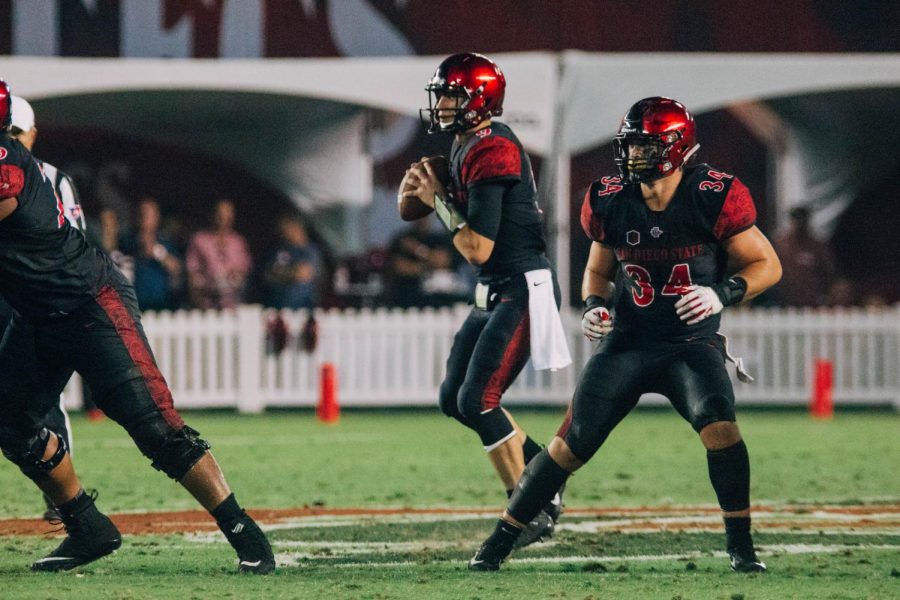 Junior quarterback Ryan Agnew looks to pass during the Aztecs 28-14 victory over Sacramento State on Sept. 8 at SDCCU Stadium.

Back up quarterback? Back up running back? No problem.

SDSU (4-1, 1-0 MW) led by 13 points in the fourth quarter and held off a late Boise comeback attempt for their first victory in Mountain West Conference play.

The Aztecs lead was six heading into the final frame, and the team added some breathing room following a 72-yard touchdown run by true freshman Jordan Byrd.

With just over 10 minutes remaining, Byrd took a pitch from junior quarterback Ryan Agnew and streaked down the sideline for the first touchdown of his career and the second of the game for the Aztecs.

Agnew, starting for the third straight game in place of Chapman, had a turnover free outing while throwing for 113 yards to five different receivers.

Boise (3-2, 1-1 MW) cut the Aztecs lead to six with 3:05 to play, following a 72-yard touchdown drive which ended with a one-yard touchdown run from junior running back Alexander Mattison, but the Broncos were unable to score again after getting the ball back with 1:59 to play.

SDSU was able to contain a normally-explosive Boise offense, which came into the game averaging over 500 yards, but were limited to 229 on Saturday.

The Aztecs tagged Broncos’ quarterback Brett Rypien for his first two interceptions of the season while sacking the senior three times.

Sophomore running back Chase Jasmin, starting for the first time in his career, finished with 78 carries on 26 yards as the workhorse out of the SDSU backfield.

The Aztecs went into the break leading 13-7, after a mistake-filled first half which included five combined turnovers.

Two came courtesy of Rypien, who came in averaging over 340 yards a game and three touchdowns.

Rypien finished this one with 171 yards and no touchdowns, and the first pick of his season came after freshman cornerback Darren Hall stepped in front of a pass less than five minutes into the game, giving SDSU starting field position at the Broncos 24-yard line.

The Aztecs ended up settling for a 37-yard field goal from senior kicker John Baron II, who earned another three points later in the half after a Boise muffed punt gave SDSU starting field position at the Broncos 31-yard line.

SDSU looked like they were set to score a touchdown on that drive, but a four-yard touchdown run by Jasmin was negated by a holding penalty by junior tight end Parker Houston, and following a false start and sack, were forced to settle for a 42-yard field goal.

The Aztecs finally found the end zone after senior linebacker Ronley Lakalaka intercepted a pass from freshman quarterback Chase Cord, which gave SDSU the ball at the Broncos 17-yard line.

Cord was hit on the play by junior linebacker Kyhava Tezino, forcing a poor throw which landed in Lakalaka’s hands right at the defensive line.

A Boise pass interference penalty then set up Jasmin for a short two-yard touchdown run with 4:36 to play before the break.

Boise’s only score in the half came after freshman wide receiver Ethan Dedeaux muffed a punt near the shadow of his own end zone, giving Boise starting possession at the SDSU 4-yard line.

The Aztecs held steady on first and second down, but Mattison plunged in for a one-yard touchdown on third-down for the Broncos first touchdown with 6:48 to play in the first quarter.