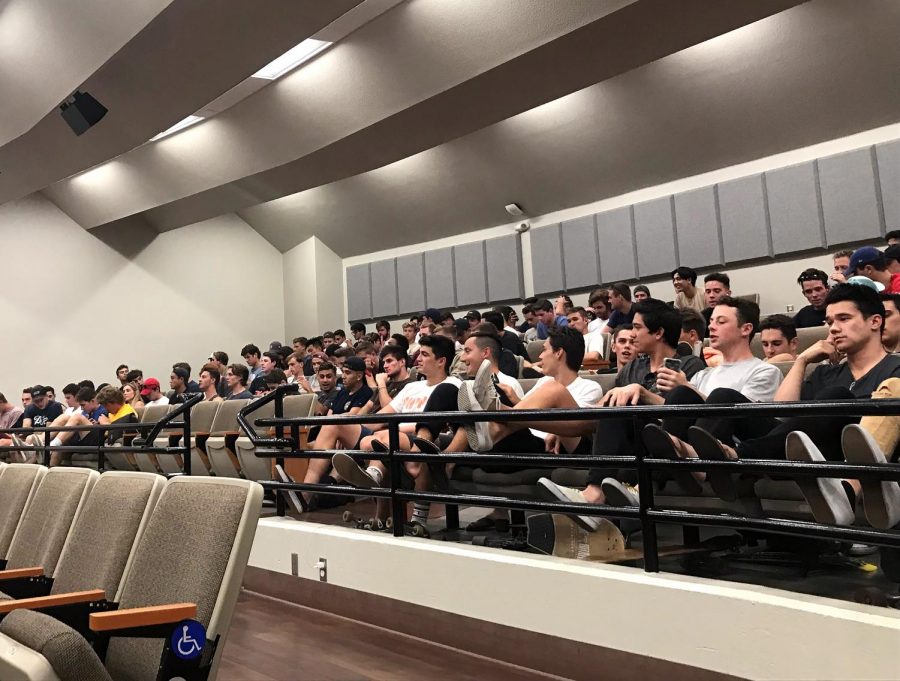 During the seven months the Interfraternity Council social moratorium, or party ban, was imposed on campus social fraternities, chapter members were kept busy by a number of educational events that sought to solve the exact issues that made the moratorium necessary.

These events touched on topics such as toxic masculinity, alcohol and drugs, hazing prevention and being a good neighbor.

As a result of the social moratorium, Interfraternity Council President Jacob Mahony said a total of 700 fraternity members were educated on a number of topics relating to issues fraternities deal with on campus.

While events like “Good Greek, Better Neighbor” touched on issues like how long one is allowed to leave their trash cans on the curb by their house, others were more heavy-hitting. The Sept. 26 lecture on toxic masculinity, with an attendance of at least 400 fraternity members, had a level of popular resistance from audience members.

“How many of you have ever been told to ‘man up’?” asked Chris Lara, one of the residence hall coordinators who led the event.

Almost every fraternity member in the room raised their hand.

However, two videos centered around toxic masculinity that were shown later at the event were not as well received. Some audience members were resistant to the content because they believed the videos were generalizing and that showing the videos wouldn’t create any real change.

“We came into this presentation thinking there might be some hesitation or some resistance but we kind of realized, ‘Hey, you’re proving our point that this is an issue that needs to be addressed,’” Lara said.

Lara said he agreed a single lecture would not be adequate in addressing the larger societal issue of toxic masculinity. However, speaker and Residence Hall Coordinator Devin Marine said the videos, which were paired with small group discussions, were more effective than other teaching methods in the way they challenged the audience members’ ideas.

He began by asking whether the audience had been given an alcohol or drug presentation before, a question that led to a sea of raised hands.

“Well, I am going to try my best to not do one of those,” Lange said. “I am just going to try and answer questions.”

With the kinds of issues that led to the creation of the social moratorium, this lecture could be considered especially important.

Mahony said the decision to impose a moratorium came once the IFC realized seven out of 15 fraternities were on an “elevated status,” meaning they were undergoing an investigation or were on a suspension or probation.

He said most of these were the result of incidents relating to drinking that led people to be taken to hospitals.

Lange said, while one-time lectures are not ideal, they have proven to get people at least thinking about the content at hand, making them more open to making change in the future.

“This particular approach has been demonstrated to be effective, not necessarily exactly the way I do it, but with many of the same features,” Lange said.

The other two events, focused on hazing prevention and being a good neighbor, drew smaller crowds. Mahony said the hazing prevention event featured the screening of a film followed by a discussion, which he said was received positively. “Good Greek, Better Neighbor,” took time to inform fraternity members of common complaints from community members, such as excessive partying noise and improper street parking.

As a result of these events reaching their required attendances, the IFC unanimously voted to retire the social moratorium on Oct. 4. Mahony said the IFC now plans to focus their attention on the new ban on hard alcohol, which was also unanimously approved on Oct. 4.

“ … We are still very much in this process as an IFC where we are attempting this culture change here,” Mahony said. “Right now, a big focus for us is enforcing this hard alcohol ban.”

Mahony said the ban on hard alcohol is intended to make the community safer and hopefully help alleviate a number of the issues that plague fraternities on campus.