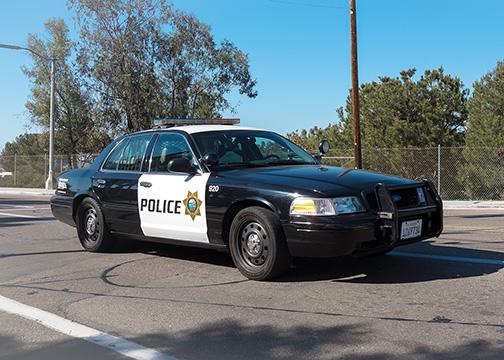 Suspicious Person
A non-SDSU student was arrested and taken to jail for public intoxication and obstructing a peace officer around noon on Sept. 25.

A man was found sitting on a bench, grabbing himself and screaming at the Viejas Arena turnaround at 9 a.m. Oct. 2.

Burglary
A grey Samsung Galaxy S5 was reported stolen out of an office in Student Services East around 9:30 a.m. Oct. 2.

Around 1 p.m. Oct. 3, reports were taken of a lost of Apple keyboard, Logitech mouse and phone handset from the Communications building.

At 6 a.m., janitors found office hours signs and photographs had been taken down from office doors in the Communications building. Tacks that had been used to hold up the signs were left in the hallway and on chairs, classroom chairs were turned upside down and fire extinguishers were removed from their holding containers, according to Heather Canary, School of Communications director.

“Although this is categorized as vandalism, there was no damage, nobody was harmed and it was done when nobody was actually in the building,” Canary said.

An SDSU student was cited for theft for a hydroflask from the SDSU Bookstore around noon Oct. 1.

An SDSU student was detained and received an administrative citation for theft of a hydroflask accessory kit from the SDSU Bookstore around 2 p.m. Oct. 1.

An individual was detained for theft of a Bluetooth speaker from the SDSU Bookstore and a juvenile who is not an SDSU student was cited and released to their high school staff around 5 p.m. Oct. 2.

An SDSU student was cited for theft of a hydroflask from the SDSU Bookstore around 7:15 p.m. Oct. 3.

One iPad and five laptops were reported missing from inventory in Adams Humanities around 11 a.m. Oct. 4.

A non-SDSU student was cited and told to stay off campus for seven days after the theft of 11 items of $90 value from the SDSU Bookstore a little after 10 a.m Oct. 5.

Trespassing
At 11:30 p.m. Sept. 28, a non-SDSU student snuck into Tula Hall and was arrested for an outstanding warrant.

A person ran past the front desk of Tacuba Hall and ignored the desk orders to show ID and was unable to be located around 12:45 a.m. Sept. 29.

A non-SDSU student was issued a misdemeanor citation for possession of narcotics and drug paraphernalia on Alvarado Court near Alvarado Road around 3:30 p.m. Oct. 2.

Vandalism
Around 1 p.m Oct. 3, reports were taken of damages to a car door which was keyed with “#S 666” and straight line under it in Parking 3 on East Campus Drive.

A little after 3 p.m. Oct. 4, stalls of the second floor men’s restroom in Adams Humanities were painted with racial slurs and profanity.

Alcohol and Drugs
Around 12:45 a.m. Sept. 30, a woman was reported passed out in the middle of the street in front of Delta Zeta Sorority.