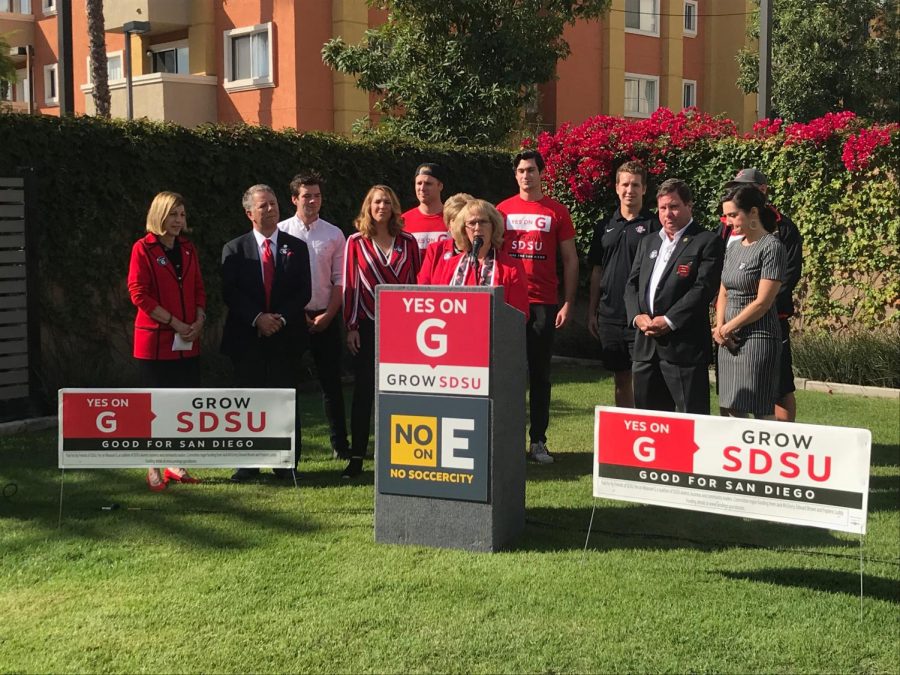 Former San Diego State Interim President Sally Roush and others came out together in support of SDSU West, or Measure G, during a press conference on Oct. 15.

These latest endorsements are not the only win Measure G secured this week. On Sunday, Oct. 14, a SurveyUSA poll commissioned by the San Diego Union-Tribune and 10News showed the majority of San Diegans favor Measure G. Currently, 57 percent of voters are in favor of Measure G, while 32 percent said they’re in favor of Measure E.

“Measure G is the only initiative developed with the best interest of San Diego State and the entire city in mind,” Bry said during the press conference. “An investment in education is an investment in San Diego.”

Bry said the existing stadium site would be one of the final chances for the university to expand, adding that the expansion would accommodate thousands of San Diegans with access to higher education.

Roush, who served as SDSU’s interim president during the 2017-18 school year, said she knows firsthand the need for the university to expand.

“This is truly a once-in-a-generation opportunity for the university to receive the land it needs to grow,” Roush said during the press conference. “Our entire region will benefit from providing SDSU with the opportunity to grow.”

Friends of SDSU Steering Committee Member Fred Pierce said, through an open and transparent process, Measure G would transform the current stadium into a new academic community for the university.

“Measure G invests in the university while Measure E fails to accommodate the university’s critical need to expand,” Pierce said during the press conference.

This week has seen a heavy influx of endorsements for Measure G. On Oct. 10, the San Diego Stadium Coalition announced its endorsement for Measure G, followed by the League of Women Voters on Oct. 11.A group of environmental leaders then endorsed Measure G at a press conference on Friday, Oct. 12.

Despite this, SoccerCity project manager Nick Stone said he was proud of the endorsements Measure E has received, adding that their endorsements have been based on merit instead of “insider politics, personal relationships or financial contributions.”

“Our supporters know that SoccerCity will generate twice as much tax revenue as the competing measure and not require the use of any taxpayer money or any increase in student fees,” Stone said in an email response.

A letter issued by SDSU this past September accused the SoccerCity campaign of making misleading claims regarding how the university would pay for the stadium.

SoccerCity responded with their own 12-page letter, denying any false claims were made in their campaign.