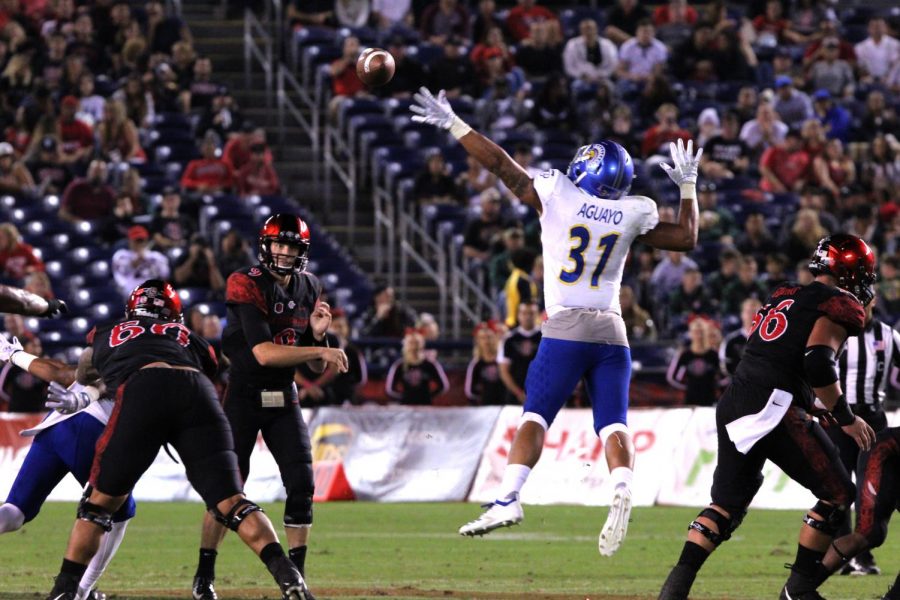 Junior quarterback Ryan Agnew attempts to complete a pass during the second quarter of the Aztecs' 16-13 victory over SJSU on Oct. 20 at SDCCU Stadium.

The Aztecs (6-1, 3-0) found themselves tied at 13 going into the final quarter against a winless Spartan team that came in with the 114th ranked defense and 123rd ranked offense in the country.

“San Jose State gave us everything we could handle tonight,” junior quarterback Ryan Agnew said. “They are an outstanding football team, their record doesn’t show it.”

Sophomore cornerback Tariq Thompson gave the Aztecs a spark in the fourth quarter, after he intercepted a deep pass thrown by SJSU quarterback Josh Love, returning it to the 50-yard line with 7:15 to play.

Baron finished a perfect three for three on the night, and had the game-deciding field goal for the second time this season.

The Spartans got the ball back with 51 seconds left in the game, following an Aztecs three-and-out.

SJSU watched the clock run out on its final drive, failing to get out of bounds following a tipped pass from Love that was caught by Love himself.

Agnew finished the game completing seven of 11 passes for 86 yards, while rushing five times for 16 yards.

“They didn’t give us many opportunities to throw the ball,” Agnew said. “If we do our job the way we’re supposed to do it, no one should be able to stop us.”

SDSU called upon a duo of backs, as sophomore running back Chase Jasmin and redshirt freshman Chance Bell combined for 31 carries, 152 rushing yards and a touchdown.

“There’s a lot of injuries that are making us play a lot of young guys,” Long said. “Obviously, the running back situation is one where we’re looking for a starting running back.”

The Aztecs rushed for over 200 yards, making their record now 39-0 when reaching that mark.

The Spartans forced a three-and-out on the Aztecs’ first drive and capitalized off a fumble by SDSU redshirt freshman running back Kaegun Williams on the Aztecs’ next drive.

“We need to be better at everything honestly,” Tezino said. “Covering, passing, running. As a defense, we hold ourselves to a higher standard, so whenever we go against an opponent, we expect them to score no points.”

The Aztecs’ fifth-ranked rush defense in the country contained the Spartans on the ground, allowing only 62 yards with an average of 1.8 yards per carry.

SDSU started to gain offensive traction on a screen play from Agnew to Jasmin, resulting in a 23-yard gain and putting the team in the red zone for the first time.

The Aztecs finished the drive with a one-yard touchdown by Jasmin following a roughing the passer penalty, giving them their first lead of the game at 7-6 with 13:11 to play in the first half.

The Aztecs travel on the road next weekend to face Nevada.