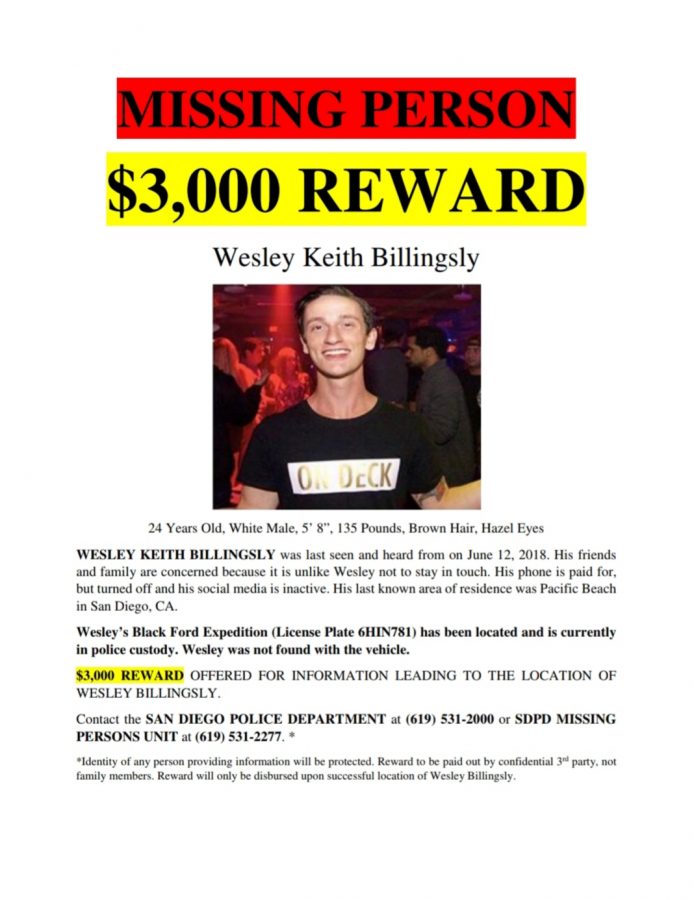 A San Diego State alumnus has been missing for nearly five months, and his mother is offering a reward for information on his whereabouts.

His mother, Christel Billingsly, posted a $3,000 reward for anyone who can help find him.

Wesley’s car, a Ford Expedition, was confirmed to have been found by the San Diego Police Department, but further details were being kept confidential as the investigation is still active.

“They don’t share details with me so I just have to sit and wait and wonder and pray and hope,” Wesley’s mother said.

In an effort to continue spreading the word about Wesley’s disappearance, his mother recently created a Facebook page titled “Help Find Wesley Billingsly,” where people can find more information regarding his case.

He was supposed to meet up with friends on the evening of Tuesday, June 12 but did not show up, according to his mother. She said his phone had been turned off during that whole evening.

“It was turned off on that evening on Tuesday, June 12, and we haven’t seen or heard from him since,” Christel Billingsly said. “I don’t know, he just vanished. Disappeared.”

She filed a missing person case with SDPD and made a Facebook page spreading information about his missing status, featuring photos of him and physical descriptions such as his tattoos.

She also said it was common for him to actively keep in touch with his family and that it was out of the ordinary for his family to not be receiving updates from him.

“It’s not like Wesley,” she said. “I mean, he is in constant contact with his family. His brother and myself, every couple of days, hear ‘Hey mom, how are you? I love you. Good Morning.’ You know, it just stopped.”

Those with information regarding the disappearance of Wesley Billingsly can contact the San Diego Missing Persons Unit at (619) 531-2277, case # 18500457.

Wesley Billingsly is 5’8” and 130 lbs with brown hair and hazel eyes. He has some prominent body tattoos on his upper right arm and below his right shoulder.