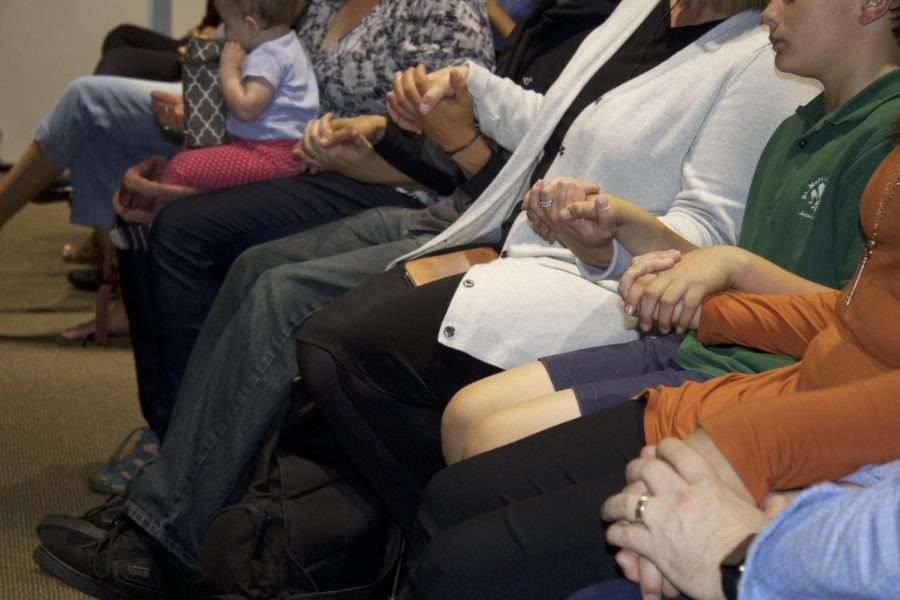 Community members hold hands at a campus vigil on Oct. 29 in honor of those lost in the Pittsburg synagogue shooting.

by Bella Ross and Sofia Bert

The crowd of university and community members, sitting silently among one another in a moment of reflection, joined hands.

“We will build a better world,” San Diego State President Adela de la Torre said. “Together, we will be one again.”

In response to the mass shooting of 11 Jewish individuals in a Pittsburgh synagogue on Saturday, University officials worked with the Hillel center at San Diego State to host a vigil in honor of those lost.

The central message of the vigil was clear – seek community, increase the light.

WhileHillel Regional Director for Israel education Tina Malka said listeners may discount statements of this nature as mere fluff, she added in times like this, there is no other option.

“What’s the alternative?” Malka asked. “Stepping into the pain and the rage and letting that consume you? People who spread violence and hate, that is what they’re after. They want people to feel that way.”

Students, faculty and staff were notified about the vigil in a mass email sent by de la Torre on Monday afternoon. In the email, she emphasized the importance of community in light of trying times.

“To all members of the Jewish community: We stand with you, we support you, and we will continue to do our part to promote a more compassionate society,” de la Torre said in the campus-wide email.

Malka said maintaining a sense of community is the most important thing people can do to support those who are struggling.

“The magnitude of of this brutal attack of anti-semitism to jews sitting in a synagogue praying on a Saturday morning is hard to fathom for some people,” Malka said. “I think tragedy and death are not things people can handle on their own.”

As for addressing the hate that leads to these kinds of tragedies, Malka said it is important for people to remember that these attitudes are not inherent in humanity.

“Fighting hate with hate doesn’t work,” Malka said. “Hate is something that is taught, right? There is no baby that’s born hating anyone. It’s taught carefully and subtly by people, but it’s taught. And it is our job, both for ourselves and for others, that we help people unlearn that.”

According to their website, the Hillel center on Lindo Paseo serves as a safe space where Jewish students at SDSU can gather with the rest of the Jewish community. The space consistently works at “inspiring and enabling young Jews to find their place in the world.”

De la Torre said the university stands with students who feel vulnerable during times like this, and that she hopes students will make use of the resources available to them.

“You need to know, from the bottom of my heart, that this kind of tragedy will never define us as a community,” de la Torre said. “We are always one, and I will always be here for you.”