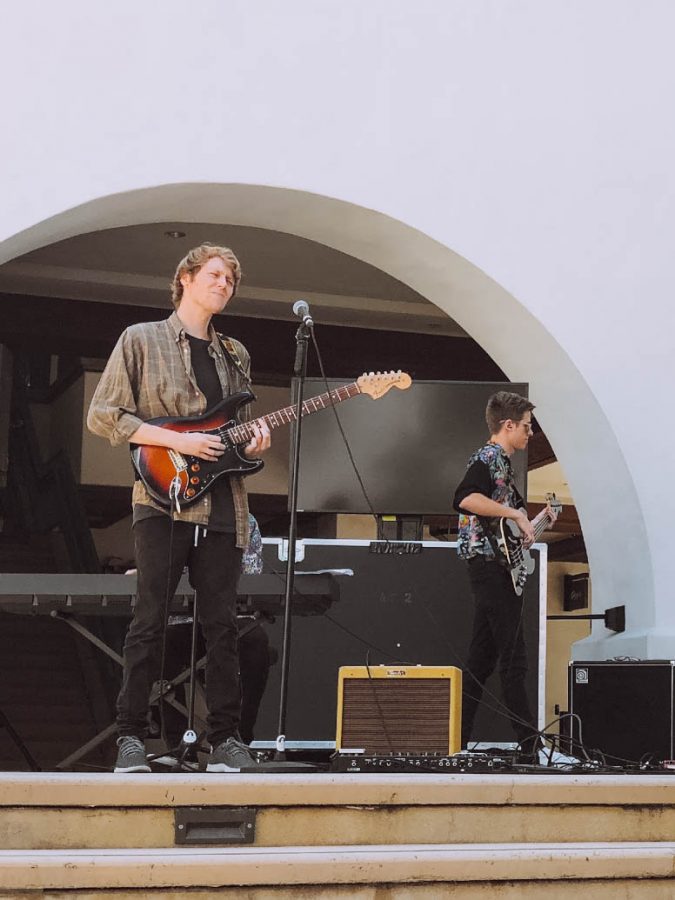 After a childhood spent learning various musical instruments, senior jazz major Thomas Frye is now using his skills to innovate in a new conglomerate genre he refers to as “alternative jazz.”

“My music has grown to be more jazz-influenced over my time here (at San Diego State), but definitely not in the traditional sense of the word,” he said. “If you can put jazz, R&B, hip-hop, psychedelic rock and cinematic music together, I guess that would be the sound. I call it alternative jazz for short.”

Frye has been playing music for more than 10 years and was drawn specifically to guitar-playing and songwriting at a young age.

“My first instrument was alto saxophone when I was nine,” he said. “But when I was younger, guitar was the one that made sense to me.” Frye started playing when he was 11, and it did not take him long to start realizing he needed a way to express himself.

Neither of Frye’s parents played instruments themselves, but they always made sure music was an instrumental part of Frye’s upbringing.

“They constantly raised me with music and other forms of art, such as paintings, poetry and theatre,” the musician said. “So thinking critically about art wasn’t foreign to me.”

Growing up, some of Frye’s main inspirations were blues-inspired guitarists like Jimi Hendrix, John Mayer and Stevie Ray Vaughan, and 1970s folk songwriters like Jackson Browne and Simon and Garfunkel.

When he started high school, Frye got more and more invested in other instruments such as bass, piano, vocals, as well as getting back into the saxophone.

“I got more into audio production and composition, so that forced me to get into other instruments,” Frye said. “Towards the end of high school, I realized that jazz music was the genre that was going to push my playing and my writing to its fullest potential, so I came to SDSU as a jazz major.”

Since Frye has been at SDSU, he has been involved in a variety of projects, including getting deep and personal with a neo soul/hip-hop band that played a show at the House of Blues in San Diego.

“I’ve had some really great opportunities that have helped me craft my sound,” Frye said. “The project was about rising out of a darker place to experience what it means to live for the things that lift you up. And when it is said and done, it is just another ‘phase.’ It was awesome to collaborate with some great musicians and even instructors here at SDSU. I can now acknowledge that project as another phase in my life as I continue to push myself to be a better musician and human being.”

Frye also recently performed as a solo artist on campus, though accompanied by his live band, as part of the Conrad Prebys Aztec Student Union series, Nooner.

Frye said his dream venue to perform at would be the Forum in Los Angeles, and he wishes he could collaborate with the late Jeff Buckley.

However, Frye said he feels lucky enough to write music with his band: bassist Lydon Quill, drummer Jay James, keyboardist Jesse Aaron and saxophonist Isaiah Davis. Together they wrote the EP “Spark,” which can be found on a variety of streaming services.

“I think I’m blessed to be able to collaborate with the guys I feature on the EP,” Frye said.

He said he also hopes to expand his sonic palate to the sounds of Europe, and cited Alfa Mist, Yussef Dayes and Jordan Rakei as some European jazz artists he would like to collaborate with.

Environmental science sophomore Hanna Rueter was at a Green Love meeting in the Union courtyard when Frye was performing at the Nooner.

“The music started playing during the meeting, and I just loved the vibe of it,” she said. “The band had a nice stage presence and were creating some great tunes that set the mood for that sunny day.”

Frye wants people that might see jazz as a forgotten genre to realize it can be worthwhile and relevant by today’s standards.

“My main goal is to present my music to people who wouldn’t normally be into the jazz sound and to get them interested in the genre,” he said. “It’s about changing people’s perspective on an American sound that may seem dead. It makes me happy when someone who doesn’t know jazz hits me up and remains affected by the music and hungry for more.”