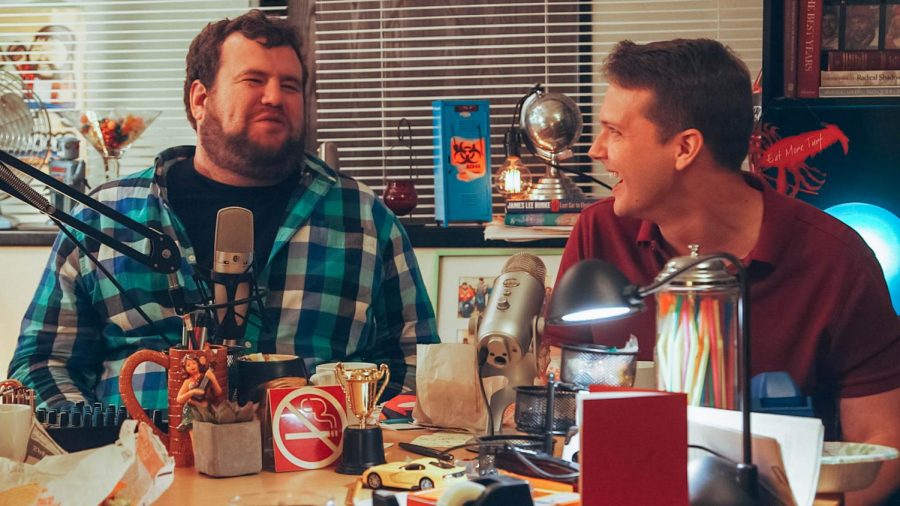 Meals at chain restaurants are usually evaluated as cheap, bland and unhealthy in comparison to their single-location equivalents. Why order Taco Bell when an authentic, family-owned Mexican eatery is right next door?

With their comedy podcast “Doughboys,” hosts Nick Wiger and Mike Mitchell discuss and rate chain restaurants on their own merits, bringing earnestness in legitimizing those who have attachments to these corporatized eating establishments.

Comedians Wiger, who is a current writer for Sarah Silverman’s Hulu series “I Love You, America” and has previously written for “@midnight” and “Comedy Bang! Bang!,” and Mitchell, who appeared in the Netflix series “Love” and is a member of sketch comedy group The Birthday Boys, met at the Upright Citizens Brigade theater in Los Angeles.

They formed the podcast “Doughboys” in 2015 on the basis of their shared love of fast food. Each episode, released weekly, is focused on one chain restaurant which Wiger, Mitchell and a guest rate on a scale of zero to five forks after discussing their most recent dining experience at the restaurant.

Past guests include “The Usual Suspects” actor Kevin Pollak, actor and podcaster Jason Mantzoukas, actress and comedian Nicole Byer and many others in and around the comedy community.

The main pull of the podcast’s hook is the shared nostalgia people have for the chain restaurants they frequented as children.

The show has seen growing success over its three-year run. “Doughboys” has maintained a steady position in the top-200 comedy podcasts on iTunes, and its Twitter account is closing in on 20,000 followers.

The humor of “Doughboys” though, comes largely from the contentious relationship between the hosts. Sources of disagreement between Mitchell, who hails from Boston, and Wiger, a lifelong Californian, include sports, “Star Wars” and, of course, food. For instance, while Mitchell is a loyalist to Taco Bell, Wiger maintains a fierce allegiance to Del Taco.

The hosts’ hard stances in these seemingly arbitrary debates are shed of any possible elitism over chain restaurant food, and are part of what makes “Doughboys” a novel podcast in the comedy world. These passionate opinions are often reflected in “Doughboys” fans as well, who are not hesitant to vocalize them to the hosts via social media.

“The thing that surprises me is that you’ll find a staunch defender of, like, Papa John’s Pizza,” he said. “You would think the biggest fan of Papa John’s Pizza would be like, ‘Yeah, it’s OK.’ But then there are people who love it … and think you’re crazy for saying anything negative about it.”

Though podcasting has become increasingly ubiquitous, it’s still a fairly new format that listeners and creators are learning to navigate. The relationship between host and listener, specifically, is something that’s been difficult to define in Wiger and Mitchell’s experience, especially considering the intimacy of the platform and the way the two comedians interact with each other.

“We’ll make fun of each other,” Mitchell said. “And then you’ll see something online where someone’s like, ‘You have an IQ of zero’ … and you’re like, ‘Hey, that’s not cool.’”

“Yeah, it’s like, I don’t know you,” he said. “You’re just a stranger with a Scrooge McDuck avatar. I have no context for who you are. You’re just being abusive to someone you’ve never met. It’s an over-familiarity sort of thing. Like, ‘Oh, these guys are having fun with each other. I’m listening to them a lot. It feels like I know them, I’m gonna go online and rib them.’ But that comes with the territory.”

Despite the few trolls, the “Doughboys” fans have been overwhelmingly kind and helpful to show, according to the hosts.

“The majority of the people (who listen) are awesome,” Mitchell said. “They love to have their opinions on stuff, and sometimes they’re right. Sometimes we’re very wrong. If we get something off, we hear about it, and it’s good to hear about it.”

Mitchell and Wiger will come to San Diego Nov. 30 for a live episode of “Doughboys” at the House of Blues. Yet to announce what restaurant they will be reviewing for the episode, they tend to choose a regional chain for live shows: they reviewed Whataburger for a live episode in Dallas, Mel’s Drive-In in San Francisco and Pink’s Hot Dogs in L.A.

Wiger said the live audience element of these shows can throw a curveball into the podcast’s usual format.

Based in L.A., Wiger and Mitchell have both spent their fair share of time in San Diego and are impressed by the food scene, citing local Mexican spots Roberto’s and Rigoberto’s, and local breweries as favorite places to visit when they travel south.

The Nov. 30 show will be the first live “Doughboys” episode in San Diego, and Mitchell and Wiger plan to announce more Southern California live shows soon.