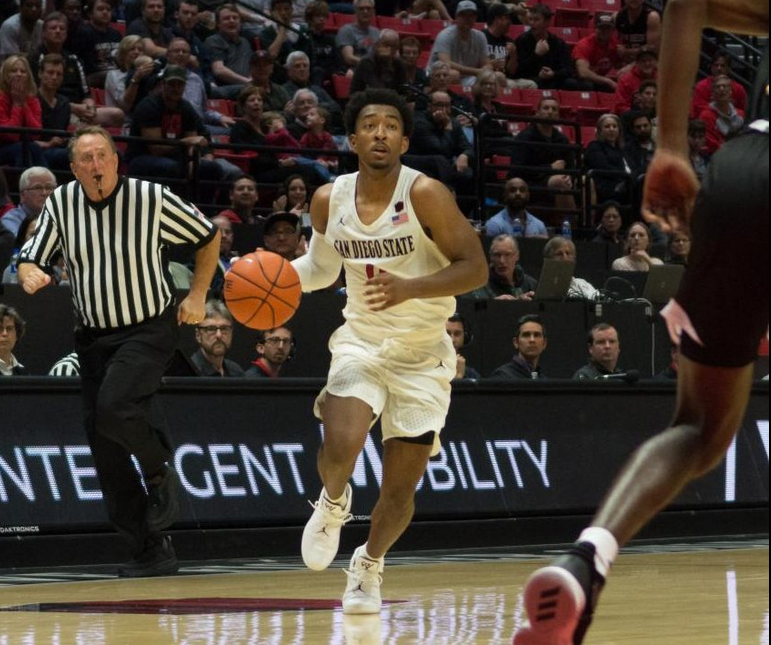 Senior guard Devin Watson looks to initiate offense during the Aztecs' 76-60 victory over Arkansas-Pine Bluff on Nov. 6 at Viejas Arena.

“I had a little Steph Curry moment. I shot the ball. I didn’t look at it. I just turned around and started running down court,” Watson said about knocking down one of his career-high six threes.

Watson was a bright spot during the Aztecs’ 76-60 home-opening win against Arkansas-Pine Bluff on Tuesday evening at Viejas Arena.

Much of the credit for Watson’s good looks on the floor went to the Aztecs’ ball movement, as eighteen of SDSU’s 24 made field goals came courtesy of an assist.

Watson said the play of his teammates allowed him to knock down multiple threes and score a team-high 20 points.

“I feel like the ball movement tonight helped,” Watson said. “Guys were finding me, I was finding them. Most of those threes were wide open.”

SDSU head coach Brian Dutcher said Watson arguably played his best ball as an Aztec, from his scoring to initiating the offense.

“Devin might’ve played his best floor game that I’ve seen him play here,” Dutcher said. “And then you add the way he shot the ball…he was the catalyst for a lot we did offensively.”

Redshirt sophomore forward Jalen McDaniels was one rebound away from a double-double, finishing with 15 points and nine rebounds.

After going three of seven from the free throw line in an exhibition victory against Chaminade on Nov. 1, McDaniels said he was determined to get better, and responded by hitting four of six from the charity stripe.

“I was just trying to hit free throws,” McDaniels said. “I was missing a lot of them, so that was what that focus was on really.”

With 11:21 left in the second half, McDaniels and Arkansas-Pine Bluff junior center Issac Bassey were both assessed technical fouls.

Bassey, in an attempt to secure possession of the ball, swung elbows at SDSU junior forward Nolan Narain.

McDaniels, in defense of his teammate, confronted Bassey.

“I felt some type of way. He hit Nolan. I wasn’t having it. I had to tell him,” McDaniels said.

Senior guard Jeremy Hemsley opened up the season in the Aztecs’ starting lineup.

After starting all but one game his sophomore year, Hemsley started just seven times last season.

Dutcher said Hemsley looked rejuvenated as a starter out on the court.

“Jeremy just looks so comfortable and happy,” Dutcher said. “He’s having fun out there on the floor… that’s great to see as a coach.”

Within the first five minutes of the second half, Hemsley was on a fast break by himself and attempted a reverse dunk.

Luckily for Hemsley, he made the dunk.

“I was just really happy it went in, because I was going to be mad if he missed it,” Dutcher said.

The dunk was a part of an 8-0 run that gave the Aztecs their first double-digit lead and was big momentum shift in the game.

The run took under two minutes and ended at the 14:04 mark to drive the score up to 54-38. It included three-pointers from Watson and sophomore guard Jordan Schakel.