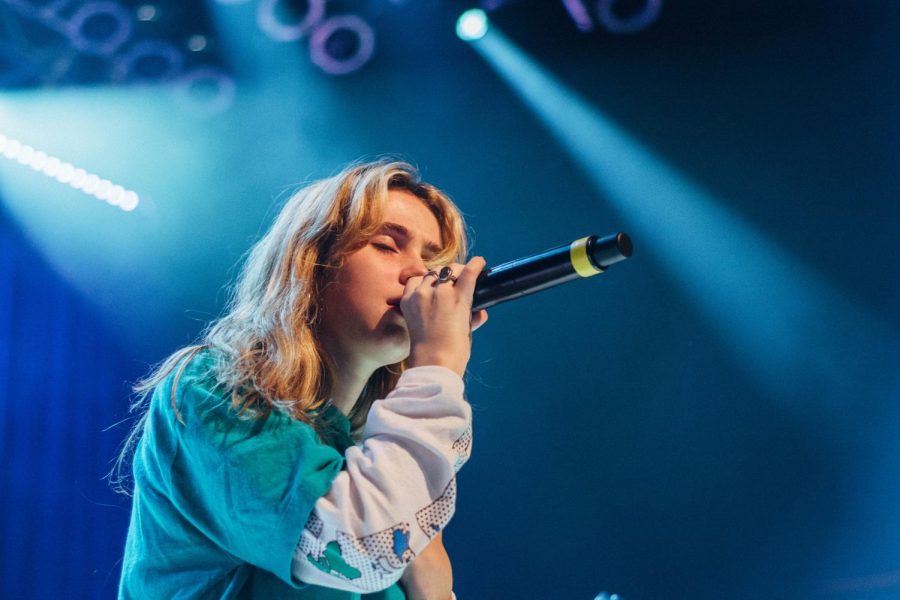 20-year-old pop progressivist Clairo stopped at San Diego’s House of Blues on Nov. 2, and a year and a half after becoming an online star, it was evident she’s still searching for her live voice outside of an internet platform.

Born Claire Cottrill, Clairo became a social media sensation in 2017 when her homemade video for the self-produced song “Pretty Girl” went absurdly viral — it currently stands at more than 23 million views on YouTube.

The video is incredibly simple, with Clairo mouthing along to the song into a webcam as the lyrics scroll by karaoke-style, but something about it is inexplicably endearing. It’s a soft, teenage daydream wrapped in a sheen of millennial pink — a relic of ‘80s keyboard synth-pop as much as it is a brand new offering of digital age bedroom pop and vaporwave.

But it wasn’t until her single “Flaming Hot Cheetos” started receiving similar attention, though not on quite as large a scale as “Pretty Girl,” that it was clear Clairo had curated a sound as original as it was a product of its time and platform. Over atmospheric, looped synths — almost twinkling like a passageway to Clairo’s stream of consciousness — she laments the “old days” and a lost lover.

Opening with the lyric, “Sometimes I feel like I just wanna go back to my old ways,” it’s funny to hear Clairo, 18 at the time of “Flaming Hot Cheetos’” release, long for the past, until reminded that on the internet, the distance between the “old days” and the present could be as small as a meme cycle ago.

She released her debut EP “Diary 001” earlier this year, and it captures Clairo at a transitional point in her career, hoping to keep the attention of her newfound audience while still hitting that niche, intimate, dream pop that sets her apart from other pop conceptualists.

For instance, she opened her set at the House of Blues with “B.O.M.D.” (an acronym for “boy of my dreams”), a cut from “Diary 001” produced by PC Music’s Danny L Harle. A fine song, but it hits an odd middle of the balance Clairo is striving for — losing the delicate grace of her earlier work, but not quite reaching the bold experimentalism of PC Music to be novel in a different way.

Still, “B.O.M.D.” does fare better live than her chilled out viral hits. It’s fun, easy to sing along to, and certainly seemed like a highlight to the young fans in the audience.

Her House of Blues performance was the biggest headlining show of her career so far, and the average age of concert-goers skewed young, to the point where there were several parental chaperones in attendance.

Yet to put a full-length release — something as traditional as an album seems unnecessary for a  forward-thinking artist like Clairo — she performed various singles going back to her YouTube and SoundCloud days, as well as recent collaborations and tracks from “Diary 001.”

After a string of “Diary 001” songs, 2017 single “Get With U” showed the opposite end of Clairo’s artistic spectrum compared to “B.O.M.D.” The recorded track showcases Clairo just above a whisper over muted, extremely lo-fi production and soft, stomping percussion. The lyrics are minimal because they’re secondary to the feeling they evoke from Clairo’s delivery.

Live, the song came off as a sort of call-and-response with the audience, shedding the heart-wrenching intimacy that comes with listening to the song through headphones.

Among her best performances of the night was “Drown,” a recent collaboration with fellow Generation Z producer Cuco. Slinky glitches accompanied Clairo’s hushed tone and a catchy bounce that translated effectively to a live audience.

“Flaming Hot Cheetos” followed, and it suffered similar faults as “Get With U.” However, she performed the song twice, the second time with minimal instrumentation so the audience could be heard singing along. This presented a unique way to create an intimate space for her music, with Clairo and her fans relating, as peers, to the shared experiences she evokes in her lyrics.

She closed the main set with “Better,” a collaboration with electronic producer SG Lewis. A fun, sweet song with disco-inspired elements that make it one of the more upbeat tracks in her catalog, but still allows her crisp, comforting voice to shine.

She encored with “Pretty Girl” and “Diary 001” standout “4Ever,” a triumphant ending outlining what she’s accomplished and where she could go next.

“Is it ever gonna change?” she sang in “4Ever,” an infectious, love-tinged song about fearing the unknown in a relationship. “Am I gonna feel this way forever? / Are you gonna be around for me to count on?”

A burgeoning young artist, it’s exciting Clairo is willing to toy with her sound and expand her network of collaborators so thoughtfully and openly. With all the time in the world to grow, she’s already mastered virality, perhaps now the greatest asset in pop, and has established a sound that doesn’t really need to be translated live to be great. A live show is a couple hours, but the internet is constant, and Clairo excels where it counts.