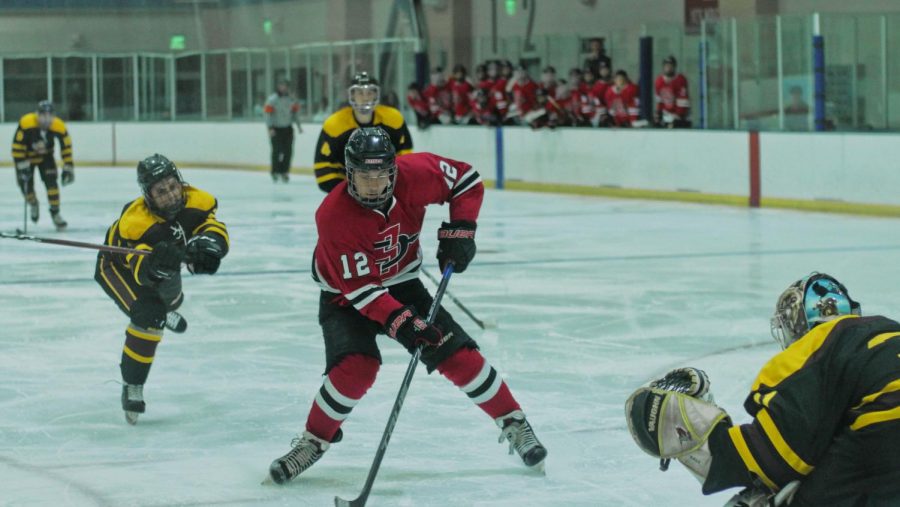 Forward Tristan Macalolooy races with the puck during the Aztecs 5-3 loss to the Sun Devils on Nov. 9 at the Joan Kroc Center.

San Diego State hockey narrowly lost to Arizona State University on Friday night, 5-3, in a game that went down to the wire.

The loss drops the Aztecs record to 5-4-1 and snaps a two game win streak.

“We had a lot of opportunities,” SDSU head coach Phil Bateman said. “You just gotta fight when they’re not going in easily, you gotta fight for a couple of those inches and be a little stronger on your stick, and heavy on the stick, and make sure you bare those down and finish them.”

The Aztecs started the first period strong, hitting the post just minutes in, but ASU was quick to respond with multiple shots of their own.

The Aztecs had a chance to capitalize on an ASU penalty, but during the powerplay, forward Derian Theberge committed a penalty to force a 4-on-4.

Both teams traded shots, and a huge save by goalie Austin Hathcoat kept the game scoreless with under a minute to go.

The start of the second period was more of the same with both teams trading shots.

ASU finally broke the deadlock with a power play goal midway through the period. Callum McRae committed the penalty to set up the power play for the Sun Devils, as he was called for a crosscheck.

The Aztecs rallied behind the efforts of left winger Aaron Mayer, who took a plethora of shots, finally finding the net to tie the game at one apiece.

Both teams flirted with goals early in the third period, but with around 13 minutes left, ASU struck twice within 16 seconds to make the score 3-1.

The Aztecs needed to rally quick, and center Devyn Taras responded with a rebound goal to get the team to within 3-2.

SDSU produced shot after shot, hitting the post twice, but ASU scored a goal with 7:55 to go to extend its lead to 4-2.

The game appeared out of reach for the Aztecs,  but a massive penalty on two of ASU’s players allowed forward Steven Plante to sneak a goal into the net on a 5-on-3 power play.

It looked for certain the Aztecs would find the net, but that would not be the case. A late penalty in the last few seconds by SDSU allowed the Sun Devils to score the final goal and complete the 5-3 victory.

“I thought in and around the net we were getting outworked a little bit,” Bateman said. “I do have to make a couple of adjustments, just to give us a bit more size up front, so you’ll see some lineup changes for tomorrow.”