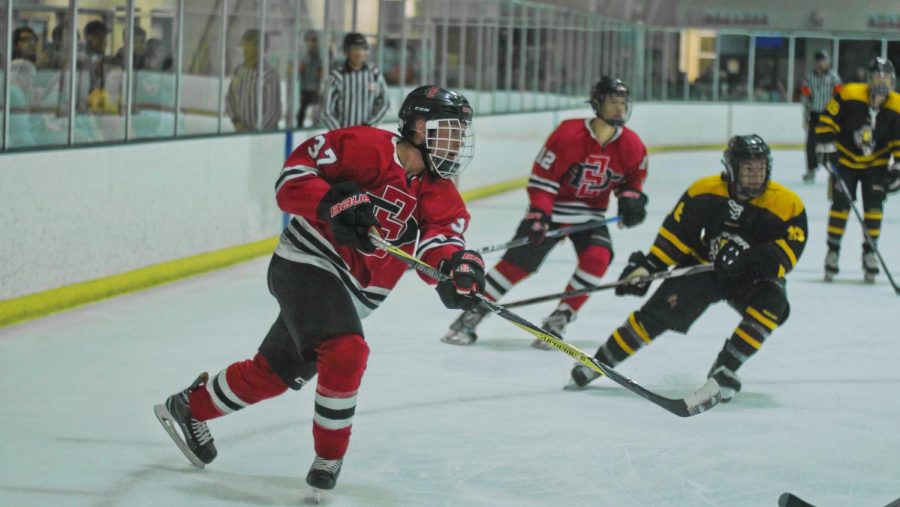 Zac Mencimer competes on the ice during the Aztecs 5-2 victory over Arizona State on Nov. 10 at the Joan Kroc Center.

San Diego State hockey got a dose of revenge against Arizona State University on Saturday night, defeating the Sun Devils, 5-2, in the second game of a two-day doubleheader.

The Aztecs lost 5-3 last night against ASU, but redeemed themselves in front of the home crowd at the Joan Kroc Center.

“It was really a mindset change tonight,” assistant coach Clark Oliver said. “I think they showed better quality as a team, they played more as a unit tonight. We’re just overall proud of the overall effort from the guys tonight.”

SDSU had a blazing start to the first period. Forward Derian Theberge scorched one into the net on a nifty pass by winger Aaron Mayer during the fourth minute of the game.

“I know we wanted it a lot more since we lost yesterday,” Theberge said. “We were playing a lot faster, working harder, and it was a lot better than yesterday.”

Later in the period, forward Elisha Reece found Theberge on the break and Theberge easily knocked the puck in making the score 2-0.

With ASU’s confidence dwindling away, Aaron Mayer scored a powerplay goal in the last minute of the period to make the score 3-0, finalizing a perfect start to the game for the Aztecs.

The second period also started well for the Aztecs. Elisha Reece found the back of the net in the sixth minute to give the Aztecs a commanding 4-0 lead.

Despite their big lead, the Aztecs could not capitalize on two power play opportunities in the second, and paid for it as ASU creeped back into the game with two goals.

With the game now 4-2, the Aztecs and ASU fought for control of the game in the third period, until winger Mason Cook snuck one past the net with three minutes to go thanks to a Devyn Taras assist.

“It feels good to set the homies up,” Taras said. “Everyone realized this morning that we were not playing our game yesterday, so coach told us to go out there hard and just be smart, and we did exactly that”