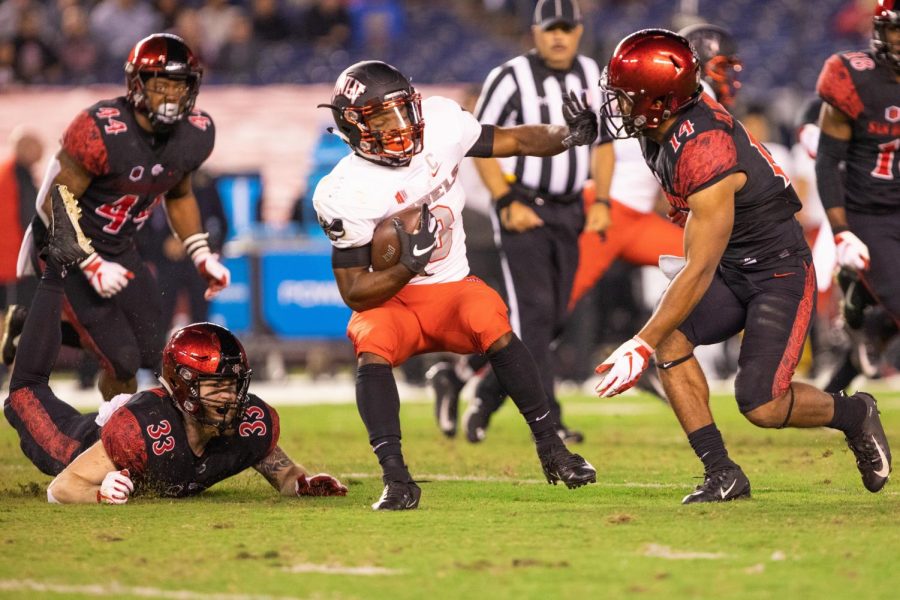 SDSU (7-3, 4-2 MW) saw its lead evaporate after two fourth-quarter Rebel touchdowns, before an interception thrown by junior quarterback Ryan Agnew with 1:23 left in the game sealed the fate of the Scarlet and Black.

Agnew finished with 187 yards and a touchdown but failed to lead the Aztecs to any points in the fourth quarter.

“They didn’t change anything defensively,” Agnew said. “They just wanted it more than we did.”

UNLV (3-7, 1-5 MW) completed its comeback after senior running back Lexington Thomas’ second touchdown run of the night, a 75-yard score with 1:53 left to play.

Senior defensive back Parker Baldwin said the defense suffered a let down with the Aztecs holding a big lead.

SDSU head coach Rocky Long made the switch from senior quarterback Christian Chapman to Agnew in the second quarter.

Going into the game, it was expected that the Aztecs would deploy a dual-quarterback system, but Chapman was never re-inserted following a second quarter 13-yard touchdown pass to sophomore wide receiver Tim Wilson Jr.

Chapman was 8 for 10 with 92 yards and a touchdown and an interception at the time of the quarterback change.

“At halftime, we decided (Agnew) was playing better than Christian, so he didn’t play the rest of the half,” Long said. “We thought he was moving the ball better because we weren’t controlling the line of scrimmage, so a mobile quarterback has a better chance to extend plays and make plays.”

Agnew had success through the air linking up with Wilson, who had a career night posting 123 yards on five catches and finishing with two touchdowns.

The Aztecs led 14-13 at halftime thanks to touchdowns from both air and ground. In addition to Chapman’s touchdown toss, junior running back Juwan Washington was able to take the ball in from four yards out with 33 seconds left to send the Aztecs into the break with the lead.

Washington finished with 66 yards on 21 carries, 56 coming in the second half after rushing for only 10 yards on 11 carries in the first.

SDSU was susceptible to long pass plays in the opening half, giving up completions of 77 and 46 yards, and found themselves trailing 13-7 after Thomas scored from two yards out in the second quarter.

UNLV jumped out to a hot start in the first, after sophomore quarterback Max Gilliam found junior wide receiver Darren Woods Jr. for a 77-yard completion, with SDSU sophomore warrior Tariq Thompson securing a touchdown-saving tackle on the play.

The Rebels would eventually settle for a field goal, one of two in the first quarter from senior kicker Evan Pantels.

The Aztecs struggled offensively in the first quarter, as their three drives resulted in two three-and-outs and the Chapman interception, while being held to six yards on the ground.

SDSU now heads to Fresno State next Saturday to take on the West-Division leading Bulldogs.