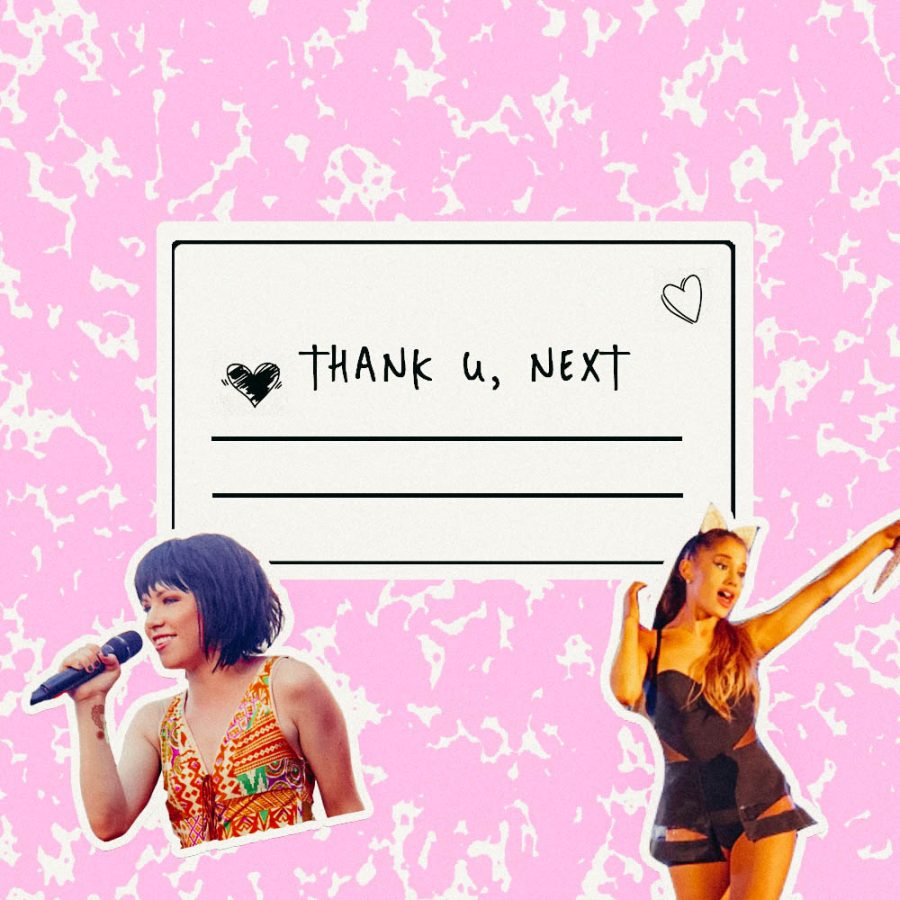 Thinking back on her illustrious career, it’s hard to believe she hadn’t topped the Billboard Hot 100 until now.

The Nicki Minaj-assisted stationary bike jam “Side to Side” peaked at no. 4, Iggy Azalea collab “Problem” topped out at no. 2 and “Sweetener” lead single “No Tears Left to Cry” debuted at no. 3 and never gained a spot.

What’s even more noteworthy is that among her sexiest singles and Max Martin-produced hits, her first no. 1 is the most personal track in her catalog.

“Thank U, Next” surprise dropped Nov. 3, 30 minutes before Grande’s much-publicized ex Pete Davidson was to take the stage as a cast member on “Saturday Night Live,” and in it, she namechecks her exes: rapper Big Sean, dancer Ricky Alvarez, late musician Mac Miller and, yes, Davidson.

“Thought I’d end up with Sean, but he wasn’t a match,” Grande croons to open the song. “Wrote some songs about Ricky, now I listen and laugh / Even almost got married, and for Pete I’m so thankful / Wish I could say thank you to Malcolm, ‘cause he was an angel.”

After a media field-year of Grande and Davidson photo ops, with matching tattoos, an alarmingly fast engagement and a song literally called “Pete Davidson” on Grande’s recent album in between, the two reportedly broke it off in mid-October.

In the short time between reports of their break up and the release of “Thank U, Next,” it seemed there was some unresolved bad blood between the two: he joked about their split in an “SNL” promo, which apparently prompted Grande to tweet (then delete), “for somebody who claims to hate relevancy u sure love clinging to it huh [sic].”

All of this is important because “Thank U, Next” is a song that’s as much context as it is substance. Watching Grande’s glow of new love, culminating in a joyous, excellent album “Sweetener,” only for it to end in social media spats is concerning, especially for her legion of fans. Not to mention her ex, Miller, died of an overdose in September, which she partially received unjust blame for, and it’s only been a year and a half since her Manchester concert was the site of a suicide bombing — she has every right to be heartbroken.

The second verse has Grande singing of a new love, saying that she “met someone else,” until she reveals who it is she’s describing.

“I know they say I move on too fast, but this one gon’ last,” she sings of her new love. “‘Cause her name is Ari, and I’m so good with that.”

It’s profound and moving that after everything Grande’s been through over the past couple of years, or even weeks, that it’s led her to learn and love new things about herself.

And the song itself is a reminder that, even at the top of her career, self love is necessary and pain isn’t avoidable.

Two days before “Thank U, Next” dropped, Canadian pop outsider Carly Rae Jepsen released “Party for One,” her first single since non-album track “Cut to the Feeling” came out in summer 2017.

Jepsen is about as opposite of Grande as it gets.

Since her 2012 inescapable smash “Call Me Maybe,” like her peers Charli XCX, Tove Lo and Tinashe who tasted chart-topping success before taking an artistic and commercial career turn, she’s transformed into a source of worship for online pop devotees.

Jepsen’s 2015 record “Emotion” was a critical favorite and is already a cult classic, even though it underperformed commercially.

Failing to recreate the ubiquity of “Call Me Maybe,” but finding different kinds of success, has left Jepsen at a weird crossroads in her career. She said on Instagram Live the night “Party for One” dropped that the song was “three years in the making,” before correcting herself, clarifying that it was not the song that took three years to make, but the “process of getting this song out.”

Though she didn’t explicitly say her label or any kind of mismanagement was to blame for this delay, it certainly wouldn’t be surprising for such an artist — Charli XCX recorded an entire follow-up album to 2014’s “Sucker” which was scrapped due to leaks and label disagreements, and she’s just dropped EPs, singles and mixtapes in the meantime. Jepsen has yet to follow up “Emotion” with a full-length release, having only put out an EP of “Emotion” B-sides, a single and a couple features since then.

Jepsen, a charming romantic whose biggest asset is her music’s simultaneous relatable personality and exhilarating peaks, putting out “Party for One” amongst all this speculation isn’t as important as the context of “Thank U, Next,” but it is important for establishing the spectrum of necessary female self-empowerment.

“Party for One” takes place after a vague break up with a vague ex, and like the specified exes in “Thank U, Next,” he doesn’t really matter, but understanding Jepsen’s position in her career adds another layer to the lyrics.

“You don’t want my love / If you don’t care about me / I’ll just dance with myself / Back on my beat,” Jepsen celebrates on the track.

There’s not a tangible sonic step forward from Jepsen’s previous work on “Party for One” because there doesn’t need to be — it just sounds like her. It’s an ode to having fun with yourself, taking a break from all the pressure in the world to just enjoy the person you are.

Hearing Jepsen, who often sings of crushes and heartache, basking in her own self-worth is inspiring and crucial for many female listeners.

On the surface, it’s easy to lump “Thank U, Next” and “Party for One” together as variations of the same song, but those degrees of difference are notable for how they portray different kinds of self love, for women by women, and both equally necessary.

These songs are especially significant considering a couple of the biggest hits of 2018 have been female empowerment anthems by men.

It’s fitting that the song “Thank U, Next” knocked off the top of the Billboard Hot 100 is Maroon 5’s “Girls Like You,” a boring song marketed as some sort of blanket empowerment anthem — its video cycles through a collection of famous women — though the lyrics don’t convey much of anything besides Adam Levine declaring, “I need a girl like you,” whoever that is.

Drake’s “Nice for What,” which topped the Hot 100 for eight weeks this year, is a legitimately great song, and though it also has a music video featuring a collection of famous women, it’s clear more thought was put into who would be featured in the clip. Plus, it’s directed by a woman, unlike the video for “Girls Like You.”

But Drake himself isn’t always exemplary of feminist allyship. On one of the Los Angeles stops on his recent tour, he brought noted abuser Chris Brown on stage to perform with him, and at a recent party, he dressed up as rapper Fabolous, who was arrested for domestic violence earlier this year.

That’s not to say Grande and Jepsen always are or always will be perfect examples, but providing women the space to mess up or feel pain and reckon with it in their art is more powerful than men offering uncomplicated views of womanhood, which they then unknowingly — but predictably — make problematic by simplifying women to one unified experience or by failing to address their own inconsistencies.

Female self-love exists on an infinite spectrum, and Grande and Jepsen exhibit its nuances as women at differing points in their lives and careers, loving themselves for different reasons. In a time when women can feel really hopeless, it’s songs like these that can provide a sense of belonging with yourself.