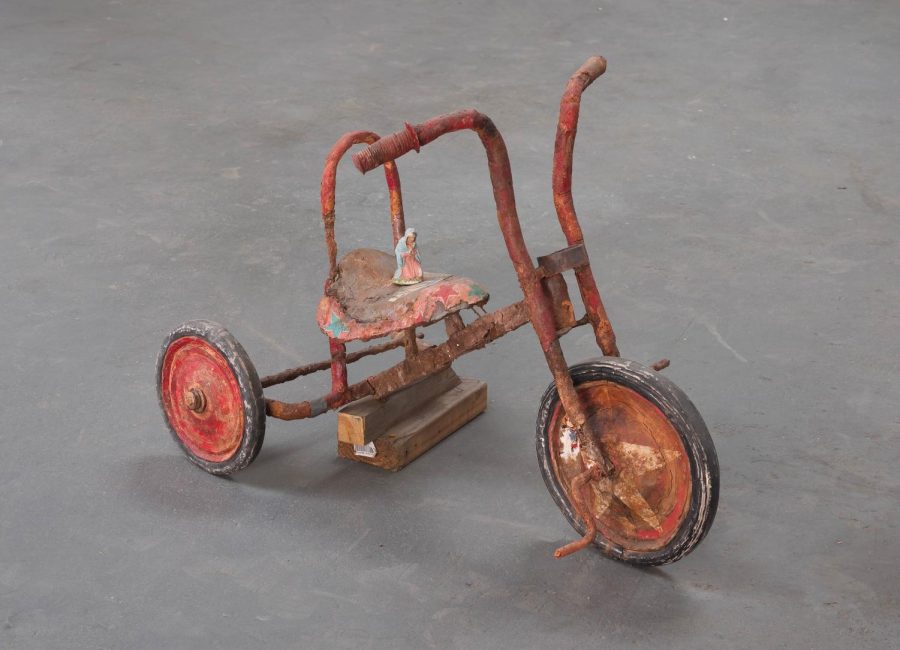 San Diego State’s School of Art and Design has launched a new art exhibit, “I Love to Ride My Bicycle,” at the SDSU Downtown Gallery.

Showcasing art centered around a bicycle theme, the gallery exhibit opened with a reception on Nov. 15.

“Overall, it looks at how the bicycle, as an object and a technological advancement at the time that it was created, has inspired artists,” Downtown Gallery Director Chantel Paul said. “In this show, (it’s) focusing on contemporary inspiration and artists that are working today.”

The show features 12 artists and 17 individual pieces of art, and SDSU alumnus Peter Scheidt performed with his piece during the opening reception.

Initially inspired by the many modes of transportation present near the gallery, Senior Curator Tina Yapelli said the nearby cruise ship docks, trolley stops and Amtrak stations helped to spark the idea for the exhibit.

“The gallery has a very unique location in terms of being in a transportation hub,” Yapelli said. “I was very interested in that aspect of the gallery’s location and wanted to do an exhibition about modes of transportation.”

In searching for pieces to include in the exhibit, Yapelli said she found many works of art with bikes in them. In addition to that, she focused in the concept on that theme because bicycles are a part of the city’s plan to become more sustainable.

“As I began to do some research I found a lot of artists who were working with bicycles,” Yapelli said. “Of course, that’s its own mode of transportation, and one that’s becoming more and more important in terms of livable cities, sustainability, and creating pedestrian-friendly and walkable downtown areas.”

Since sustainability is a widely-discussed topic, Paul said art can be one vehicle to talk about alternative, environmentally-friendly transportation modes.

“I think (the exhibit) is timely for a number of reasons, and also accessible,” Paul said. “The theme being the object of the bicycle itself is relatable to audiences of different ages, and in terms of the time that we’re in right now, socially with environmentalism and the bicycle being a zero-carbon footprint type of vehicle.

“Coupled with San Diego’s own plan with a move toward zero-emissions, I think it definitely increases the relevance of the subject matter of the show,” Paul said.

The art of two SDSU alumni — Scheidt and Jason Sherry — will be featured in the gallery exhibit. Scheidt will also be giving a guest lecture on Nov. 20 in SSW-1500 as part of the “Artists and Designers in Real Time” series that is open to the public.

Other artists with art displayed in the exhibit come from a variety of locations, ranging from San Diego (such as Roman de Salvo) to Vietnam. Despite purveying a serious message through the art in the exhibit, Yapelli said the theme of the show siphons back to the happiness that cyclists often feel when riding.