Football heads to Fresno to take on Bulldogs in conference clash 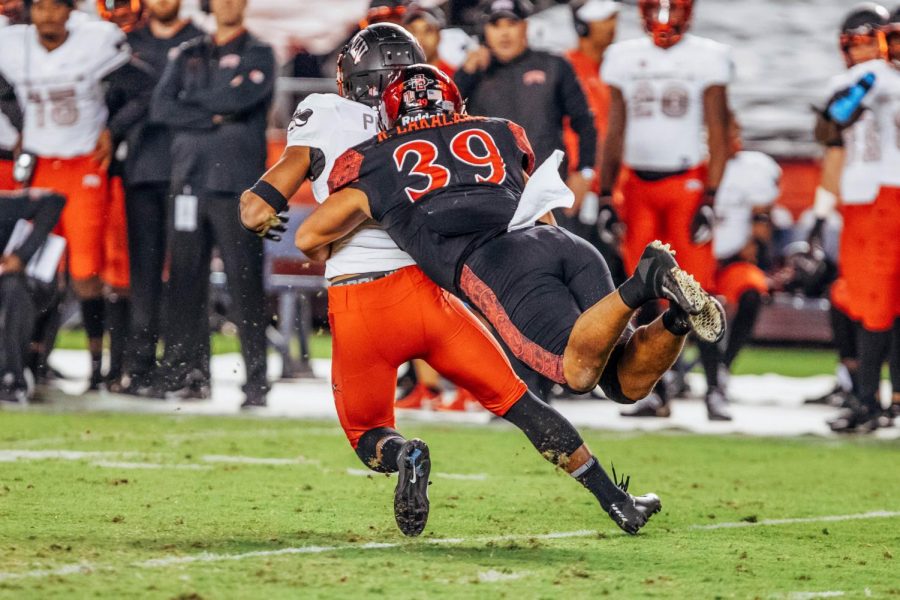 Senior linebacker Ronley Lakalaka dives to tackle UNLV quarterback Max Gilliam during the Aztecs 27-24 loss to the Rebels on Nov. 10 at SDCCU Stadium.

San Diego State football will face off on the road against Mountain West rival Fresno State on Nov. 17.

The Aztecs defeated No. 24 Broncos 19-13 on the blue turf of Albertsons Stadium on Oct. 6.

Although Fresno State was unable to defeat the Broncos, head coach Rocky Long said he thinks the Bulldogs are the best team in the Mountain West Conference.

“If you look at them both on offense, defense and special teams, they’re the most veteran team in our league and they’re probably the best football team in our league,” Long said. “And so it’s quite a challenge.”

The Bulldogs have averaged 38.1 points per game this season.

“Like any team who has got an 8-2 record, they’ve got good football players,” Arnett said. “They got them playing hard and at a very high level.”

Long said although the Aztecs have dealt with an extensive amount of adversity this season, there have been positive takeaways.

“We can discuss the expectation level, the disappointment and all you want to talk about,” Long said. “But in reality, there are reasons that we are an inconsistent football team, a struggling football team and guess what, we’re bowl eligible and we have a winning record.”

SDSU was without senior quarterback Christian Chapman for six games following a knee injury suffered against Sacramento State on Sept. 8.

The Aztecs also missed junior running back Juwan Washington and junior fullback Isaac Lessard for four games due to injury.

Long said the team has overachieved considering the amount of injuries and young athletes the Aztecs are playing with.

Long said that due to youth, he does not know his team well, but he did predict another close game against Fresno State.

“I’m not sure I know them very well at all. I think when you got a bunch of youngsters in your program, you’re feeling your way, too,” Long said. “They will play hard this week and they will compete, so I think it’ll be another close game.”

“Our young teammates coming in and stepping in for those big games has really helped a lot. We really put a lot of weight on their shoulders to come in and make plays,” Dixon said. “Because when it’s their time to step up, we need them to step up. That’s what helped us win.”

SDSU has only rushed for 166.1 yards per game so far this season, ranking 70th in the country.

Long said the offensive line has not met the team’s standards this season.

SDSU quarterbacks have been sacked 27 times for 193 yards this season.

Dixon said one reason the offensive line has struggled is due to complacency.

“Probably we just got level-headed, honestly. We thought since we had such a good year last season, it would just be a walk in the park this year,” Dixon said. “I’m not saying it’s over, but we’re still going to try and get better every week from now on.”

In the Aztecs’ most recent game against UNLV, Chapman made his first start since Sept. 8 and threw 8-for-10 for 92 yards.

Junior quarterback Ryan Agnew entered the game in the second quarter and played the rest of the way, passing 14-for-26 for 187 yards.

Both quarterbacks finished the game with one passing touchdown and one interception.

Long said Chapman will start against Fresno State, but Agnew is guaranteed some playing time in the first half.

“Christian (Chapman) is starting at quarterback. Chap’s our starting quarterback, but Ryan (Agnew) will get a couple of series in the first half and then our coaches will decide who gives us the best chance to win.”