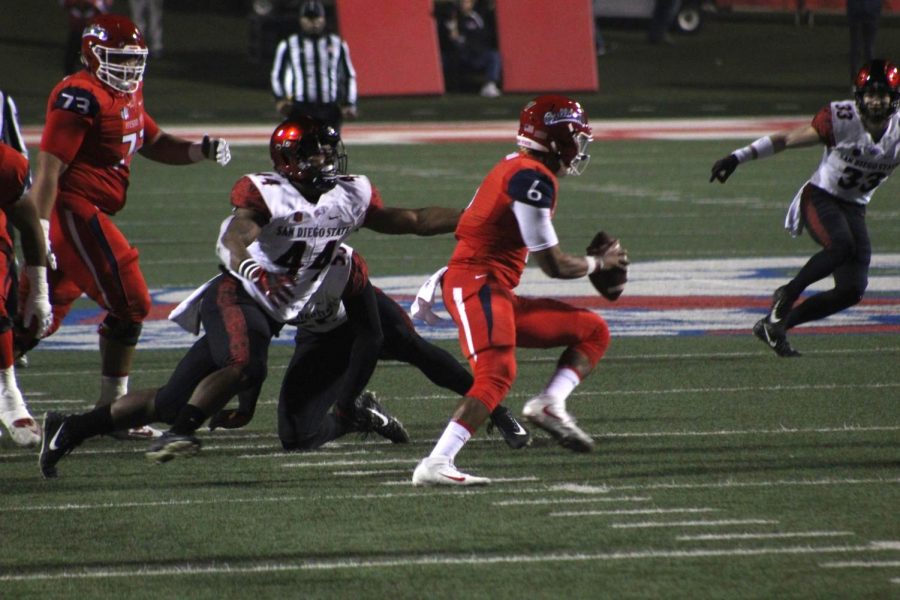 The loss is the third in conference for the Aztecs, statistically eliminating them from any chance for a spot in the MW title game.

“I said we’d be very disappointed if we did not compete for the conference championship,” head coach Rocky Long said. “We competed all the way up until the game right before the last game of the year.”

Rocky Long responds to question about conference title out of the picture following Fresno State loss.

Ends with “let’s get off of this crap.” pic.twitter.com/h2Q5AJvui6

Even with a win, the Aztecs (7-4, 4-3 MW) would have needed help. A loss to UNLV this past weekend meant Nevada needed to lose its final game of the season against the Rebels for SDSU to have any opportunity to compete for the championship.

Alternatively, the win clinched the division for the Bulldogs (9-2, 6-1 MW), who will represent the West in the MWC championship game for a second straight year.

The Aztecs went into halftime with a 14-10 lead, but were held to 56 total yards and shut out in the second half, while the Bulldogs seized momentum with 13 unanswered points.

Senior wide receiver Fred Trevillion had a career night for the Aztecs offense, posting 179 receiving yards while accounting for both SDSU touchdowns, but was shutout in the second half.

Trevillion said the offense came out flat out of the break.

“I’m not really sure what changed, but I feel like we lost the excitement we had,” he said. “We were kind of more mean coming out in the first half.”

Long made the switch from Chapman to Agnew in the second quarter.

“I thought (Agnew and Chapman) were very inconsistent, and obviously, we still had a difficult time running the ball,” Long said.

Senior running back Juwan Washington was held to only 38 yards on 18 carries, part of a 64-yard effort for the Aztecs’ run game, which averaged only 2.4 yards-per-carry.

The last two weeks Chapman has received the starting nod, but has been pulled in the second quarter in favor of Agnew.

Chapman played the entirety of the third quarter, after not playing in the second half last week,  but was replaced by Agnew at the beginning of the fourth.

Fresno senior quarterback Marcus McMaryion (17-for-24 for 267 yards and a touchdown) had quick success through the air, connecting with senior receiver Jamire Jordan for an 86-yard touchdown on the Bulldogs opening drive.

The play came after the Aztecs were whistled for an offsides penalty, and the mistake was compounded after freshman cornerback Darren Hall fell, leaving Jordan wide open down the field.

Jordan finished the game with 94 yards on two catches, but was ultimately overshadowed in the reception category by senior wide receiver KeeSean Johnson, who finished with 10 catches for 141 yards.

“We didn’t stop them from making big plays, and that’s in the end what cost us the game,” senior defensive back Parker Baldwin said.

SDSU was helped out in the fourth quarter after a Fresno holding call negated a 30-yard rushing touchdown by sophomore running back Ronnie Rivers, but the Bulldogs converted a 36-yard pass on third down to get to the goalline.

The Aztecs left six points on the field, after failing to convert a fourth down in the first half and missing a field goal in the third quarter.

Senior kicker John Baron II missed a 47-yard field goal with 2:16 left in the third quarter, keeping the score 17-14 in the Bulldogs favor.

SDSU finishes its regular season next Saturday at home against the University of Hawaii.