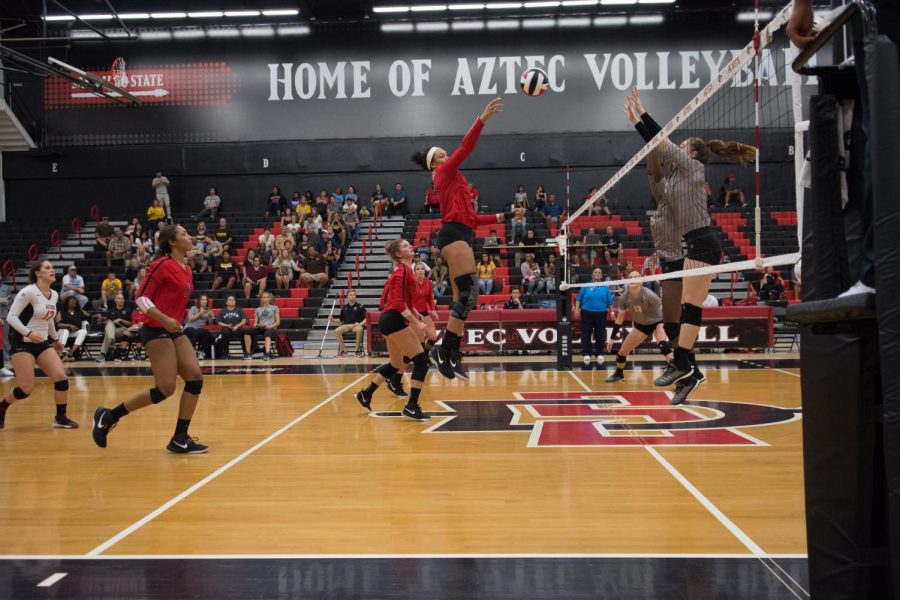 Senior middle blocker Deja Harris attempts to hit the ball over a Wyoming defender on Sept. 29 at Peterson Gym.

“I’ve been here for five years, so there’s obviously a lot of emotion attached to it. There’s been a lot of blood, sweat, and tears,” Harris said, who led the way with 16 kills for the Aztecs and eight  total blocks, including six block assists.

“That’s crazy and exciting (to become the program leader),” she said. “I wouldn’t have been able to do it without my coaches… and my teammates.”

The Scarlet and Black came into today looking to finish the season winning three consecutive games and a .500 conference record.

“(Our team) wanted to win. I think our play showed that we wanted to win. We didn’t quit, we didn’t play down, we didn’t not show up…and that’s all I can ask for,” Collins-Parker said. “Looking at stats, we did a lot of things really, really well.”

A crowd of 564 was on hand at Peterson Gym to see the Aztecs play their final game of the season.

Harris knew that this was a crowd this team has not seen in a while.

In the first set, the Spartans would start the game going on a 6-0 run, but the comeback mentality of the Aztecs began to prevail. A 21-12 run would lead to a Spartan timeout. The Aztecs’ momentum would continue after the timeout and lead to winning the set, 25-20.

“A lot of technical stuff like moving on feet on pass(es)…and we needed to up our game (when being down 6-0),” junior middle blocker Tamia Reeves said, who had 12 kills and added six block assists.

In the fifth and final set of the season, the Spartans had the mindset of getting two points for every Aztecs’ one. A comeback was on the mind to finish the season. Unfortunately, that dream would not become reality.

SJSU junior outside hitter Caitlin Bettenay led the way for the Spartans by recording 10 kills and 14 digs.

Looking to ahead to 2019, the Aztecs will return 19 players, including five seniors.

Collins-Parker said the team hadn’t been consistently healthy all year.

Reeves understands, as a middle blocker, that it will be tough to follow Harris’ footsteps for next season.

Earlier in the week, the Aztecs signed outside hitter Nya Blair, an incoming freshman next season. With the addition, the Aztecs will have 20 for next season. They will use the returning players as a way to prep and get better for next year.

“Offseason and preseason (for next year) is going to be a lot of nitty gritty stuff. We’re going to have a lot of technical mind practices, like ball control because that is something we lacked in our passing and blocking,” said Reeves.