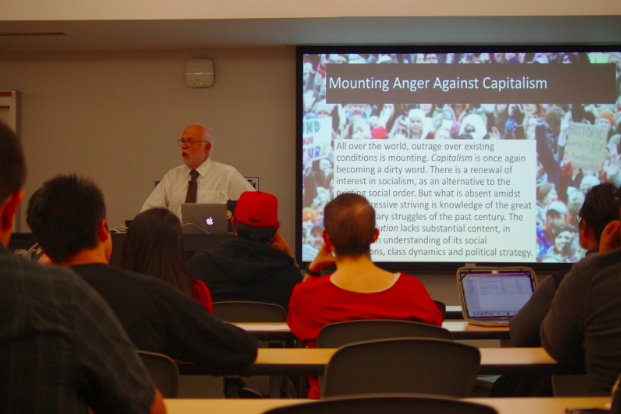 The International Youth and Students for Social Equality held an event at SDSU on Nov. 15 to discuss what they perceive as a class struggle and the possibilities of socialism in the 21st century.

Socialism has been a growing ideology within the American political realm, especially following Bernie Sanders’ 2016 presidential campaign that threw the notion of Democratic socialism into the political mainstream.

The IYSSE openly searches for alternatives to capitalism as a growing number of students have become discontent with the inequalities they believe to stem from it.

Socialist Equality Party chairman David North, who was a speaker at the event, said he is an advocate for the revolutionary transformation of a world economy through the implementation of a socialist government and emphasized the vital role that the working class plays in achieving that change.

He further explained its very nature has an objective interest in the overthrow of the existing system America is currently in. He said he believes, if the working class was in power, “forms of inequality and exploitation that exist would be abolished.”

North’s ideal of the working class in power entails a system that empowers them and removes the profit motive employed under a capitalist structure.

“The working class would abolish forms of exploitation, establish popular universal control of the productive forces and rebuild society on a socialistic basis,” North said.

Following the end of the Cold War, critics often stated Western Democracy and capitalism were the final forms of government. North openly opposed that notion in that the popularity of socialism has naturally emerged as a result of massive dissatisfaction towards capitalism.

North connected a significant cause of social distress to the unequal income distribution in America.

“The top 1 percent has captured 35 percent of wealth,” North said in reference to a chart displaying income distribution in America. “How can this inequality be addressed except through a profound change in the entire economic structure of society?”

Anthony Delgado, a mechanical engineering senior and member of the IYSSE, said it was figures like Bernie Sanders that inspired him to join the club.

“I joined in 2015,” Delgado said. “I used to be a big Bernie Sanders supporter and so I was looking for political groups on campus – you know, left-wing groups – and then I found this one.”

Renae Santa Cruz, graduate student at SDSU and member of the IYSSE, said concepts like those shared at during the lecture are important to keep in mind considering our current political climate.

“The significance of recognizing moments in history and how they relate to today … I think that’s immensely important to understand,” she said. “Especially when understanding a figure like Trump.”

She also said there is significance not only in understanding socialism but also actively working to advance it.