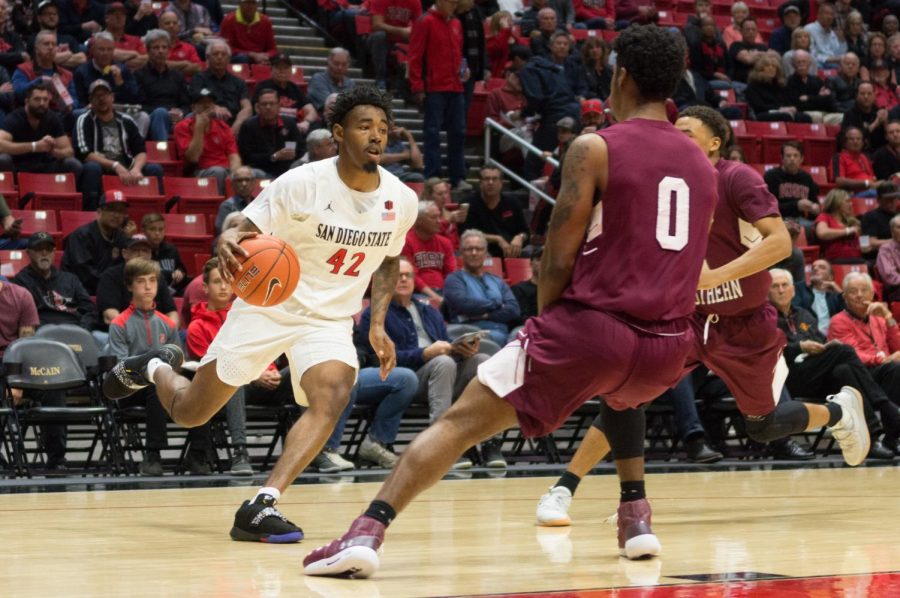 Jeremy Hemsley controls the ball during the Aztecs 103-64 victory over Texas Southern on Nov. 14 at Viejas Arena.

The first 10 minutes of San Diego State men’s basketball against Xavier University was starting to look like deja vu.

SDSU, fresh off a 26-point loss to No. 1 Duke University on Monday, trailed the Musketeers by 19 points in the teams Maui Invitational consolation bracket game in Maui, Hawaii on Tuesday morning.

The game appeared to be unraveling for the Aztecs after a travel violation by sophomore forward Jalen McDaniels was followed by a three-pointer from graduate guard Kyle Castlin, giving Xavier a 32-13 lead with 9:21 to go before the break.

As a second straight Hawaiian island blowout stared the Aztecs in the face, the team finally clicked, and proceeded to go on a 27-8 run for the rest of the half, cutting its deficit to 40-37.

The finish for the Aztecs (3-1), as they say on the big island, was not oluolu.

Xavier (2-3), which had missed its first nine three-point attempts in the second half, had one finally go in after a deep shot by junior guard Quentin Goodin cut the SDSU lead to 64-63 with 3:02 to play.

Goodin finished with 20 points and three assists to lead the Musketeers in scoring.

Xavier had been lights out from behind-the-arc to start the contest, making four of their first five attempts, but went just 4-for-20 for the remainder of the game.

The Aztecs responded to the threat with a layup by sophomore forward Nolan Narain and a McDaniels three, which was helped out by a friendly rim bounce, extending SDSU’s lead back to six with 1:10 to play.

McDaniels, who had sixteen points in the first half, scored a career-high 26 points to lead all players, and finished with eight rebounds and three blocks.

Senior guard Devin Watson also crossed the 20-point threshold for the Aztecs, finishing with 21 points and seven assists, while dropping in four three pointers (on 11 attempts).

SDSU traded baskets for free throws as the game neared its end, but the Musketeers never got closer than within four.

Next up for the Aztecs is a Wednesday matchup between the winner of Iowa State and Illinois, before the team heads back to the mainland for a game between Jackson State on Nov. 27.