Column: Offensive line play must improve as season wraps up 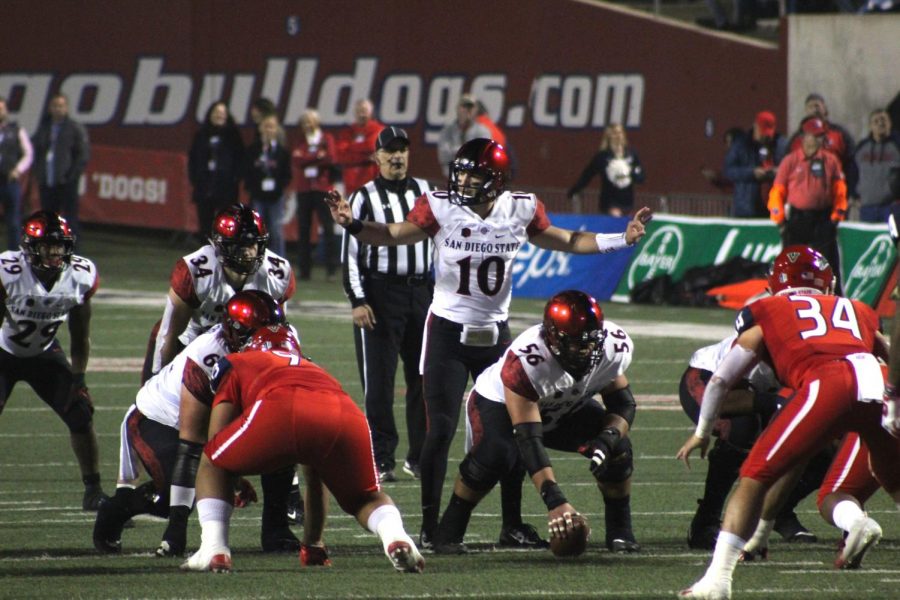 Senior quarterback Christian Chapman prepares for the snap during the Aztecs' 23-14 loss to Fresno State on Nov. 17 at Bulldog Stadium.

San Diego State football was unable to keep its title hopes alive after losing to Fresno State by a score of 23-14.

The Aztecs (7-4, 4-3) were shutout offensively in the second half for the third time this season.

The loss against Fresno also marked the second game in the row the Aztecs were unable to score in the second half.

In the second half of games vs. then-No. 13 Stanford and Eastern Michigan, SDSU was only able to score three points.

The inability to move the ball offensively is a byproduct of poor offensive line play.

SDSU junior running back Juwan Washington, who is the lead back in an offense that prides itself on the run, rushed for a mere 38 yards on 18 attempts against Fresno State, collecting 2.1 yards per rush.

Head coach Rocky Long said the offensive line was unable to get the job done.

“We’re not playing very well at the line of scrimmage, and that includes tight ends, running backs, and fullbacks blocking,” Long said. “We’re not blocking well enough for the run.”

The offensive line has, however, struggled with injuries throughout the season.

In the contest against Fresno State, the Aztecs were without three of their usual starters.

At the left tackle position, sophomore Tyler Roemer was suspended indefinitely by the team for an undisclosed violation. Sophomore lineman Kyle Spalding filled the void in his first start.

Right tackle Ryan Pope, who has been dealing with a knee injury, was moved to left tackle.

Sophomore center Dominic Gudino started, but has been in and out of the lineup with injuries this season.

Senior wide receiver Fred Trevillion said he was proud of the starters on the offensive line against Fresno State.

“Those guys that were out there, they still gave their all,” Trevillion said.

Although the Aztecs’ offensive line is ailing, they have still underperformed.

Sixty-four total rushing yards with a 2.4 yards per carry average simply is not good enough, especially when playing against a top team like Fresno State.

The next man up should be expected to perform as well as a starter, but the Aztecs have fallen short of said expectations time and time again this season.

The Aztecs’ failure to win their 22nd conference championship is disappointing, but that reality needs to be left behind.

The focus now turns to SDSU’s Nov. 24 contest vs. Hawai’i. This matchup gives the Aztecs’ offensive line one last chance to improve before a potential bowl game.