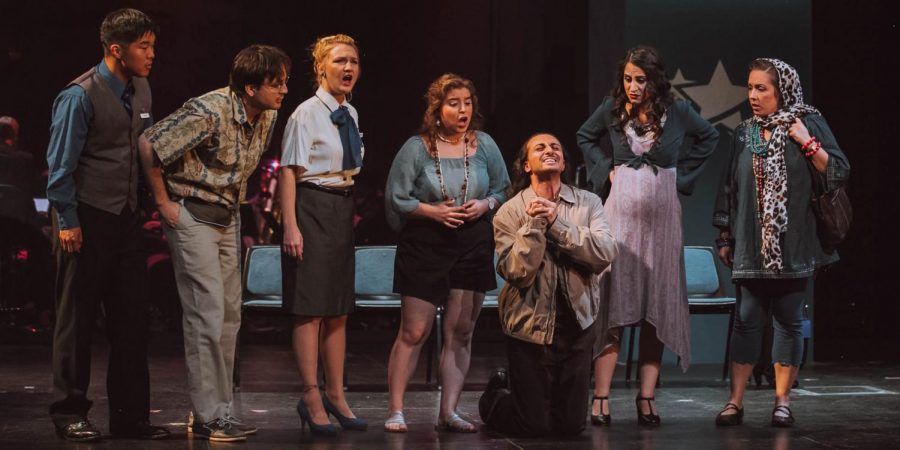 When it comes to opera, performers have the chance to show their talents through a combination of theatre and music.

“Flight” is a contemporary opera composed by Jonathan Dove, an English composer of opera and orchestral and chamber music. The opera is written by April De Angelis, an English dramatist who has written many plays and several libretti for operas.

Performed in English, the opera portrays the life of an Iranian refugee living in an airport and seeks help from travelers while being delayed at the terminal. The ensemble cast of the opera is composed of various characters each having their own story.

“Flight” deals with many current issues under the themes of love, lust and companionship. With its dramatic and comedic moments, this opera provided fun for anyone in the audience and included many unexpected jokes.

“There is no real specific message to the piece,” Alan Hicks said. “It is about each individual group’s issues and how they feel at the end of it.”

Along with its plot, the opera also required a lot of practice and dedication, since it was musically challenging.

“When I first looked as the score, I kind of freaked out,” said senior voice major Elizabeth Figueroa, who played the role of Tina, a woman traveling with her husband who are going on vacation. “I spent a lot of time in the practice.”

She said that she enjoyed being a part of the production and was happy with the outcome on the premiere night.

Graduate student Joshua Read, who played the role of the Minskman, a diplomat who is moving to a new city to start a life with his wife and soon child, described the opera as a learning process, both musically and theatrically.

“The first step is learning all your music,” Read said. “I then look at the text and that gives you a good idea of my character’s role.”

Both Figueroa and Read played roles of significant others to fellow actors. They said they enjoyed working with others in order to learn together.

“It is easier when you are working together because you get to interact with each other and learn from each other,” Figueroa said.

Read agreed that the collaborative element of the opera was rewarding.

“It is really fun to perform with other people,” Joshua said “ You are really able to get inspiration from them, which makes the scene much more dynamic.”

Alan Hicks, director of Opera Theatre at SDSU, said it was a challenging piece but he was able to see the improvements in the performers while producing the opera. He saw that they learned best when they were truly enjoying the performance.

“I loved seeing the growth of the students from the beginning of the production to the end,” Hicks said. ”There was one moment in a rehearsal where I started to see them have fun, which was when we first went into the theater.”

The opera required a wide range of musical ability for performers due to its difficult rhythms and vocals. However, SDSU performers carried out a wonderful performance on the night of the premiere, singing beautiful arias and recitatives that engaged the audience’s eyes and ears.