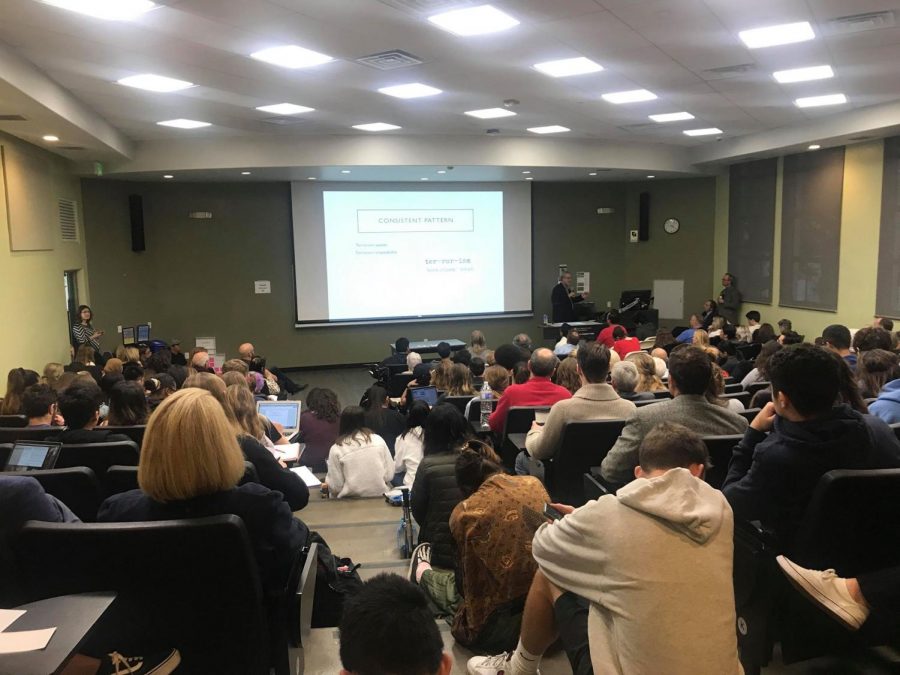 The Nov. 28 "Three Perspectives on Pittsburgh" event attracted so many attendees that it had to be relocated from its initial location directly prior to its start.

Three distinguished San Diego State professors gathered on Nov. 28 to analyze the history of anti-Semitism and its connection to the recent shooting at a Pittsburgh synagogue, a topic that generated so much interest that the event had to be relocated to fit the number of attendees.

The program, titled “Three Perspectives on Pittsburgh,” sought to enlighten the public’s understanding of modern anti-Semitism, something the speakers said could help to prevent future attacks similar to what happened in Pittsburgh.

History professor Laurie Baron examined the history of anti-Semitism and how it was brought over to the U.S. in his lecture titled, “From the Protocols to Pittsburgh: The Contemporization of Anti-Semitic Conspiracy Theories.” She said the years leading up to World War I changed the perceptions of Jewish people, who were already viewed negatively by many ethnic groups. After WWI, these views were further enforced by the American public.

“From 1880 to 1920, two million Jews came to the United States, which changed the nature of this country,” Baron said. “After WWI, American isolationism brought about a fear of ‘others’.”

Baron said many Americans feared immigrants as they were not seen as “fitting in” with the majority of Americans. With many Americans at the time being Anglo-Saxon Protestants, she said there was widespread concern that immigrants would turn the U.S. un-American.

Religious studies professor and rabbi Scott Meltzer spoke about this idea as well in his lecture, “Coming to America: Jews as Immigrants and Advocates.” He said legislation such as the Emergency Quota Act of 1921, which restricted immigration to the U.S., was a product of Americans’ fear of foreigners.

“America wasn’t going to look like what a group of predominantly white protestants thought America should look like, so they started to postpone us,” Meltzer said. “(The immigration of Jewish people) changes America from being this white, Anglo-Saxon, Protestant country.”

English professor Peter Herman, who was the last professor in the panel, said Americans have a general unwillingness to label white, right-wing domestic acts of terror as terrorism. Herman said authorities framed the Pittsburgh attack as a hate crime instead of domestic terrorism, a decision likely rooted in the fact that the perpetrator was a white nationalist who did not fit the American perception of a terrorist.

One graph Herman showed, created by the Washington Post, illustrated there have been more terrorist attacks related to right-wing extremism than Islamic extremism in the United States over the last year.