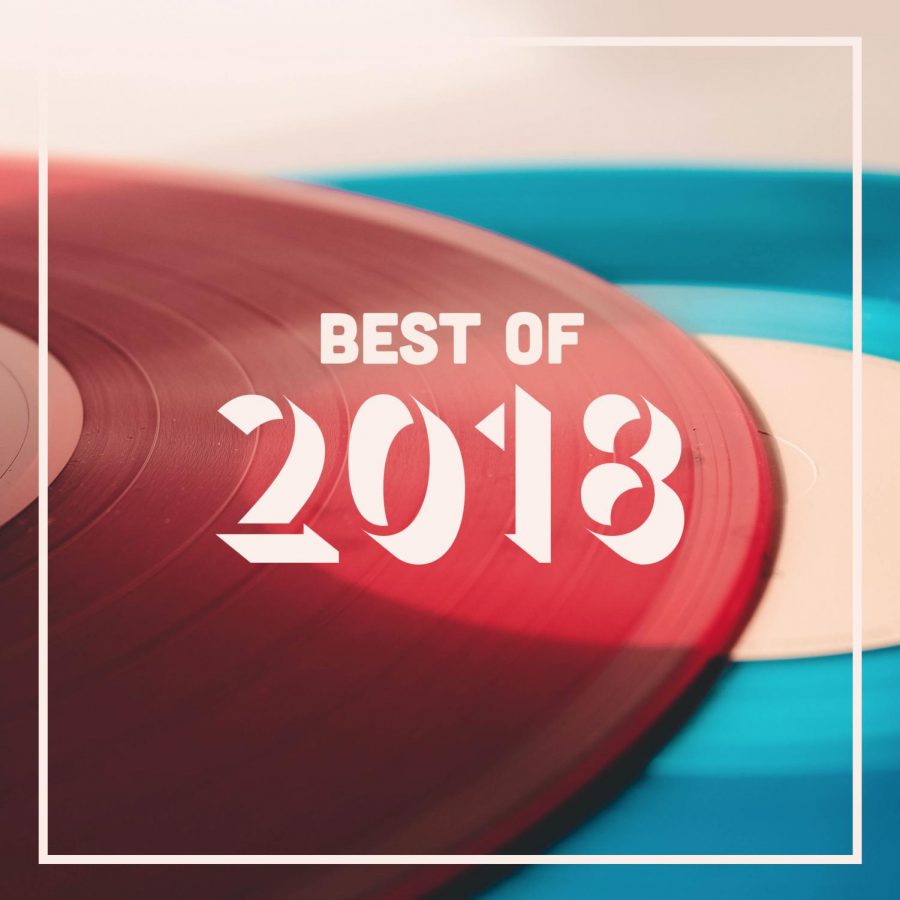 Perhaps it’s the turbulence and unrest in the world at large that made 2018 a particularly strange year in music. Releasing full-length, heavily promoted albums has become a less cyclical or required process, with singles, or even just throwaway tracks uploaded to SoundCloud, having more power than ever.

“I picked a good day for a recreational Percocet,” Ashley Monroe sings the stunning opening line of the third track on country supergroup Pistol Annies’ latest album “Interstate Gospel.” “I’ve got an itch to just get high.”

“I’ve got the hankering for intellectual emptiness,” Presley sings in her verse. “I’ve got the need to ease my mind / I’ll watch some reruns on the TV set / These are the best years of my life.”

The song is a masterful display of succinct, evocative songwriting, depicting women realizing the lives they worked for — in the roles they were assigned — weren’t everything they hoped.

The old Charlie can’t come to the phone right now. Drawing upon ‘80s and ‘90s R&B, his second album “Voicenotes” is lush with rich, calculated sounds and carefully crafted hooks.

The best song on the record is “Done for Me,” on which Puth enlists pop star in the making Kehlani, and they trade verses of accusations and defensiveness. It’s deliciously fun, with all its parts working in their engineered harmony.

The warm synths and reverb draw us in, the back-up voices perfectly nail the echoes of “no oh, oh baby, no” and Puth and Kehlani offer enough soul in their performances to make us forget the song is just hitting all the sensory notes it’s programmed to. “Done for Me” is as indebted to pop craftsmanship as it is to science.

Because all news is offered in equal representation — at any given time a Twitter feed can display a celebrity breakup, the ravaging effects of global warming and a football score side by side — escapism is increasingly difficult.

On “In My Dreams,” R&B vocalist Kali Uchis has created her own world to remove herself from the drudgery and disappointments of life. “Why would anyone stay awake after being so sound asleep?” she asks on the track. “Everything is just wonderful in my dreams.”

It’s a gorgeous, ethereal song, but there’s a lingering somberness as the cracks in her dream world grow and real life seeps in. “My mama’s never on coke / This isn’t my way to cope / Washin’ my mind out with soap,” Uchis sings of her alternate reality. Dreams don’t last forever, and neither will we.

“I don’t think I really had a point,” Lil Tracy told Genius of writing “Like a Farmer.” “I was just trolling.”

Is that not a point? On the track, Tracy parodies white Southerners with a fake accent and auto-tuned yeehaws, and with Lil Uzi Vert hopping on the remix, every lyric becomes more meme-able than the last.

Some choice bars: “I’m sippin’ lean like a Coors Lite,” “I swear these people need God,” “Yes, I have a tractor, you don’t like to fly / Took her on a trip to Texas, treat it like Dubai” and “I’m in Colorado Springs like I’m in Bora Bora.”

The humor of “Like a Farmer” is in its absurdist combination of stereotypes of the American South and SoundCloud rappers, like if the cowboy emoji had pink dreadlocks. It’s a song that could only exist in post-weird Twitter 2018.

Cardi B’s debut LP “Invasion of Privacy” saw the Bronx rapper trying on, and excelling in, a variety of styles, going toe-to-toe with the album’s impressive lineup of featured artists.

But among them, “Thru Your Phone” is the true original. The song depicts Cardi with a thirst for vengeance as she stands over her sleeping lover, having just discovered his infidelity by reading through his texts.

“Smash your TV from Best Buy / You gon’ turn me into Left Eye,” she sneers on a verse. But the chorus, juxtaposed, is even more scathing. Sung with songwriter Ali Tamposi, who is not credited as a performer, the hook is delivered with a sinister calm.

“Everyone was right about you now,” Cardi and Tamposi declare. “I looked through your phone last night / Saw some things I didn’t like.”

Not only does “Thru Your Phone” deliver the horrors of catching a partner cheating, but also the worst case scenario anxiety of having the contents of your phone shared with the world. If “Be Careful” is a warning, then “Thru Your Phone” is a threat.

On its second album, “Time ‘n’ Place,” British trio Kero Kero Bonito took the guise of a traditional rock band, adding guitar and turning away from the J-pop-inspired sugar rush of its debut “Bonito Generation.”

Yet, the band only got weirder. Lead single “Only Acting” begins as a straightforward, catchy indie pop song about feeling performative and blurring reality.

“I thought I was only acting / But I felt exactly like it was all for real,” frontwoman Sarah Midori Perry sings on the chorus. “I sure didn’t know it hurt so bad / That no rehearsal could show you how to feel inside.”

Halfway through the song, flashes of screams and glitches show the faultiness of the simulation the song is emulating. By the end, the track is in complete disassembly, terrifyingly distorted beyond recognition, the lyrics and production interacting with each other in a captivating way. This is “Don’t Hug Me, I’m Scared”-core surrealism.

Artificiality and authenticity are recurring themes in Scottish electronic producer Sophie’s oeuvre, likely because her work as an artist is so devoid of definition. Genre, as applied to Sophie, is a completely irrelevant, and even outdated, term.

On “Faceshopping,” this search for meaning beyond superficial labels and categories is applied to the human form. “My face is the front of shop,” vocalist Cecile Believe deadpans between Sophie’s industrial glitches and abrasive synths. “I’m real when I shop my face.”

Sophie sees the limits of language and the physical world, and perhaps human bodies are just as flawed. The form we’re born into is just a shell bastardized by beauty standards and conflated with an identity.

Moreover, “Faceshopping” showcases Sophie’s production past its provocative nature — it’s narrative as well. Her shifted and warped sounds present a binary of beauty and terror, and question what exists not in between, but unshackled from those constraints.

The titular theme of the British band’s third album “A Brief Inquiry Into Online Relationships” is often analyzed by the way the internet affects personal, everyday interactions, but “Love It if We Made It” captures the individual’s relationship to the greater online world.

Delivering a career-best vocal performance, frontman Matty Healy shouts the tweets we would normally scroll right by, like he hopes we won’t ignore the information if presented this way. The chorus bursts like a beam of positivity through the muck.

The song is less of a meditation on the specific events described lyric by lyric, but rather the means by which they are delivered. Healy opens the track with the line, “We’re f–king in a car, shooting heroin / Saying controversial things just for the hell of it.” What will it take to maintain attention in a time of mass desensitization? The 1975 doesn’t know the answer, but would love it if there is one.

The entirety of indie rock supergroup Boygenius’s fantastic debut EP shows its members, recent breakthroughs Phoebe Bridgers, Lucy Dacus and Julien Baker, playing off each others’ strengths, and it’s most exemplified by “Me & My Dog.”

The lyrics find the glow of new love with a tinge of anxiety. “I had a fever until I met you,” Bridgers croons. “Now you make me cool / But sometimes I still do something embarrassing.”

By the end, the women are longing to be far away, looking down on the versions of themselves crippled by self-doubt. “I wanna hear one song without thinking of you,” the song concludes. “I wish I was on a spaceship / Just me and my dog and an impossible view.”

But really, “Me & My Dog” is a tribute to friendship. The way the women lift each other up between whispered confessions of uncertainty, leading to a celebrated desire to run away, is an expression of the kind of bond that means so much more than the one with whoever is triggering that self-doubt in the first place.

The fact that the members of electropop duo Let’s Eat Grandma, Rosa Walton and Jenny Hollingworth, are childhood friends makes their expression of miscommunication and the struggles to come to mutual understanding on “It’s Not Just Me” all the more moving.

Produced by Sophie, marking her second appearance on this list, sweeping synths soundtrack the singers as they run through missed opportunities for connection in realizing feelings were mutual all along.

“And just when we discover that we need each other / Here our lives keep pulling us away,” the song opens, questioning if it’s too late for a relationship.

“It’s Not Just Me” also features an all-time great lyric about texting, not written by Drake: “I don’t wanna say goodbye / Guess I’ll see you as the screen is vibrating.”

The song is a poignant callback to all the times you thought there might be potential for a relationship with another person, but shrugged it off — you could text them about it later if you worked up the courage. You never do, and when you realize they felt the same the whole time, it takes you right back to that initial spark.

“We knew though years do change / We’d always feel the same,” Walton and Hollingworth sing. The song never specifies if the relationship in question is romantic or not, because it’s beside the point. It’s about the clarity of finally seeing eye-to-eye, shed from reservations, no longer dancing around real feelings. It might be an increasingly rare phenomenon, but it’s more joyous than ever.