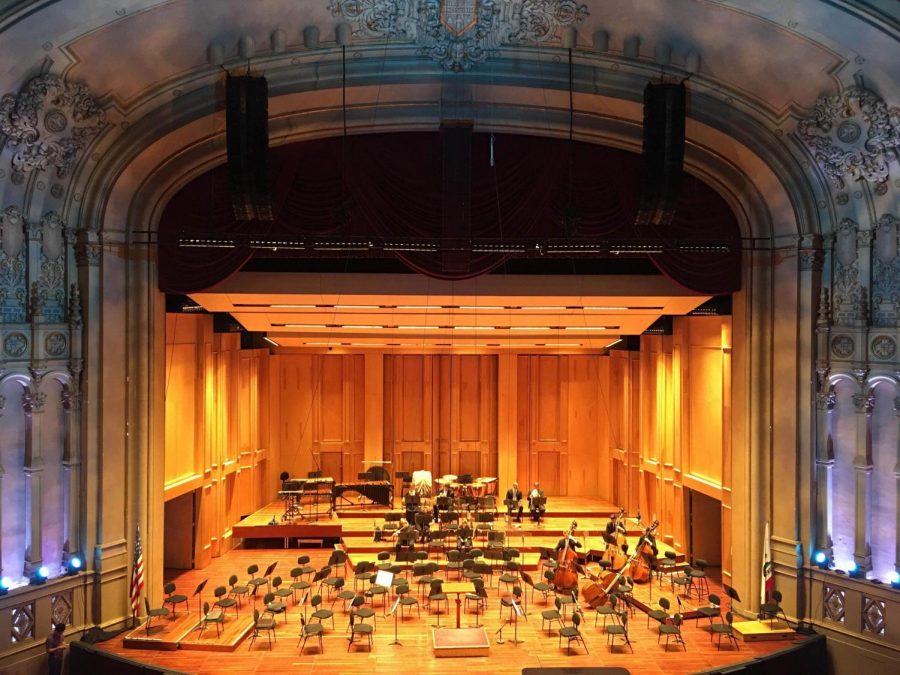 The artistry and complexity of the symphony is something San Diego State music professor Sarah Skuster can attest to. Her life and experience as a musician led her to choose a path in the symphony scene as well as her role as a mentor at SDSU.

As part of the San Diego Symphony, she performed alongside Grammy-nominated pianist Joyce Yang on Oct. 7 in Copley Symphony Hall for a congregation of people from all backgrounds and ages.

Two distinct, emotional pieces were played that night. Yang performed Edvard Grieg’s nostalgic Piano Concerto in A minor Op. 16, followed by the San Diego Symphony’s performance of Ludwig van Beethoven’s classic Symphony No. 7 in A major Op. 92. The show itself was one of the first to kick off the symphony’s Jacobs Masterworks concert line up of renowned musicians, vibrant conductors and operatic singers.

Skuster’s ardent love for music manifests itself through her personal experiences she shares with others in regards to her long history as an oboe player, as well as discussing the difficulty, patience and rewards that come with following the career.

“I mean, it’s my whole life,” Skuster said of playing the oboe in an interview with The Daily Aztec. “I’ve dedicated my whole life to it, and I wouldn’t change anything about that.”

Challenging and rigorous, a spot in the San Diego Symphony means more than just the bare minimum of dedication it takes to stick to a simple rehearsal and performance schedule. The symphony’s daily practice requires a high degree of dedication from its own musicians.

Skuster has been playing the oboe for about 25 years and enjoys playing in the symphony’s numerous concert events. Her journey as a musician took root as early as elementary school and has continued up to the present day.

Skuster said she is grateful to have been born into a musically-inclined family. Growing up in a musical environment led her to be quickly enamored with the diverse sounds that an oboe can provide to an orchestra.

“My parents both really loved playing classical music,” she said. “Even before I started playing the oboe, I grew up hearing it.”

Throughout her years in school, Skuster pursued the oboe, seeking a mastery of the instrument. After a myriad of rehearsals and concerts in her formative years, Skuster said it didn’t take long for her to decide to pursue a professional career in music due to encouragement from family and music mentors.

Skuster’s years-long commitment to the oboe led her to audition for the San Diego Symphony in 2009.

According to Skuster, the audition process is quite strict. Between musicians paying their way to audition with their own finances and despite the contest between one hundred or so auditionees, only one musician would receive the chance to become the principal oboist for the symphony. For Skuster, the road to the auditions consisted of long practices and strict attunements to the oboe; in her case, the process resulted in success and a place in the San Diego Symphony.

While Skuster said she is fortunate to have been chosen as the principal oboist in the San Diego Symphony out of all the other auditionees, she does not dismiss the hard work and efforts of the musicians who auditioned for the symphony and got turned away in the end.

“Going into music is kind of an obstacle in itself because it’s very difficult and very competitive,” she said. “Sometimes you’ll play for five minutes and that’ll be it. That’s just the difficulty of trying to get a good job as a musician.”

In addition to playing the oboe for the San Diego Symphony, Skuster also teaches the oboe at SDSU, providing private lessons for two students this year. One of Skuster’s pupils is music senior Christian Arroyo.

He said Skuster’s demanding, yet patient and understanding attitude with her teachings result in impressive sessions with his mentor.

“She’s easy to communicate with,” he said. “And (she) is very patient with her students.”

Arroyo has attended a number of San Diego Symphony concerts himself and commends the symphony performances as remarkable experiences.

“The level they play at is beyond what you can hear from a recording,” he said. “There is nothing like hearing it live.”

Skuster said her time as a professor of music has led her to improve her own skills as a professional musician.

“I think it’s important as a professional musician to teach and to play because teaching helps me become a better musician,” she said. “It helps me articulate what I’m looking for in my own playing much better.”

In looking back at her career as a professional musician and the steps it took to get where she is today, Skuster said she is grateful for the many opportunities she has experienced with the symphony and with teaching. Despite the success she has found, Skuster still acknowledges there are persevering musicians out there still searching for their niches in the music business.

“For some people, they toil away for years and they don’t get that clean of a resolution (that I have),” she said. “I’ve been exceptionally fortunate and of course, it’s worth it for me, but everyone has their own individual story.”

Skuster is a tenured musician for the San Diego Symphony and will continue to give her private lessons as a music professor at SDSU. Skuster will perform for San Diego Symphony as the orchestra’s principal oboist for the entire 2018 to 2019 season and beyond.