Aztecs fall to Gauchos in final game before conference play 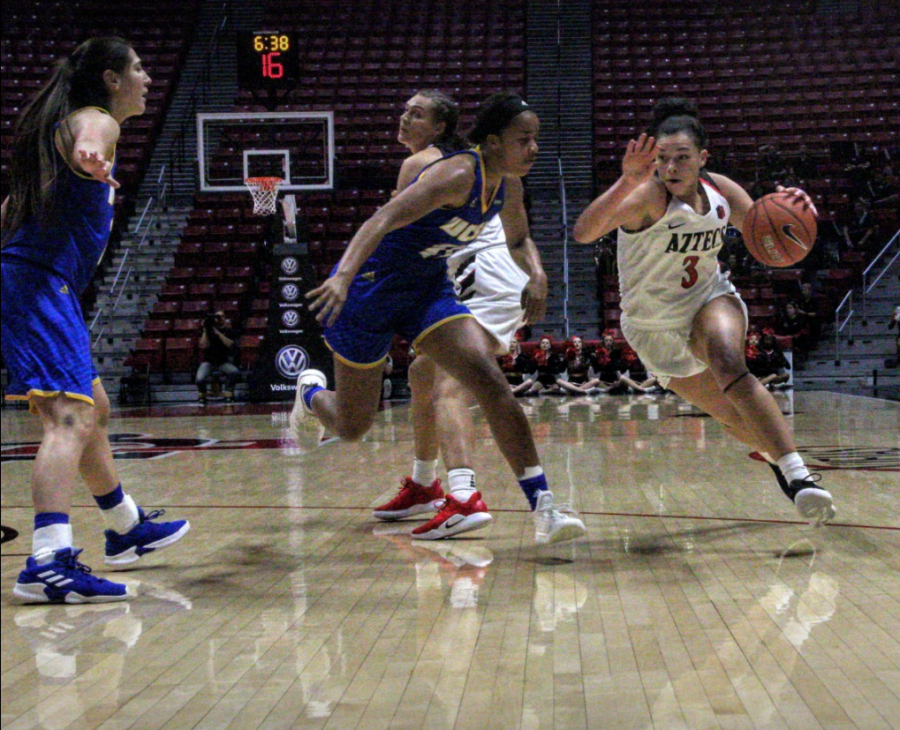 Freshman guard Mallory Adams attempts to drive to the hoop during the Aztecs' 63-58 loss to UCSB on Dec. 21 at Viejas Arena.

The Aztecs got off to a bad start, allowing a 12-0 run for UCSB. The momentum stayed with the Gauchos for the rest of the first quarter.

SDSU refused to give up that easily, however.

Things began to change in the second quarter, after the Aztecs went on a 9-0 run to make the score 27-22.

Freshman guard Mallory Adams, who led the Aztecs with 17 points and five rebounds, said when the team has a bad start, they regroup and focus.

“We sometimes struggle in the start,” she said. “Eventually we’re kind of like, ‘okay guys, time to get it together’ and coach usually calls a timeout. We get our minds right,  regroup, and come up with a game plan. We have a good game plan it’s just the execution in the beginning sometimes.”

Adams and Ramos have both made big contributions to the team.

Adams said she did not expect to be put in this position as a young player, but her team helps with the pressure.

“This has been a much bigger role than I ever imagined it would be so early,” she said. “But we’re with a really good group that understands that we’re stressed and fragile sometimes, and they just really keep us calm.”

Ramos agreed and said that the relationship she has with her team off the court transitions to games.

“I think coming in our coaches kind of prepared us for what we were coming in for,” she said. “But you can never prepare yourself until you’re actually here. We’ve been lucky enough to have some really good teammates who have really welcomed us in and allowed us to adjust to the college life off the court, which has made it that much easier on the court.”

“We won’t remember this loss,” she said. “We’ll get over it and we’ll just come back and practice.”

Head coach Stacie Terry said the adjustments and errors made defensively made it hard to stop Miller.

“We let her get loose early in the first half,” she said. “In some situations that normally wouldn’t have happened. We have people playing minutes that they’re not used to playing, so we made some defensive errors. You just have to stay connected to (players) that can shoot the ball and score the way that she can. She’s a really great guard and she’s deceptively quick and uses her body well. We’re playing short-handed so we have a lot of people trying to make up for the players that we have out.”

Ramos said even with one of SDSU’s best defenders, sophomore guard Kennedi Villa, Miller, whose 29 points included 18 from the 3-point line, was still able to dominate for the Gauchos.

“She’s a good player,” Ramos said. “We put one of our best defenders (Kennedi Villa) on her and she came in and did her job. Sometimes it’s just hard containing an offensive player that can shoot and get to the basket.”

The game wrapped up the Aztecs non-conference play for the season.

Adams said the team was able to build during the non-conference play.

“Preseason is where we’re going to build because we’re young and this is really new for a lot of us. The main goal is conference we have an eight-day stretch of practice and we really need to get better during that time.”

Sophomore guard Naje murray was helped off the court after she took a hard hit to the floor with less than 10 seconds left in the game.

The Aztecs have been dealing with injuries with their leading scorer Tea Adams out due to an ankle injury.

Terry said SDSU can look forward to seeing Adams geared up and back on the court for the new year.

“She’s getting better every day, it’s daily progress,” she said. “We’re going to focus on that for the next two weeks. I’m sure she’ll be ready for conference.”

Ramos is also battling an ankle injury and did not practice a majority of this week.

“She decided to tape it up and go because she loves her team and wanted to give us a chance to win,” Terry said.

Terry said she hopes that the two-week break will allow the players to rest and heal.

“Over the next couple of weeks we have a long break so we’re going to use this to get healthy,” she said. “We’ve been hit with the injury bug pretty tough this month. This is a break that they need so we’re going to take full advantage of it.”

The Aztecs begin their MW play against Boise State on Jan. 5 at Viejas Arena.

Terry said they will be ready for the challenge.

“We have in my opinion one of the best teams in the league starting against Boise State so we’ll be challenged early there,” she said. “But I know these girls are going to be ready and going to fight.”