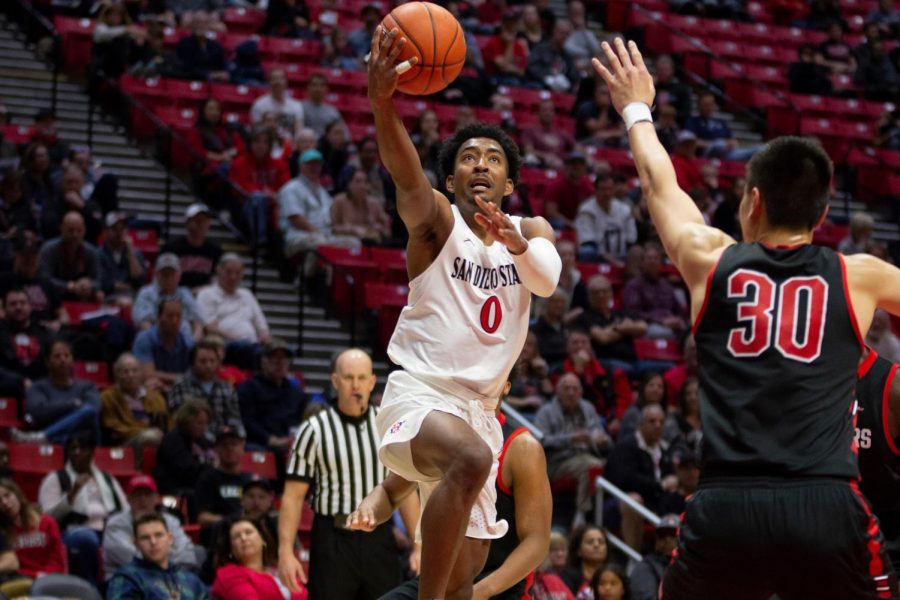 Senior guard Devin Watson attempts a layup during the Aztecs 65-60 victory over CSUN on Jan. 1 at Viejas Arena.

“The team showed its grit,” head coach Brian Dutcher said. “They bowed their back, they fought through frustration, they believed in themselves and they came out with a hard-fought victory.”

CSUN (6-9) was leading 60-58 with 2:12 remaining, before senior guard Jeremy Hemsley knocked down a three pointer to give the Aztecs the lead with 1:57 to play.

The Matadors, who shot 29 percent in the second half and made only one of their final eight shots, would not score again, while SDSU iced the game with a layup and two free throws from senior guard Devin Watson.

Hemsley and Watson finished with 13 and 14 points, respectively, after both got out to slow starts in the first half.

Watson, the Aztecs leading scorer coming into the game, began 0-for-7 from the field and made his first shot with 5:34 to play before the half, while Hemsley scored his first points with just over two minutes to go before intermission.

Hemsley said the team finally found its rhythm in the second half.

“We weren’t really dwelling on the slow start we had,” Hemsley said. “We just look forward to what we could do better in the next half.”

The Aztecs were led on offense by sophomore forward Jalen McDaniels, who scored the first seven points of the game and finished with a team high 20 points and 13 rebounds, for his second double-double of the season.

McDaniels made five of the Aztecs nine field goals in the first half, and had scored half of the team’s points with SDSU trailing 47-32 with 11:59 to play.

“I told Jalen that was his best game of the year,” Dutcher said. “Jalen’s a high motor, so he’s usually going fast, but the difference is he was able to slow down.”

The Aztecs trailed 32-21 at halftime, after shooting only 28 percent from the field, including just 2-for-15 from behind the arc.

“I’m never going to lose my confidence,” Watson said. “My teammates believe in me as well as my coaches.”

SDSU’s deficit ballooned to 19 points following a 7-0 run by the Matadors with 15:12 to play in the game.

Freshman forward Lamine Diane finished with 23 points and 14 rebounds to lead CSUN, but was forced to the bench with his fourth foul with 8:36 to play in the game.

The Aztecs trailed by seven when Diane went out, but went on a 9-2 run to tie the game at 53 before he returned to the floor with just over five minutes left.

SDSU will now head to Boise, Idaho on Jan. 5 to take on Boise State for the Aztecs first game of Mountain West Conference play.