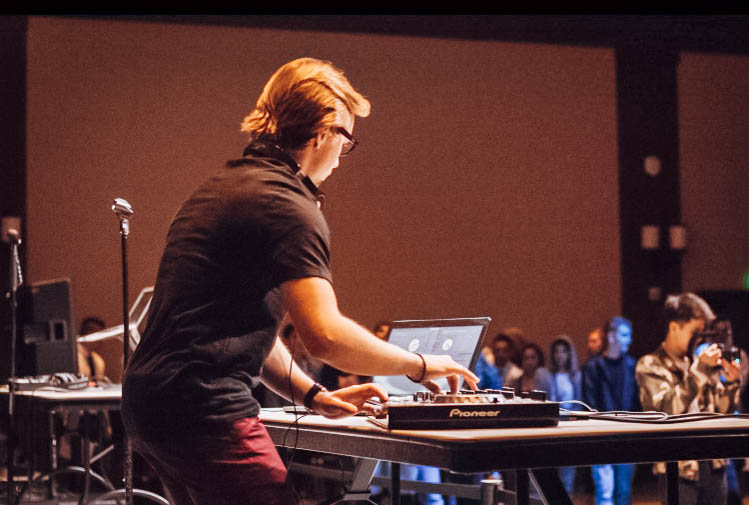 DJing has changed since the phenomenon became popular in Europe in the 1940s and spread to the U.S. soon after. It started as merely playing recorded music in nightclubs and on the radio. Today, it has evolved into something almost entirely different. With the rise of Soundcloud and other music sharing platforms, anyone with a phone or computer can record and produce music.

Devin Michalec, a senior marketing major, is part of the next generation of DJ’s and musicians using the internet to distribute their homemade mixes, generate a fan base and jumpstart their careers.

Michalec had a passion for DJing and electronic music from a young age. He said he remembers listening to his mom’s CD’s of several New York DJ’s and the music of Tiesto.  In middle school, he began listening to deadmau5 and Skrillex, and he fell in love with EDM and further developed his love of DJing.

“I remember I got a little plastic DJ controller from Bed, Bath and Beyond and I really dreamed about [DJing], but a lot of people made fun of me for wanting to do it,” Michalec said. “Not a lot of people are into that stuff where I am from.”

Michalec is from a small town in Pennsylvania and came to San Diego State with plans to broaden his horizons.

“I thought to myself that if I really wanted to understand more people and how other people act, I needed to get away as far as possible and see what other parts of the world were like,” Michalec said.

During his first year at SDSU, he upgraded from his Bed, Bath and Beyond controller and got his first piece of real DJ equipment and began experimenting, practicing and getting better day by day.

Kayla Arnold, a business management senior, lived in the same residence hall as Michalec their first year at SDSU and has been a fan ever since.

“I like how Devin’s music incorporates a lot of rap and hip hop music, rather than just EDM,” Arnold said. “He plays music that is universal and unexpected, which always gets people moving.”

This is the effect Michalec hopes his music has on people who listen to it, in addition to taking them on a journey. His travel and experiences inspire much of the music he creates.

“When I record my own mixes, I like to tell a story through them,” Michalec said. “I take inspiration from wherever I have gone and memories from these experiences and try to find the best way to express that and put it out there in a mix.”

However, he has found that it is challenging to accomplish this in a way that engages audiences and remains fresh. Having studied abroad in Vienna, Austria this past semester, Michalec said he was able to experience music in a different cultural context and has been trying to incorporate this into his new music.

“People in California love to listen to Hip-Hop and not so much the melodic dance music [of Europe], but I am trying to find a way to cross genres, which is pretty tough,” Michalec said.

When he is not creating music or performing, Michalec collaborates with other musicians at SDSU, like senior construction engineering major Jacob Andrews.

Michalec and Andrews have collaborated on several occasions. Michalec has produced some of Andrews’ songs.

“I’ve only worked with one other DJ, and it wasn’t the best experience,” Andrews said. “Working with Devin was different because he’s a friendly, down-to-earth dude who simply loves music. He is super open-minded and allows the artist to be creative with no restraints.”

Michalec releases his music on SoundCloud under the name Nived and is going to be releasing a demo pack soon.